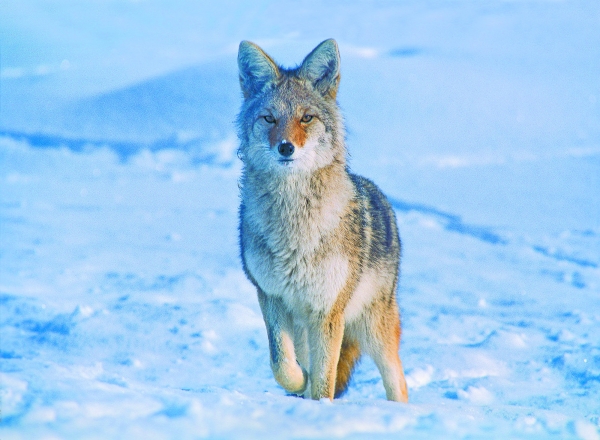 To my surprise, this small female coyote followed me through the snow on a January morning for a little over an hour, leisurely roaming to within thirty feet of me on several occasions. She will always be Little Coyote to me.

Little Coyote lifted her head from the bank of fresh snow in which she had been poking and digging, probably hunting mice or some other sustenance.  There seemed to be no urgency in her search – indeed, she looked well fed for midwinter – more like she was just going through the motions of a timeless habit.

She looked toward me, but not really at me, and without the wary caution typical of my encounters with her kind.  Usually coyotes break into a quick trot away with a couple of quick glances back over their shoulders as they become nothing more than a speck in the middle of my camera frame.  Then they disappear over a ridge or through some trees.

She was perfect! Not merely photogenic, but flawless. The soft sun of this winter morning cast an exquisite light on her bushy winter coat as she followed me through the freshly fallen snow of a storm that had come the previous afternoon and had broken up during the night.  At times she almost seemed to pose, her stance biblical, her colors and glistening eyes striking against that white landscape.

She was easily one of the most beautiful wild creatures that I’ve ever seen.  On the left side of her head was a tiny bald spot about the size of a dime – a reminder that nothing on this planet is really perfect, nor needs to be to still be magnificent.

Little Coyote had found me a while earlier when she appeared atop a prairie ridge as I plodded across this meadow in Wind Cave National Park at the southern edge of the Black Hills.  To my astonishment – and nervousness – she sprang forward, down the hill, and came at a dead run through the snow straight toward me.  I wasn’t quite sure what to do.

I suddenly remembered that I was a photographer and fumbled for one of the cameras hanging on me.  Before I could do much else, she applied her brakes and came to an abrupt halt, sending snow flying all about. Another shot missed!  Quickly I focused on her, hoping to get at least a couple of images before she beat the usual retreat which I fully expected.

It was then that Little Coyote chose to lay her biggest surprise on me.  She stood fast in the fresh snow.  Not as though she was trying to intimidate me, but more like she wanted to communicate with me – to encourage me to look at something differently than I had before.

I collected a few images and then felt the urge to continue my trek, just to see what she would do.  Another surprise – she began to move with me.  Over the next hour or so she would be my constant companion, moving parallel to me across the snowy plains.  At times she approached to withing thirty feet or so.  When I stopped, she stopped.  Twice I sat down in the snow and she did likewise.  I could not dismiss the feeling that she was mimicking me.

There was something so human about Little Coyote, as though she was actually aware of the bewilderment her unusual behavior was causing me and reveling in it.  Perhaps it was just her way of rubbing my face in the arrogance of my own species, telling me we just don’t know as much as we think.

I fancied that she would at any moment change her physical appearance, perhaps becoming some mysterious or mystical woman with an epistle from the creator, something that would forever change humankind’s perception of the universe or our place within it.

There is a precedent in this idea.  Coyote is a central character and personality throughout Native American folklore and tales that were told and re-told in Cheyenne tipis, Mandan earth lodges and Navajo hogans.  This oral tradition served many purposes, from entertainment to explaining tribal origins to emphasizing the value of proper behavior.  There were almost as many names for Coyote as there were tribes: Trickster, Imitator, Old Man and Changing Person being only a few.  And Coyote played everything from hero to fool.

Much of this cultural heritage has not translated well into the analytical structure of Western thought, but that is no reason for us to forgo the attempt to understand.  In his book Giving Birth to Thunder, Sleeping with His Daughter, author Barry Lopez writes, “In the Coyote stories, is more than we, with all our tools of analysis, will ever fathom.  We should not feel either embarrassed for it or challenged.  To touch them deeply would be like trying to remember the feeling of years of living in the open.  We have passed it by eons ago.”

Perhaps that was the message Little Coyote was delivering to me this morning.  Twice since that January day I have seen this furry little temptress again, recognizing her by the little bald spot on her head.  Not once during those succeeding times has she approached me or allowing me anywhere near her as she did during our first encounter.  She simply turned and ran away.