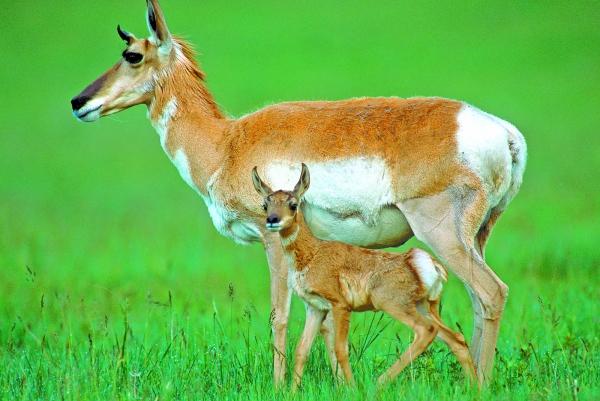 The young pronghorn doe appears undisturbed as I make my way up the grasslands slope towards her. Occasionally she lifts her head from feeding to throw me a quick glance and look about, but quickly returns to the business at hand. She is obviously pregnant with twin fawns, though probably still about a week away from birthing – maybe more.

The place is Custer State Park, a little over an hour after dawn, but again the morning has been a bit disappointing. No fawns. During the last week or so, I have spent several mornings in the southern hills checking out pronghorn does like this one as I play the waiting game that always goes with this time of year – waiting for the coming of the pronghorn fawns.

Not surprisingly, it appears that they will be a bit late this year. Usually, I begin finding these beautiful and fabled little creatures around May 15 – 20, but not this year. No doubt, this lateness is due at least in part to the effects of last December’s fire that swept through Custer State Park and onto Wind Cave National Park as well as private land. Many of our “spring things” like the bison calves and certain perennial flowers have been delayed, though the land is rapidly healing itself.

The face, yea the eyes, of a newborn pronghorn fawn give a whole new meaning to the word “adorable.” Just seeing one of those precious faces peeking from beneath the grass makes it a fresh and new experience each year, one that I can never deny myself.

Typically, a newborn pronghorn fawn immediately enters the most critical part of its life – the hiding phase. At birth those tiny legs lack the stamina that will eventually carry them across the grasslands at speeds of 70 mph and they are easily run down by swift and clever predators like the coyote.

The hiding phase will encompass 3-4 weeks during which the fawn will remain, for the most part, motionless and lying in the grass. The mother will return to its side several times a day for care and feeding, afterwards re-bedding them in a different spot. If the doe has twins, which is usually the case, she will bed them separately – probably several hundred yards apart. This helps insure that at least one will survive this crucial phase.

As expected, the pregnant pronghorn does are gravitating to areas of the parks and land that were undamaged by the fire. Though the grass is quickly returning to the burned areas, it will be short for much of the summer, thus providing little cover for the fawns.

In the meantime, the wait goes on. I have seen a couple of does this morning that look as though they could give birth any minute, but you never really know for sure until you find them. One year I didn’t find my first fawn until June 10.

© 2018 All Rights Reserved Dick Kettlewell (unauthorized reproduction of these photos is prohibited.)

SCROLL DOWN FOR PHOTO GALLERY