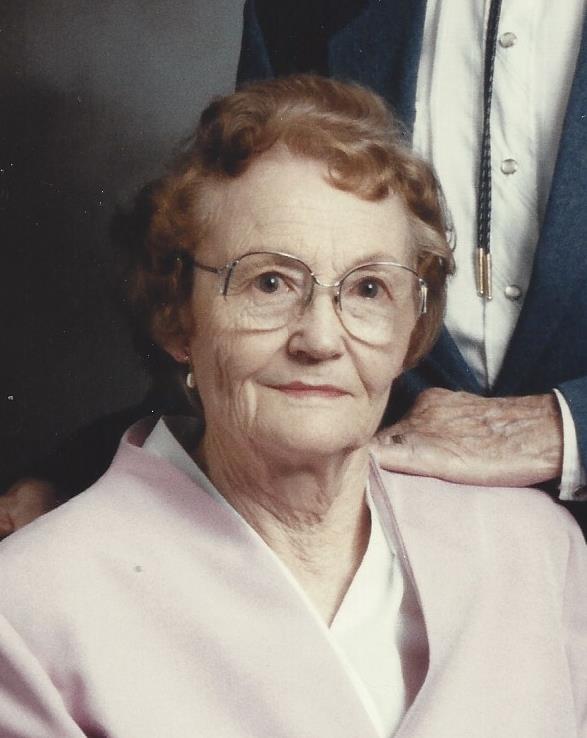 Rose was born on April 28, 1919 at her parents’ rural farm near Rapid City, to Seth M. Hulburt and Ida M. (Tree) Hulburt.  She and her identical sister Mary were the second to the youngest of six children. Her primary and secondary education was completed at the Caputa, Stoneville, Hermosa, and Rapid City school systems. Post-secondary education included Sioux Falls College, Sioux Falls, and Presbyterian School of Nursing, Denver Colo. While working as a nurse’s aide at the Sisters Hospital in Hot Springs, she met her future husband Joel C. Rickenbach at a Methodist youth gathering at Oelrichs. Her Christian life began at 8 years of age when she and her twin sister were baptized at the same time in Rapid Creek.

Rose and Joel were married February 27, 1942 at her parents’ home in Rapid City. Together they continued working with his parents on the L.O. Rickenbach ranch eight miles east of Oelrichs until 1999. She and Joel retired in Oelrichs where she resided until 2016.

Some of her of gifts included singing duets with her twin sister at different gatherings, home decorating, dress designing, cooking, and gardening. She was gracious, compassionate, gentle, considerate, creative, artistic, and a very gifted homemaker. Some of her remembered teachings to her children were Let your head save your heels, and A Nurse is a teacher of health all her life. Mom always was given to hospitality and never turned away someone who arrived at the ranch around meal time or when workmen were present for a project. She was active in the local United Methodist Women, the Cowbells, and in personal Bible reading. She was known for taking care of the Oelrichs church flower garden in her later years.

She was preceded in death by her parents Seth and Ida Hulburt, her three sisters Violet Alkire, Hazel Powers, Mary Gaffin Wagner (and spouses,) brothers Wayne and John Hulburt (and spouses,) and her husband Joel C. Rickenbach.

Memorials may be sent to the Prairie View United Methodist church and designated for the Red Cross, The Gideons, or M.A.D.D. (Mothers Against Drunk Driving.) The family wishes to thank all who have sent their condolences, cards, gifts, and flowers as well as for phone calls, visits, and all your prayers and support at this time.