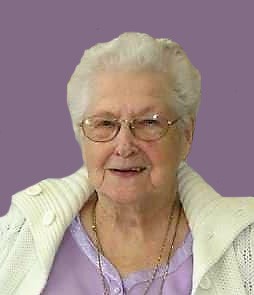 Carolyn was born in Unity, Wis., the daughter of Charles Henry Kuester and Grace Bertha Mardon Daehn. She graduated from Hutchinson High School in 1937. Carolyn married Henry Harold Mar on April 12, 1939, in Hutchinson, Minn.; to whom one daughter was born on August 30, 1940, Gloria Grace Michele in Superior, Wis.

Carolyn and her family lived in Minn., Wis., and moved to Brooking, in 1945. While living in Brookings she worked at the Brookings Steam Laundry and the Quick Lunch Café. When her husband opened their Saw Sharpening and Gun Smithing business she helped him in the shop as he had Muscular Dystrophy. She moved to Hot Springs in 1995 to be closer to her daughter on the ranch.

Carolyn was a member of St. Thomas Moore and TOP’s #143. Her hobbies were african violets and making afghans for her many great & great great grandchildren. Her whole life revolved around her grandchildren.