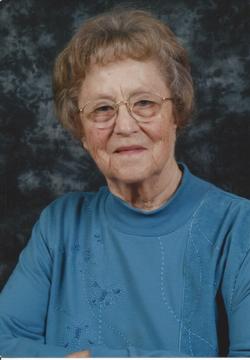 Helen attended Gull School to the 8th grade.  She then boarded in town for a couple of years to attend Edgemont High School.  She graduated in 1948.  On October 14th of that year she married Mason Moore Miller in Edgemont.  They had three children: Helen Marie, James Allen and Michael Mason (who passed away at the early age of 14 mo.)

Helen was a ranch hand wife in her early marriage and honed her cooking skills making meals for the other ranch hands.  Helen and Mason lived on several ranches before settling on their present ranch at the mouth of Red Canyon outside of Edgemont.

Helen worked as a livestock sales barn clerk, Railroad Hotel staff and drove a garbage truck, but her favorite job was a cook for the Edgemont School district, which she did for 15 years.  She served on the Argentine Election Board for many years and was a very active member of the American Legion Auxiliary.  She was a member of the United Methodist Church for over 50 years.

Funeral was held at 2:00 p.m., Saturday, April 15, 2017, with a visitation one hour prior to services, at the United Church in Edgemont with Rev. Kori Lehrkamp and Rev. Bob Deumig officiating.  Interment followed at the Edgemont Cemetery.

A memorial has been established in Helen’s name to benefit the Edgemont Volunteer Ambulance Building Fund.

Arrangements were placed in the care of Chamberlain McColley’s Funeral Home in Hot Springs.