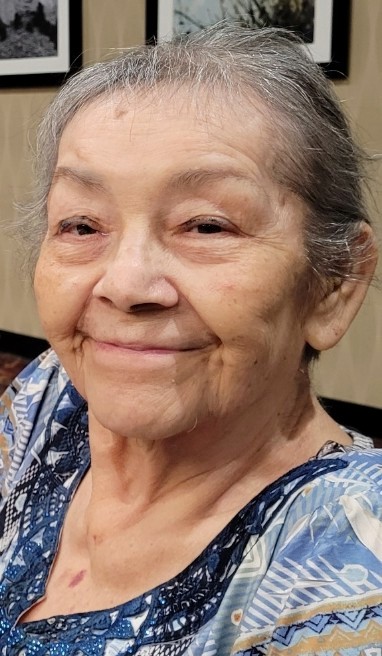 Flora “Flo” L. Young, 78, passed away peacefully at home on January 17, 2023. She was surrounded by her loving family and her pets. Flo was born February 27, 1944 in Igloo, S.D. to Catherine (Irving) Young and Duval “Babe” Young. She was the first of four daughters who blessed the couple.

She was a natural leader and became the matriarch of her family and a respected elder. Flo and her sisters, Frances “Tiny” Young, Helen Merrill, and Judy Carroll were very close growing up and through their adult lives. Family was very important to Flo and she was very protective of her loved ones. She attended schools in Hot Springs, S.D., Holy Rosary Mission (1953) and in New Castle, Wyo.

In 1961, she married Johnny Still who previously served in The United States Navy but was known for being a singer and pilot. The couple had three children; Tammy, Tim and Tina. She later married Burgess “Jumbo” Ghost in 1970 upon his return from Vietnam and they had two children, Tara and Antoinette Rose.

She worked for the V.A. in Hot Springs in the 1980’s and later worked at Sturgis Fort Mead V.A.  S.D. and later Phoenix, Ariz. She attended Black Hills State starting in 1988 and majored in Arts and Theater. Flo was a natural artist. She loved to experiment on canvas with bright colors and to create traditional Native American scenes. She had an outgoing personality, and a laugh that could be easily identified anywhere she was.

One of her favorite past times was playing bingo. When the number she needed was next up in the monitor meaning she would win when it was called out, she would get so excited!  She would laugh and shake her hands back and forth, the whole table would celebrate a win when Flo got to yell bingo.

She was a very hard worker and was always the first to arrive and the last to leave. When she worked in Phoenix she became the first female host “Hostess with the mostest” is what she would say. She retired from this VA in 2002.

She returned to her hometown, Hot Springs after retiring and loved to spend time with her dogs Irish, Tootsie 2, Lucky, and Xena. She also loved her bird Tweety; over the years she had many Tweety’s and Petey’s.

Visitation was held Wednesday, January 25, 2023 at Chamberlain-McColley’s Funeral Home in Hot Springs, folowed by a luncheon at the American Legion.