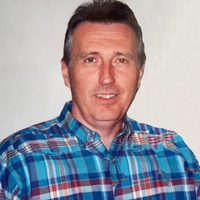 John Rowe, 78, of Hot Springs passed into eternity to be with his Lord and Savior, Jesus Christ, on the 9th of September 2022.

John was born and raised in Union, N.J. He had a rough-and-tumble youth and was constantly playing pranks and sports with his buddies. After graduating high school, he joined the U.S. Navy and served from 1961-1967. During his time of active duty, John was a signalman aboard a destroyer. As part of the blockade during the Cuban Missile Crisis, his ship turned back a Russian submarine.

A public servant for most of his career, John was a police officer in N.J., from 1969-1973. He moved the family to Colorado and worked his way up from patrolman to chief of police. John also was a Victim’s Assistant Coordinator. In 1980, God called him into the ministry. John served as a senior pastor in several churches in Colorado, Wyoming, Nebraska, and Kansas, before retiring in 2010.

John and Pat moved to Hot Springs in 2008. From that time, they frequently attended church and were involved in many local activities; they both served on the board of Community Action.

John had an appreciation for many musical styles but was especially fond of songs from the doo-wop era. He enjoyed singing and was self-taught on the guitar and keyboard. He wrote several original Christian songs and lead worship with Pat in numerous churches.

He loved taking walks, was an avid reader, and loved studying and teaching the Bible. John’s life’s mission was to share the Good News of Jesus Christ—His free gift of salvation—with everyone.

In January of 2021, John became a resident of the Michael J. Fitzmaurice State Veterans Home.

John loved people and had a caring, compassionate heart toward everyone. He now returns to the loving arms of the Heavenly Father he so faithfully served.