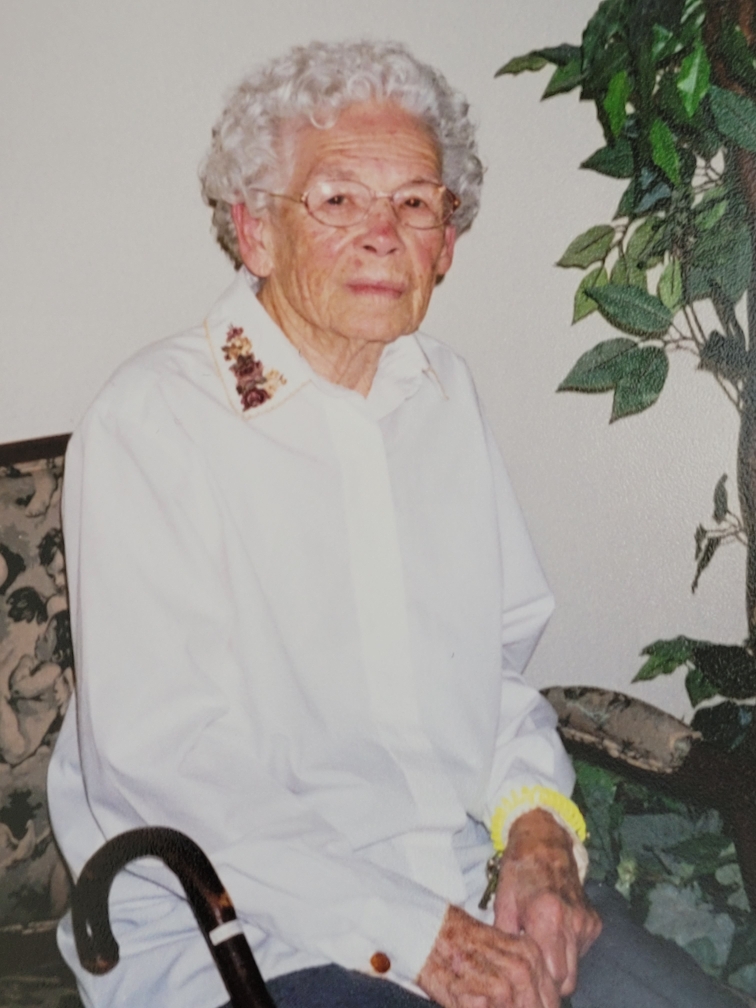 Grace Victoria (Wight) Kearney passed away to join our Heavenly Father on March 6, 2020. She was 106 years old and had enjoyed a long, interesting, and productive life.

Grace was born at the family farm near Oral, S.D., on January 27, 1914. She was the sixth of eight children born to Ida May (Eastman) Wight and Ernest Eugene Wight. As did her siblings, Grace lived and worked on the family farm and attended Morning Star School through the eighth grade.  During her high school years, she lived with and worked for various families in Hot Springs while attending school there.  She graduated in 1931. Because she was so young, she had to wait until January 1932, to enter her chosen nurses training school at Scottsbluff, Neb. In 1934, while still in nurses training, Grace met and then married Charles Chace Kearney, who was born and raised at Morrill, Neb. Later that year she stopped nurses training to become a mother, take care of family, and work as a vocational/practical nurse. To this union three children were born: Patricia Jeanne – 1934, Charles William – 1938, and John Larry – 1942. The family moved to and lived in multiple locations:  Morrill, Neb. (several times); Monroe (and other towns), N.Y.; Hot Springs; Long Beach, Lakewood and Angelus Oaks, Cali.; and Prescott, Ariz., which was Grace’s final home of record.

Grace went back to and finished her nurses training, becoming a Registered Nurse in 1961, the year after her youngest son (John) graduated from high school. She loved newborn infants and worked in the maternity wards of several Long Beach, Cali., hospitals and also with an OB/Gyn specialist.

Grace and Charles moved to Angeles Oaks, in 1973 after Charles retired, but Grace continued to work at Redlands Community Hospital until their home in the mountains was paid for. Together they spent their retirement years with Angeles Oaks as their home base, and they were free to go and see as they wanted. After Charles passed in 1988, Grace continued life in the mountains and enjoyed the peace and seasonal serenities until 2001. She then moved to Escondido, Cali., and lived in an assisted living complex. In 2003, she relocated to Prescott, to live with her son, Charles (Bill) and his wife Arleen. Later (2005) she settled in the Willow Wind assisted living facility, Prescott,  for most of the rest of her life.

As a mom, aunt, grandmother, sister, friend, helper, supporter, counselor, advisor, teacher, nurse, confidant, gardener, naturalist, Christian, mediator, caregiver and Scrabble wizard she was known to be kind, wise, spiritual, patient, artistic, loyal, sharing, gracious, of course, true to her values, loving and loved. Her memory will certainly fade over time but her legacy will continue.