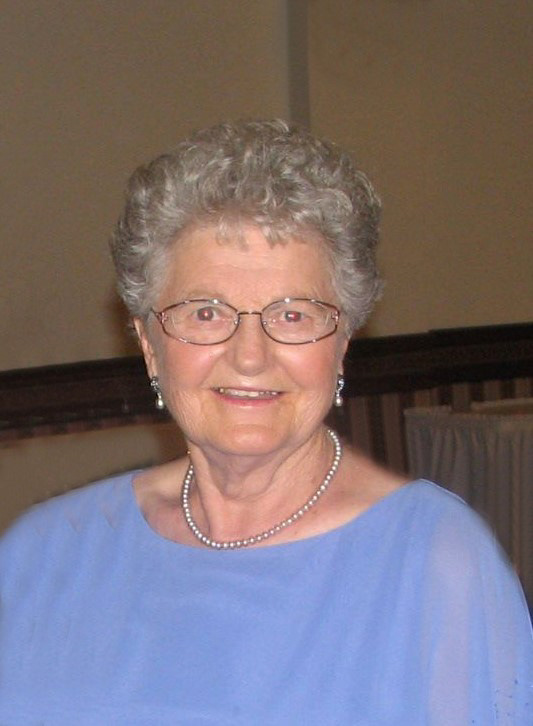 Violet was born in Sturgis, S.D. on April Fool’s Day, 1926. Yes, she survived 96 years of birthday pranks, which contributed to her fun-loving spirit and the mischievous twinkle in her eye. Her father left the family when she was three. After that, until her mother remarried, she lived, as her mother once said, “Anywhere we take our hats off.” It was during that time, she developed a close bond with her aunt, uncle, and grandparents who opened their homes to her mother, sister, and herself.

Violet grew strong during her adolescent years living in Ardmore, S.D. As a young girl, she had a passion for climbing trees and reading, which made her difficult to find at chore time. But, once out of the tree, she made work a creative endeavor. Her trusty horse didn’t mind if Violet’s nose was in a book while riding to bring in the cattle. Not only did she manage to read, ride, and get the Herefords home, but she also kept a lookout for rattle snakes. On one occasion, she killed a 4’ rattlesnake with her lariat rope, and proudly carried it home while leading the horse who refused to have a snake on his back. Ardmore is where she developed life-long friends, including one good-looking lad named Gene Inman.

When the school closed in 1942, instead of going to Hot Springs to finish her senior year, she stayed in Ardmore to help her stepfather on the ranch. Perseverance (some might say strong-willed) was one of Violet’s predominant traits. It enabled her to accomplish anything she put her mind to. This was the case in 1943 when she moved out of her parents’ home at the age of seventeen to attend Hot Springs High. She cooked and cleaned for her room and board and still found time to play on the basketball team, write for the school paper, act in plays and sing in the choir. After graduating in 1943, she defied her stepfather’s plan to return to the ranch. Instead, she started working at the Black Hills Clinic, a job she continued until accepting Seaman First Class, Gene Inman’s proposal of marriage while sitting next to him atop a Ferris wheel at the local carnival. The ceremony was held on August 13, 1945. They were happily married for 62 yrs. until Gene’s death in 2007.

To say Violet was an active person is an understatement; she was a go-getter. When she wasn’t hosting the knitting club, planning a card party, leading a 4-H meeting, twirling with square dancers, attending bible study, or sharing treasures with the local Seekers group; she was herding cattle, planting a garden, wallpapering a house, sewing teddy bears (over 300!), serving Communion at Mass, shopping for bargains, or visiting friends and family. Her hands were always busy creating projects, luckily, Gene, who would have liked to sit in his recliner more, adored her and helped bring success to her endeavors. On top of what she did in her ‘free’ time, she sold Avon, worked in a clothing store, traveled for the Crop and Livestock Reporting Service, and served meals to the Senior Citizens.

Violet was a caretaker. Many living things thrived under her care on the ranch she and Gene built near Hot Springs. For years, Angus cattle were the main livestock along with numerous types of poultry, and for a while, Dalmatian dogs were born and sold, but other nontypical farm animals found a home there including a pet chipmunk, snake, fox, magpie, and an antelope named Twinkle. Of course, raising five children was her greatest joy. In her 2006 memoir she wrote, “I thank God every day for our thoughtful kids and for our grandkids, to see them growing into compassionate, responsible people is the joy of my life.”

Memorials may be sent to St. Anthony of Padua Catholic Church in Hot Springs.

Arrangements have been placed in the care of Chamberlain McColley’s Funeral Home in Hot Springs, S.D. Condolences may be sent to www.chamberlainmccolleys.com