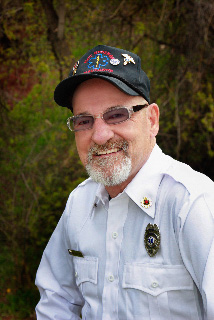 Donald “Don” Eugene Harden, a proud veteran of the United States Army, passed away surrounded by loved ones, at the VAMC in Hot Springs, Wednesday, January 5, 2022.

Don was born Donald Eugene James, Jr. to Donald R. James and Georgia Allene (Sheely) James on August 19, 1947, in Martinsburg, W.Va. His name was changed shortly thereafter and he was later legally adopted by Ernest L. Harden at the age of 8.

At the age of 18, Don was drafted into the United States Army. In 1967, he was stationed in Vietnam. There he served as a medic with a group of 350 soldiers designated as a mobile riverine force in the Mekong Delta. Some referred to them as “Tunnel Rats.” When his time of service was completed he re-enlisted the next day and served another 6 years.

During his time in Vietnam, Don was injured by shrapnel and was evacuated. Eventually he was transferred to Fort Fitzsimons, in Aurora, Colorado. Don was a soldier to his very core and received many military commendations for his outstanding service to our country, including a Purple Heart, Bronze Star, Combat Infantry Badge, Republic of Vietnam Campaign Medal, Army Commendation Medal, Vietnamese Cross of Gallantry, as well as National Defense Service Medal, Vietnam Service Medal, Good Conduct Medal, and Marksman Badge (rifle). When Don talked about his military time he’d often say, “I’d do it all again…in a heartbeat.”

Don was an integral part of the Hot Springs community. Throughout his time in Hot Springs he worked as a dispatcher for Fall River County, worked at the domiciliary at the VAMC, and worked at Sonny’s Grocery Store. Don joined the Hot Springs Ambulance Service in 1999, and volunteered as a EVOC driver for many years and became an honorary member when he was no longer able to drive the ambulance, due to his health. He loved being able to put a smile on a sick or injured person’s face and he didn’t mind driving fast either. He taught many a young EMT the ropes on how to operate an ambulance and the equipment in it, and he never missed an opportunity to drive the ambulance in a parade. He’d wave and tease, and throw out candy to everyone, not just the kids.

Don would often say “only the Good Man Upstairs knows,” and he always wore a cross around his neck. A good friend of his and he exchanged crosses many years ago and he swore he would never take it off and he never did. He loved playing poker and considered the Silverado in Deadwood to be a second home and the staff he considered to be family. He enjoyed riding his “motorcycle” to get the mail, just around town or taking day trips with friends; many of those day trips somehow taking them to Deadwood. Baseball was also a passion of his, with him rarely missing a game, especially if his Yankees, Braves, or Cubs were playing.

Don never met a stranger and was a ray of sunshine to everyone that he came in contact with. Joking, laughing and teasing was his way of communicating. He would often tease people taller than him by saying, “hey shorty,” and would threaten to take his teeth out and kiss you. He’d take his hat off and rub his bald head and ask, “how’s my hair look?” And you could usually tell where Don was from across the room by his loud greetings followed by laughter. Don will be greatly missed by so many, but he will always live on through our memories.

Don was preceded in death by his father, Donald R. James, Sr; his adopted father, Ernest L. Harden; his mother, Georgia A. Parker, who he described as “the love of my life” of Rapid City, S.D; his brother, Lewis “buddy” Craig Harden Jr. of Martinsburg, W.Va.; his infant son, Donald Harden, Jr; his son, Richard “RJ” James Harden of Arlington, Texas; and many other comrades, brothers, and friends.

He is survived by his four remaining children, Michael Harden, Juli Dellorso, Dawn Semrau, Allie Crittenden; seven grandchildren and those of you who have met him, worked with him, visited with him, played poker with him, and loved him.

A service honoring the life of Donald Eugene Harden will be held at the Chamberlain McColley’s Funeral Home, 401 N Garden St, Hot Springs, on Friday, January 21, 2022,  at 10:00 a.m. with lunch to follow at the Hot Springs Ambulance Service, 1861 Cascade Rd., Hot Springs.

If you are feeling ill please stay home, Don would’ve understood!! There will be no live stream of the service, but it will be videoed and attached to his obituary the day after the service.