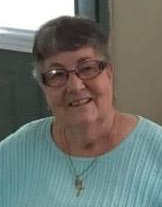 Alyce was born on November 6, 1941 at St. Aloysius Hospital in Spokane, Washington to George and Lucy Wilson. In 1948 Alyce’s parents moved to the 7-11 Ranch near Buffalo Gap, where her parents worked for F. O. Butler. Her dad worked in the dairy at the ranch, and her mother was the cook. In 1955 the family moved to Oral, S.D. where her parents bought a farm unit on the Angostura Reservoir.  Alyce also helped her mother run Lucy’s Dew Drop In.

Alyce worked at the Sisters Hospital. She worked 9 years at Paul’s Drugstore in Hot Springs. Alyce finished working at the Veterans Hospital in Hot Springs as a cook where she ended her employment with a WG 6 as her wage grade.

Following retirement, Alyce had a home in Yuma, Arizona where she would  spend her winters. After selling her home in Hot Springs, she bought a “tin can”, as she referred to her trailer, where she would spend her Summers.

Besides her living siblings, Alyce is survived by her foster son, and numerous nieces and nephews.

Services will be at a later date.