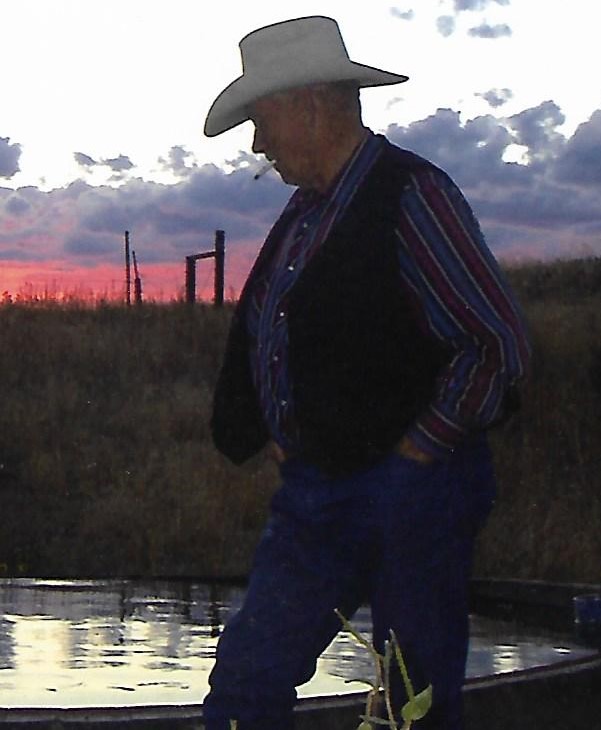 Carl Paul Hald, Jr, 92, passed away on October 15, 2021 at the Ponderosa Villa in Crawford, Neb. Carl was born October 29, 1928 in rural Oelrichs S.D. and lived in the Oelrichs area for the majority of his life, moving to Chadron Neb. in 2010. He was the son of Carl Peterson Hald Sr and Sara Mercedes Newman Hald.

Carl completed grade school in Oelrichs, then had to stay home on the farm because his father was recovering from a heart attack and he was needed to work the farm. Carl was drafted in the army in 1951 and received his GED during his time there. He finished basic training in Fort Leonard Wood and was stationed in Anchorage, Alaska working in an electric shop. He returned home to the family farm/ranch after his discharge in 1953.

Carl bought the Stoll place and built the home and ranch that he raised his family on. He married Bonnie Perkins in February 1966 and they had 5 daughters. He and his brother, Lyle, continued to ranch south of Oelrichs well past retirement age. Carl loved the life of a cattleman and wouldn’t have traded places with anyone. This spring, he will be watching the grass turn green and baby calves born from his place in Heaven with his brother, Lyle. Kristy and Jim will be sitting beside him as well.

Carl served as an officer on the Antelope Township until disbanded. Carl was proud to have been chosen for the Soil Conservation Home Beautification Award in 1979.

He also was a brand inspector for the South Dakota State Brand Board for many years. His travels to area ranches for brand inspections gave him another opportunity to visit with folks of his generation. Those old cowboys will all be missed someday.

Sundays in Summer often found Carl and his family enjoying the beauty of the Black Hills. Sunday cookouts with hand-cranked ice cream were also a common occurrence at the ranch. He loved the time spent with family and friends, especially time with his grandchildren and great-grandchildren. Fishing, building campfires, target practice, soccer games, derby cars, and mutton busting were just a few of the activities he shared with his grandchildren.  Family visits or a long visit with an old friend or neighbor was the highlight of his day in later years.

Carl had a large garden that the entire family tended.  Travelers often stopped in off the highway to ask if they could purchase produce from the garden. Many summer nights were spent shelling peas and snapping beans from the garden before they were canned. Every fall, the extra pumpkins were loaded in the back of the pickup and taken to Oelrichs for the school kids to have for jack-o-lantern carving.

When living in South Dakota, Carl spent many winter nights in the shop with his favorite hobby, woodworking.  He poured love into everything he made and enjoyed sharing his knowledge and love of woodworking with his children. When moved to Chadron, he spent his days in the woodshop making many treasures, including wooden toys. He donated many of the toys he made to the Hwy 20 Fireman Fundraiser auction in 2012.

Funeral services were held on October 23, 2021 at Chamberlain Chapel in Chadron, Neb., Burial followed at Hillside Cemetery in Oelrichs S.D.

Memorial donations may be made to the Oelrichs and Chadron Volunteer Fire Departments. Donations can be sent to Chamberlain Chapel, PO Box 970, Chadron, Neb. 69337