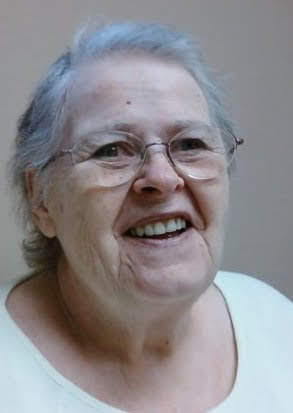 Teresa was born October 11, 1941, to Wayne and Mae Muhm. She was one of their nine children. She grew up in Igloo, S.D., on the army depot. When she became an adult she worked for a short period of time as a pin setter, for a bowling alley, then she found the love of her life, Jackie Philip Evans (Jack). In their wedded bliss they had six living children and one miscarriage, Steven and Sara Evans of Rapid City; Vernon and Donna Evans of Edgemont; Brian and Dinah Evans of Illinois; Wayne Evans of Edgemont; Robert Evans of Edgemont; and one daughter, Eva Mae and Wilson Nyquist of Edgemont.

Teresa’s love was always her family. She lived to help and be there for her family, doing whatever was in her power to help them. She has numerous grandchildren and great grandchildren, that she loved and enjoyed spending time with. She loved her missing vowels word searches and would do them for hours on end. She used to have a collection of over 2000 teddy bears.

Teresa was a homemaker and she made some of the most beautiful blankets and afghans. She was the light of her children’s lives and she will be so deeply missed.

She is preceded in death by her husband, Jack Evans; son, Robert Evans; son, Brian Evans; son, Vernon Evans; her mother, Mae Muhm; her father, Wayne Muhm; brothers, Eugene, Bill, James, Tom, and Wayne; sisters, Dorothy and Delores. She has one remaining sister that she is survived by, Shirley Boman of Hot Springs.