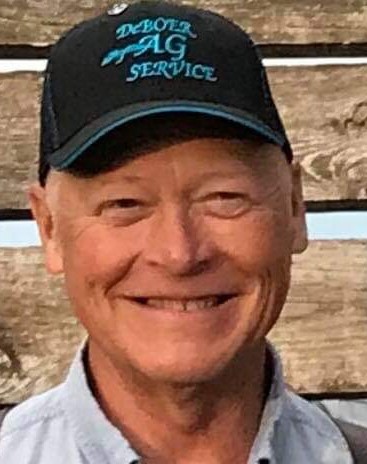 Craig Alan DeBoer, 65, passed away September 16, 2021, at his home in Oral, S.D. Craig was born March 23, 1956, in Hot Springs, S.D., to Don and Joyce DeBoer. The youngest of 3 children, he learned to work hard at an early age, on the family irrigated farm, raising crops and livestock. Growing up he enjoyed hunting, fishing and tinkering with old motors.  His family enjoyed singing on Sundays at church and formed a group, calling themselves “The Singing Deboer’s” while his mom played the piano. Craig attended country school in Oral through the eighth grade and went on to graduate from Hot Springs High School.

On February 27, 1976, Craig married the love of his life, Laura Muhm. After a year working for his father, they moved with their daughter, Kimberly, to The Dalles, Oregon, where he was employed as a diesel mechanic. After a couple of years, he was offered a job in American Falls, Idaho, at another tractor dealership, working as a mechanic. At this time a son, Keith, was born.

The desire to move closer to family brought them back to Oral where he worked at Orfeco, as a truck mechanic,  also spraying and fertilizing cropland in the surrounding Oral area. It was at this time another son, Kevin, was born. After Orfeco went out of business, Craig worked at a repair shop in Smithwick. A short time later he met Rick Johnson and went to work for Johnson’s Rancher’s Supply, spraying crop fertilizers and chemicals at Oral. After working for Rick for 14 years, Craig and Laura were fortunate to purchase the fertilizer/chemical business and farm from Rick, in May of 2000.

In June of 2018, Craig was diagnosed with pancreatic cancer. After an unsuccessful attempt to remove the tumor at the Mayo Hospital in Rochester, Minnesota, he underwent chemo treatments twice a month at the Vucurevich Cancer Center Institute in Rapid City. Through many hours of pain, he never lost his sense of humor and hope. His determination and strong positive attitude helped push him to continue working and helping his customers and neighbors, up until shortly before his death.

Craig will be remembered for his sense of humor, his positive attitude, inner strength, work ethic, musical ability and his love of people. He will be greatly missed by those who knew and loved him.

A Celebration of Craig’s Life will be held at 9:00 a.m., Tuesday, September 21, 2021, at the Mueller Center Theatre in Hot Springs, with Reverend Dr. J. Edwin Coates officiating.

Committal services will follow at Fairview Cemetery in Oral.