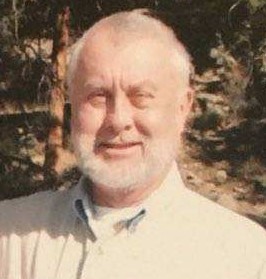 Raymond was born April 2, 1942, in St. Charles, Mo., to Harold C. Palmer and Margaret C. Shaberg. He had one older sister, Betty Palmer Suttor and 2 brothers, Rodney & Gerald Palmer. They moved from St. Charles to Los Angeles in 1943, as his dad worked for the railroad. Margaret used to take the kids on the Southern Pacific train to Missouri to visit Ray’s sister, Betty & her husband, Kenny. When Raymond was 10 years old, he traveled on the troop trains alone. His dad would place him on the train in Los Angeles, giving him a $1 bill, to give to the gentleman with the red cap on in Kansas City, so he could transfer trains. Ray loved visiting with the military guys as he made his trip.

Ray graduated from Eagle Rock High School in Los Angeles, Cali. in 1960. He worked for Metropolitan Life Insurance Company. He was a salesman for Armor Dial, he delivered fruits and vegetables for his brother-in-law in Missouri, he was employed by Continental Airlines in the early 1980s where he met Chachi, and went to work for KLM Royal Dutch Airlines for 25 years. He often traveled with the horses as they were shipped by KLM across the world. He consulted for U.S. Customs in Los Angeles. Ray and Chachi moved to and lived in Burnsville, Minn., from 1991-2009, working still with KLM, until Ray was forced into early retirement from KLM on 9/11/2001. He worked for Home Depot for 7 years while remaining in Minnesota. After moving to South Dakota in May of 2009, Ray worked for Weed and Pest Control for the County of Fall River for 8 years.

Ray loved to volunteer. He belonged to many organizations over the years. He was president of the Cargo Association for five years, Save the VA Executive Committee, Sons of the American Legion, Honorary Member of the Legion Riders, Board Member for Southern Hills Community Recreation Initiative for about 3 years, County Commissioners in Fall River County, Honor Guard for American Legion, volunteered for Fall River Hot Air Balloon Festival and many more.

Ray was known for his height of 6’6” which got him his nickname “The Gentle Giant”, and he had a good sense of humor. He loved corney jokes, which got him a second nickname as the “King of Corn”.  His hobbies included master gardening, golf, playing dominos and volunteering.

He is survived by his wife of 31 years, Chachi; his first spouse, MaryAnn (Rose) Musaccio; his 2 children, Jim and Genine; his grandchildren, Scott, Andie, Paul and Jon Palmer; his step-children, Gary Bank, Shannell McMillan, Kelly (Oliphant) DiBernardo and Robert Oliphant.

Celebration of Life Services, which were previously scheduled for Saturday, September 18, 2021, have been canceled due to other extenuating circumstances but may be held at a later date.

Arrangements for cremation have been made through Chamberlain McColley’s Funeral Home of Hot Springs.

In lieu of flowers, the friends of Ray and Chachi ask you to consider making a contribution to assist with Ray’s medical bills.