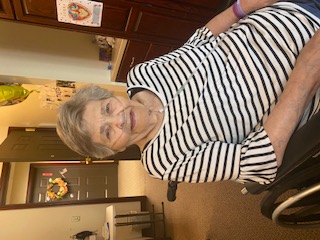 Donna was preceded in death by her parents, George and Randie French, and half brother, Allen French.

Donna worked for over 30 years in the VA Medical Center Hospital in Hot Springs taking care of veterans as a nurse’s aide. The great loves of her life were her children, grandchildren and great-grandchildren. She loved to sew stuffed dolls for them, crochet them Afghans, and read them bedtime stories. There was nothing better than curling up on Grandma Donna’s lap and having her read you a story. Besides her kids, she loved serving her church, Saint Anthony’s Of Padua Catholic Church of Hot Springs and helping the Catholic priests that led the church. She also had a lifelong love of Hot Springs High School athletics. Donna never stopped serving and honoring United States veterans and active-duty service people. She dearly loved the town of Hot Springs, its history, its businesses, its buildings, the Miss South Dakota pageant, everything that made the town unique. Her hobbies included gardening, crocheting, jigsaw puzzles, and sewing. Most of all she loved people, making new friends, catching up with old friends, visiting with anyone. She didn’t care whether you’re a senator or the man living on the street, she’d talk to you. She was an unstoppable force when it came to getting to know people. Donna’s greatest possessions were an inquisitive mind, a warm heart, a quick smile, a hearty laugh and a desire for companionship added up to Donna being able to meet you and in 10 minutes becoming your lifelong friend. She traveled the world to visit with Kathy, Steve, Juanita, Randy, Carlos, Julie and their children. She’s traveled to Korea, Hawaii, California, Texas, Colorado, Oregon, Washington DC, and innumerable trips to Omaha, Yankton, and Sioux Falls. Every one of these trips, especially those on a plane which involve the seat next to a stranger, soon turned into a seat next to a new lifelong friend. You didn’t have to be trapped on an airliner to be taken in by Donna’s charm, even just casual meetings at a function far far from your home turned new acquaintances into friends. Different ages didn’t put up any barriers, she could be friends with a five year old, a twenty year old, or a 90 year old. She just loved people and people loved Donna. Her other great skill was gardening. She had the most magical Green Thumb ever. She turned her yard on 6th Street into a beautiful flower garden. Flowers springing up next to the street, next to the sidewalk, next to and on the porch wherever. Donna could get flowers to grow out of the street pavement if she tried. She not only has the magic touch with seeds, but if  you gave her an old dying plant, she’d quickly nurse a clipping into a full  potted plant.

Donna did not master all the home keeping skills, the cooking skill always eluded her. She could talk a good game of being interested in recipes, ingredients, and ask you how you prepare the dish, but she was never going to make the recipe. Enjoying Donna’s company, you would soon be making it for her and wondering why you didn’t invite her over more often. Her sincere charm and interest in how you were doing, made everybody want to sit down and eat lunch with her. That was the magic of Donna.

A memorial has been established in Donna’s name, donations may be sent to: Catholic Daughters of America, 538 University Ave., PO Box 969, Hot Springs, SD 57747.