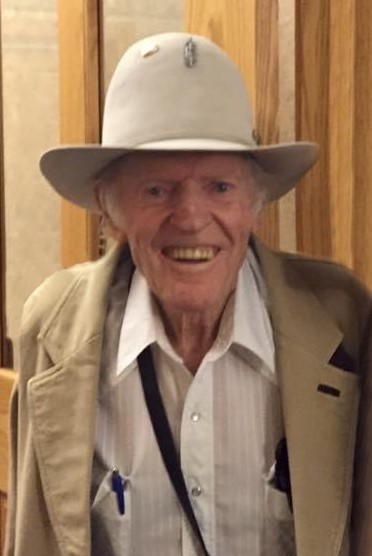 Arlice Junior ‘AJ’ Williams was born November 7, 1923, at Mountainair, New Mexico, to Adney Jason and Mary Pearl (Payne) Williams, the first of three boys born to them. Several Williams had migrated from west Texas and Oklahoma to the fertile high desert valley of the Manzano Mountains in New Mexico. A new town had sprung up in 1902, and the 40,000 acre valley became the “Pinto Bean Capitol of the World”. Thus, 20 years into AJ’s life he found himself on the China-Burma-India border eating pinto beans which were a major part of Army rations to soldiers in World War II.

In the early years of AJ’s life his dad, Adney, walked by a Methodist Church on a Wednesday night, and from the shadows outside heard the gospel of Jesus proclaimed. He accepted God’s call to the ministry and pinto bean farming lost a family. So AJ went from being the son of a farmer to being a preacher’s kid. In those years they moved pastors about every 3 years or so and that meant moving from town to town and changing schools. The Dust Bowl or Great Depression hit when AJ was 7 or 8 years old.  One time someone put a $10 bill in the offering plate on Sunday by mistake. Before it could be deposited the man came and reclaimed $9 of that money. That really shortened the grocery list that week!

In the town of Littlefield, Texas, where his dad was pastoring, there was a pretty young girl, Reba Walker, that had just finished high school. AJ met and fell in love with her and they were married on January 9, 1942. The two headed to California for jobs.

Their first born, Arlice Waymon, was born April 6, 1944, and soon after AJ was headed to boot camp and then shipped out to Calcuta, India, enroute to his Ledo Road Camp. When the war was over 5,000 troops sailed home on the “General Greeley Ship” around Australia to avoid mines planted by the enemy and finally under the Golden Gate Bridge at San Francisco to Mare Island and discharged.

AJ and Reba worked for Douglas Aircraft and Firestone Tire and Rubber until 1947, then headed back to New Mexico and Texas. Shortly thereafter, AJ went with his father-in-law to South Dakota which began their transition to remain in the North Country for the remained of his life. During these transitional years their daughter, Mary Carolyn was born August 29, 1949, in Littlefield, Texas. The Walkers and Williams first bought and rented land near Onida, S.D., with AJ and Reba eventually settling on a farm they purchased near Blunt, S.D. and remained there to retirement when they moved to Blunt. In 1959, their third child, Timmie Joe, was born while they were spending the winter in Albuquerque, New Mexico, that year.

West Texas friends, Clyde and Nita Colson, joined them in S.D., and raised their children Colleen, Carl and Clayton. Follow the cowboy-boot fence line in Hughes County, and you will arrive at the original Williams farm, which is now part of Colson Farms. A friendship that started over 70 years ago has become a family legacy that thrives today. In addition to farming, AJ ran cattle west of Onida. For forty years, he ranched on what is now his grandson’s ranch on Sully Lake. Like his grand dad, grandson, Ajaye Williams proudly continues to lead a cowboy’s life.

In the year 2000, AJ, Reba and their dog, Coley, moved to Hot Springs, S.D. to establish residence in the South Dakota State Veterans Home. Reba passed away in 2007. AJ continued to live in the home for several years in a single apartment. Eventually he married Margie LaPlante. She had been raised on a ranch at LaPlant, S.D., and is now a veteran’s widow twice over. She will be 99 years old on December 1 and is a lovely lady. In AJ’s later years he found peace with God and his greatest desire was that all precious family and friends would prepare themselves to meet him in Heaven with Jesus.

AJ passed away on November 12, 2020, in his home, the State Veterans Home in Hot Springs.

He was preceded in death by his parents, Adney and Pearl Williams; wife, Reba; brother, Arvin Dennis who died as an infant; brother, Newell and Newell’s wife, Jean.

Visitation was held at 10:00 a.m. on Wednesday, November 18, 2020, at Chamberlain McColley’s Funeral Home in Hot Springs.

The family will plan a memorial service, to be held at a later date, in Blunt, S.D.