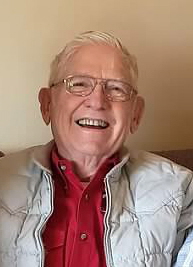 Bill was born April 6, 1937 in Valentine to Loren and Esther (Coleman) Drinkwalter. He grew up on the family ranch south of Kilgore and graduated from Valentine High School in 1954. Bill joined the United States Navy and served in Japan and Okinawa for four years during peacetime. He returned to ranching and worked for his older brother Jim where he met Gail Isom. They were married December 18, 1960. The couple moved back to the ranch on the Niobrara River, then to Kilgore, and later to Thedford. Two daughters, Janet and Karen, were born during this time. Bill and Gail owned the Brandin Iron store in Thedford for many years. Bill also traveled as a sales rep for a variety of companies for several years. He was in his element when he could be out on the road visiting with people. In 1999, Bill and Gail moved to Hot Springs, S.D.

Visitation will be held from 5 p.m. to 8 p.m., Tuesday, July 28, 2020 at Sandoz Chapel of the Pines in Valentine. Private family services will be held but will be livestreamed through the Valentine Presbyterian Church Facebook page at 10:00 am on Wednesday, July 29, 2020. Public interment will be at Mount Hope Cemetery at 11:00 am. If attending, please follow all social distancing and mask recommendations.

The family will gather at Valentine City Park afterwards for an opportunity to talk with so many of Bill’s friends. Light refreshments will be provided.

In lieu of flowers, please make contributions to the Valentine Senior Center or Centennial Hall in Bill’s name.

Online obituary and guest book may be viewed at www.www.sandozfuneralhome.com.