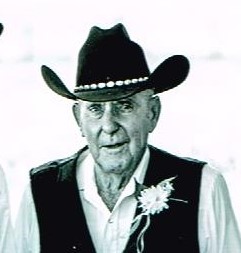 Raymond Edward Semroska, 89, of Harrison, Nebraska, passed away on July 9, 2020 in Lusk, Wyoming.

Funeral services will be held at Pier Funeral Home in Lusk on Friday July 17, 2020 at 10 a.m., with Reverend James Rockhill officiating. Lunch will be served at the Harrison VFD with burial to follow at Montrose Cemetery in Harrison.

Ray was born at home to Richard and Barbara (Serres) Semroska on May 7, 1931. Ray attended school until his father passed away in 1946. Ray’s brothers were in the service, so Ray became the oldest male at home, a role he took seriously. You would see Ray up and ready to go by 4 a.m. saying “you can’t get anything done if you don’t get started!” Beating the sun up was part of the fond memories of trailing cattle to South Dakota in the spring and back home in the fall. In 1962, Ray signed a contract to purchase the ranch in South Dakota from his mother. This purchase included the Vetter Place purchased in 1946 and the Hoar Place purchased in 1949. The Hoar place was sold in 2003 and Ray purchased land closer to Harrison, Neb.

In 1970 Ray married Bea (Rising) Grimm and four stepbrothers were welcomed to the family, Dal, Calvin, Curt, and Clay.

In 1989 Ray and Doreen (Smith) Bunge married welcoming 2 stepbrothers to the family, Alan and Jay Dee.

Purchasing his first horse, a thoroughbred stallion, from the Fort Robinson cavalry was all it took for Ray to get involved in the horse business. By 1959 Ray had worked his way into the Quarter Horse industry.

Ray was involved in the American Quarter Horse Association and was recognized for his achievements.  On November 13, 2016, Ray was honored with the 50-year breeder award.

Ray served on both the Indian Creek and Sugar Loaf grazing associations for 20 years.

Memorials may be given to Redeemer Evangelical Lutheran Church in Harrison and the Montrose Church.

The family of Ray Semroska would like to extend our sincere thanks to Niobrara Community Hospital for the care they provided and ladies of the Lutheran Church for providing drinks and desserts.

Arrangements are made by Pier Funeral Home.