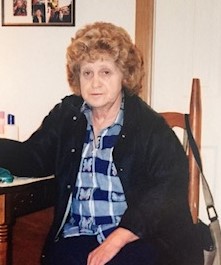 Shirley was born in Manville, Wyo. on June 5, 1940. She was the fifth child of six of Calvin Elias Dillon and Rinnie Bell (Brewer) Dillon. She spent her toddler years in Manville and then the family moved to Springview, Neb. sometime near her fifth year.

The family then resettled in Ainsworth, Neb. She graduated Ainsworth High in 1958 and lived on her own for a couple of years until she married Larry William Langer in 1960. During this union three children arrived: Renea, Bill, and Greg Langer.

A move from Cairo, Neb. to Custer, SD in 1974 brought them all to the Black Hills. Near this time, Shirley began her career as a nurses aid at the State Hospital on the outskirts of Custer. She developed a love of helping others and began her schooling to be a CNA. She moved to Lusk, Wyo. in the 1980’s and sought this type of work for the next 30 some years.

She was an avid crochetier and supplied her family with many blankets, doll clothes, and a variety of other fun things. Another of her hobbies was that of “Avon Lady” and meeting new people. Her grandchildren all enjoyed the Christmas box from Grandma Shirley, which held all sorts of special Avon gifts!

In 2018, she moved to Buffalo Gap to be near her family. She loved the Black Hills area and enjoyed the people and scenery. She also loved music, animals, and reading the Bible.

She leaves behind her three children, Helena Renea (Jeff) Hill, of Dillon, Colo.; William Kelly (Stacy) Langer of Rapid City; and Lawrence Gregory Langer of Buffalo Gap; many grandchildren and great-grandchildren, and nieces and nephews.

Due to the Coronavirus restrictions, a private committal service will be held at Buffalo Gap Cemetery in Buffalo Gap, S.D.