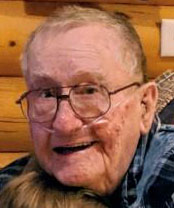 Donald Ray Brown and his twin sister Dorothy, were born to Harold and Edith Brown on June 26, 1926, at Mariaville, Neb.

Donald grew up and worked in the Mariaville area until entering the U.S. Navy during WWII. He served from March of 1944 until his honorable discharge in May of 1946. After returning from the military he worked on ranches in North Dakota and Cody,Neb., before returning to the home place north of Newport, Neb.

Donald and Ardis Jones were married in Long Pine, Neb. on March 15, 1951. They had two daughters, Connie and Donna. After leaving the home place Donald worked on various ranches in Rock and Brown county. After retiring from ranching Donald started working construction. Donald and Ardis moved into Ainsworth, Neb. in 1963 living there until 1972 when Donald’s heavy equipment jobs took him all across the US. They retired in 1991 in Hot Springs, S,D,, where they built a log home south of Hot Springs. Donald lived there until June of 2019 when he entered the Seven Sisters Living Center in Hot Springs.

Preceding him in death were his wife, Ardis; parents, Harold and Edith; in-laws, Clarence and May Jones; sister, Dorothy and brother, Lloyd.

Committal services will be held at 1:00 p.m., on Monday, February 10, 2020, at the Black Hills National Cemetery near Sturgis with Pastor Dan Barcus officiating.