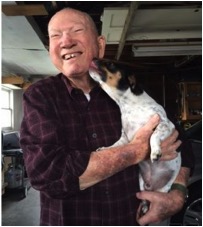 Our family is saddened by the sudden death of our husband/dad/family/friend. John had a sudden cardiac event in his Fortuna California home that he did not survive. He was 85.

John always had a handshake and a laugh for everyone he ever met. He never met a person he didn’t like.

John was the 13th of 16 children born to Bethel and Fred Rasmussen at home on the prairie near Oral, South Dakota. He lived in those harsh South Dakota winters and told many a story of blizzards and ropes strung from the house to the outhouse, keeping everyone from getting lost in the snowstorms just to go to the bathroom. His young life was one of bare minimums and hard work.

He joined the Marines in 1952 when he was 18. He was stationed in Japan for a time. Then he moved to Fortuna where his sister, Alice Lake (Rasmussen) lived. While making his living at the Pacific Lumber Company, he met his beautiful bride to be, Joan Whitelock-Lake. They were married on September 14, 1957.

John welcomed his 4 year old stepson, Mike Lake into his life at that time. Four years later their son, Ken Rasmussen was born. Then his daughter, Nancy Carswell (Rasmussen) wrapped her dad around her little finger three years later.

He worked at just about every lumber mill in Humboldt County including the Pacific Lumber Company, Enevoldson Lumber Company (where Riverwalk, Fortuna is now) and Eel River Sawmills. He was a skilled saw filer as well as knowing every skill needed to work a sawmill.

John loved fishing. He loved to watch sports, especially baseball. He loved to tow all the kids skiing at Ruth Lake. His smile was huge when Mike was at the end of the ski rope and Mike said, “hit it!” He loved his grandkids and granddogs.

John is survived by his wife of 62 years, Joan; his three kids and spouses, Mike and Debra Lake, Ken and Cindy Rasmussen and Nancy and Roy Carswell. He is also survived by his sister, Mary Flyte and numerous nieces, nephews and cousins.

In lieu of flowers, John’s wishes are for memorial donations to be given to Veterans/American Legion Hall, Fortuna Branch, or to the charity of your choice.