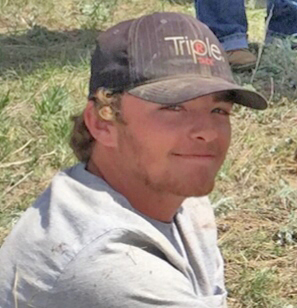 And Clay loved where he lived! A remarkable young man left us too early, but his life on earth was very full. Full of love from all who knew him. Rich with friends near and far, young and old.

Clayton Robert Schnose, 17, of Oelrichs, passed very peacefully July 19, 2019, while a patient at St. Mary’s Hospital in Rochester, Minn. He was there fighting a rare form a neurological disease labeled as auto immune encephalitis.

Clay was born December 27, 2001, to Bert and Kim Schnose. Even that event happened before it was supposed to! He was such a handsome addition to the family! He grew up on the family ranch west of Oelrichs, working side by side with his dad and big sister Mykelsi. When his dad passed away in 2013, many friends and neighbors stepped up to help with the ranching but there was little left to teach Clay, his dad had taught him so much in a short amount of time! His Uncle Tom was able to make the most of the last few years working with Clay, teaching him more Ranching 101 and why it’s important to go to college so he wasn’t stuck in the pipeline ditches. The only problem was, he loved all that stuff! Clay didn’t know what he would take in college, he just knew it would be quick so he could come back to the ranch!

“Master Schnose” had several fine qualities, but the most commented on was his excellent work ethic, his willingness to pitch in and help regardless of the job, and how much he loved to argue! Several will attest to that! Clay attended high school at Hot Springs and was involved in FFA, South Dakota High School Rodeo, 4-H, Little Britches Rodeo, and the occasional Friday night poker night with the Oelrichs boys! He was also fortunate to inherit his dad’s “spot” on the annual fishing trip to the river in Pierre and hanging out with the “Hunters from Minnesota” during deer season in November. Clay’s life may have been cut short, but he lived with few regrets! I imagine if he had one, it’s that he never made it to the National High School Rodeo Finals, nor did he get a taste of the college rodeo scene his sister shared stories of. Roping was his true passion, and it didn’t matter if it was team roping or calf roping. He never complained about what he didn’t have, just knew he had to work harder for the next time!

He was greeted with open arms by his dad, Bert Schnose; his grandma, Mary Schnose and Carolyn Schnose; and his grandpa, David McFarland.

We can only imagine the scene that took place, but it’s guaranteed there’s a smile on his face! Happy Roping bud!

A memorial has been established in Clay’s name.