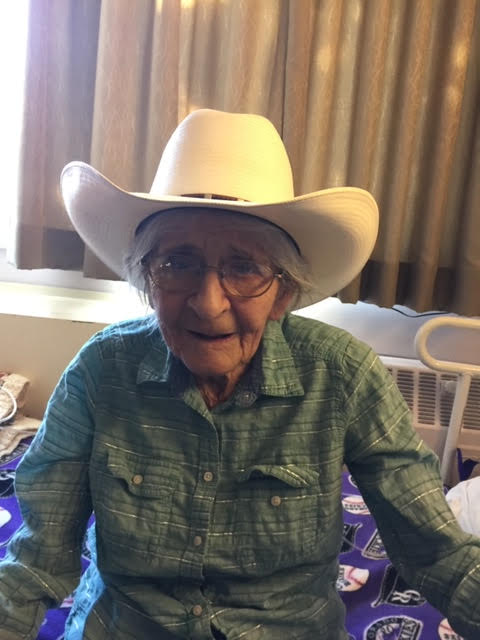 Phyllis was born on March 11, 1924, to John and Nevetta Hill in Sturgis and grew up in the Black Hills with a love for the Hills and the country life. She met and married John (Mike) Michaels on June 27, 1948, at the Methodist Church in Edgemont.  During the 40’s she worked at the Black Hills Ordnance Depot and was known by the nickname ‘Pete’ while driving semi-trucks transporting both people and ordnances, also working at the Edgemont Hospital (which was owned by her mother). While raising her three children she worked at the hardware stores and at the Jack and Jill grocery store.

Phyllis was an active member in the Congregational Church at Edgemont. She supported her daughter in 4-H and was a Den Mother for her sons in Cub Scouts.

Phyllis spent her free time creating through crocheting, knitting, embroidery and sewing. Bowling was a favorite past time of hers as well as playing cards, pool, golf and walking.  She was an avid Broncos and Rockies sports fan.

Phyllis was down to earth and her country values were displayed through her kindness to others by always putting other’s needs before her own. She displayed strength through a hard life never uttering a single complaint nor did she ever speak an ill word of anyone. Phyllis embraced life to its fullest and had a joy and zest for life that will be deeply missed by her children.

She is preceded in death by her husband, John (Mike) Michaels; parents, John and Nevetta (Hill) O’Connor; and her three sisters, Beverly Stearns, Shirley Lewin and Janice Stratton.

A celebration of life will be held in July 2020, at Canyon Lake in Rapid City, with committal services held at Black Hills National Cemetery near Sturgis.

A memorial has been established in Phyllis’ name to benefit the Hospice of the Black Hills or Avantara Mt. View Nursing Home in Rapid City.