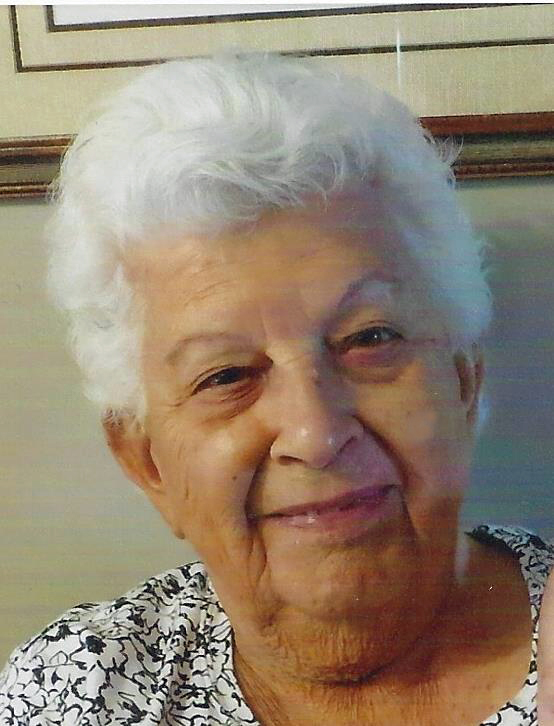 Evelyn Marie Boortz was born September 5, 1929 to William and Mary (Brunsch) Kahler in Tripp County South Dakota. She was the youngest of five children. Evelyn was baptized at St. Paul’s Lutheran Church south of Colome on December 8, 1929 and was confirmed at St. Paul’s on August 31, 1942.

She graduated from the 8th grade of the Progressive School and attended two years at Colome High School. On December 26, 1949 she married Ivan Boortz at St. John’s Lutheran Church in Gregory. Ivan and Evelyn bought a farm south of Gregory. Jackie Lynne was born Feb. 1953 and Patty Jo was born April 1955. They later moved to Sioux City, Iowa where Ivan attended Barber College. From there they moved to Rapid City. After a short stay they moved to Winner in 1958. Michael Ivan was born in June of 1959. Evelyn worked 13 years at the Westside Grocery Store and 12 years at the Rexall Drugstore. She then worked as a Unit Secretary at the Winner Baptist Hospital for a few years.

Evelyn was active at Christ Lutheran Church helping with Sunday School, VBS, and LWML. She was also involved with the VFW of which she was a lifetime member and held different offices in the Auxiliary including president and secretary.  In 1981-82 she was the state VFW Auxiliary president and later was the National Council Woman for SD, ND, and WY. After Ivan passed in 2005, she moved to Edgemont to be closer to Jackie and Mike who also lived there at the time. She loved her children and their spouses and the grandchildren and their spouses and her great grandchildren along with her many nieces and nephews.  Evelyn volunteered for different groups in Winner and after moving to Edgemont she became involved with the American Legion Auxiliary and was the chaplain for the group.  She was very patriotic and loved and supported our nation’s veterans.

Evelyn and Ivan loved to travel and most of all to go fishing especially to the Missouri River to fish for walleyes.  She made a great pheasant dish and was well known for her homemade ice cream, waffles, whole wheat buns and banana bread. She was diagnosed shortly after her 80th birthday with a cancerous tumor on her vocal chords.  After radiation treatments she was cancer free until Feb. 2013 when she was diagnosed with uterine cancer.  After the hysterectomy she was again cancer free until earlier this year.  She was in a lot of pain and was looking forward to the day when the Lord would come and take her by the hand and lead her home.  The last thing she said to her daughter Jackie on Friday June 21 was, “If I am not here tomorrow, tell everyone I love them and God bless them.”

Evelyn’s children would like to thank family, friends, and Pastor Gary Jacobsen for their prayers, visits, phone calls, and cards and the doctors and nurses for their loving care. In lieu of flowers, memorials may be given to Main Street Living or the Edgemont Ambulance Service.

Evelyn was preceded in death by her husband of 55 years, Ivan Boortz, her parents, and Ivan’s parents, her sister and three brothers, brothers-in-law and sisters-in-laws, 5 nephews and 2 nieces.

Grateful for having shared her life are her son Michael and his wife Donna Roebuck of Hermosa; daughters, Jackie and husband Gary Martin of Edgemont; and Patty and husband Dan Henschen of Fremont, Neb.; and their children Lydia and husband Quinn Tirrel and their children Elijah, Evelyn, and Emelia of Omaha; Jacob and wife Sara Henschen and son Benjamin of Valparaiso, Ind.; and Joel and wife Jessica of New Orleans, La.; and many wonderful nieces, nephews, and cousins.

Arrangements were placed in the care of Chamberlain McColley’s Funeral Home of Custer.