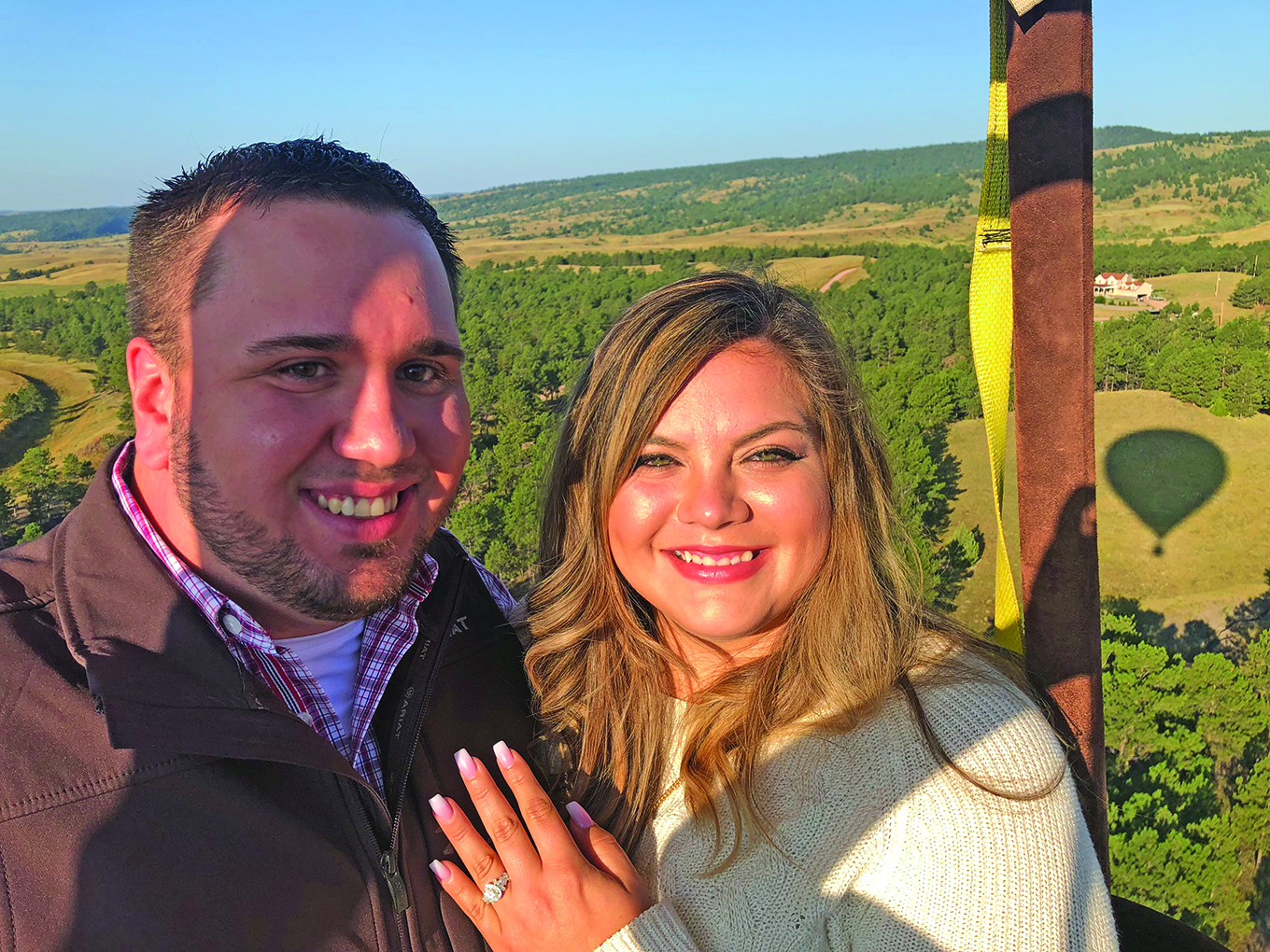 EDGEMONT – In a romantic gesture straight out of the movies, Edgemont residents Anette Wieler and William Maxell last month climbed aboard a bright and colorful hot air balloon in the early morning hours on Wednesday, August 29. Unbeknownst to Wieler, this romantic gesture would turn out to be one of the most memorable mornings of her life.

Maxell coordinated with Western Horizons Hot Air Balloons out of Hot Springs and spoke in length with owner Petra Wilson while he planned the elaborate date for nearly two months. Maxell was planning to propose to Wieler and just need some final touches to make the moment monumental for the both of them.

Once the couple was casually cruising high above the treetops, Maxell pointed down to the ground when a truck had just zoomed beneath them in the open field. As Maxell pointed down to the truck, two people quickly emerged from the truck and ran over to unravel a large, brightly colored banner that read, “will you marry me?” Maxell was already down on one knee presenting a diamond ring when Wieler turned to look at him and after a few sweet words she happily exclaimed, “yes!”

The couple continued their flight and let the wind carry them all the way from the Den at Angostura Dam to their final landing place near Buffalo Gap. During their ride, Wilson even tried to cruise along the treetops and grab a pine cone souvenir for the couple. Although her efforts didn’t produce any souvenirs, Maxell and Wieler both thought the effort was a really cool experience.

With the balloon chasers waiting below to bring the balloon to safety, the couple took a few moments to recap their adventure and took a few candid photos to remember the day by. Once they landed on the ground, the couple was presented with post-flight refreshments to seal the experience.

While one of the perks offered to all passengers aboard Western Horizons flights is a post-flight picnic table setup with refreshments to enjoy, Western Horizons made the effort to customize Wieler’s experience. To go the extra mile, Wilson coordinated with Maxell and drove all the way up to Rapid City just to retrieve Wieler’s favorite bottle of Moscato, Castello Del Poggio Moscato from Italy. “Petra went above and beyond to make her day unforgettable,” stated Maxell. The couple was also presented with muffins, cheese and crackers to help celebrate the flight and proposal.

With a permanent grin on her face and excitement pouring out of her, Wieler commented, “it was the most romantic experience of my life. William did such an amazing job.”

Wieler, raised in Orlando, Fla., met Maxell in Edgemont while she was in town for a couple months visiting her father, who had made a temporary move to Edgemont. Maxell who is originally from Waldron, Ark., had been working for BNSF and was also new to Edgemont. After the couple met and started dating each other in 2015, they moved back to their respective hometowns and endured two years of long distance dating before the pair returned to Edgemont in 2018. Currently, Maxell continues working for BNSF and Wieler maintains an office in Edgemont when she isn’t traveling for her job.

With the shadow of their hot air balloon visible on the ground below them, Anette Wieler of Edgemont holds up the engagement ring presented to her by her now-fiance William Maxell while on a balloon flight with Petra Wilson of Western Horizons.