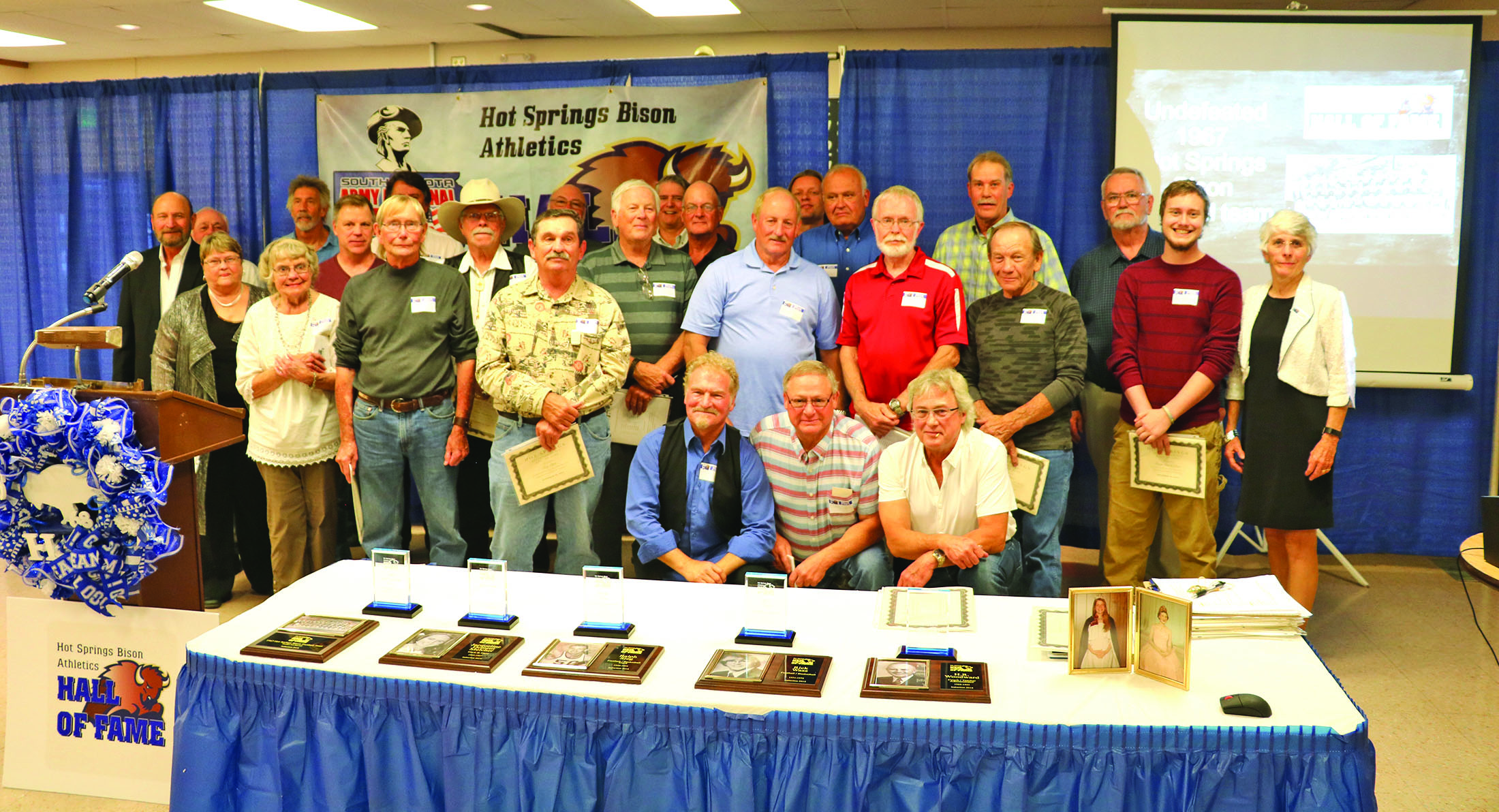 HOT SPRINGS – It was a special time in Hot Springs this past weekend as the HSHS Class of 1968 and 1978 held reunions, while the Hot Springs Bison Athletics Hall of Fame also hosted its third annual induction banquet in conjunction with the school’s annual homecoming festivities.

“It was a wonderful weekend remembering old times and making new memories,” said Joyce Farrell, who not only helped coordinate the Class of 1968 reunion but is also a member of the Hall of Fame committee which put on both an induction banquet at the American Legion and also a ‘reunion concert’ featuring The Shells of Time at the Mueller Civic Center.

Farrell said that over half of the 78 members of the Class of 1968 returned to Hot Springs to participate in the 50th class reunion activities. “With 18 classmates from our class who are already deceased, people recognize the value of each day,” she added.

“There were a lot of comments concerning former teachers, athletic teams, band trips, and plays,” Farrell said. “It was a great feeling to see folks visiting. Everyone seemed to recognize the specialness our class had, very diverse individuals but united as a class.”

Making the reunion weekend even more memorable for the attendees of all the events was The Shells of Time concert, Farrell said.

The band itself was formed in and around Hot Springs in the late 1960s, and after remaining a group through the early 1970s while touring the Midwest and Canada, would eventually be inducted into the South Dakota Rock & Roll Hall of Fame in 2015.

Three of its band members are Hot Springs High School alum – Mike English, Craig Katt and Rich Schuttler -- with two of them (English and Schuttler) also members of the 1967 undefeated Hot Springs Bison football team which was inducted into the Hot Springs Bison Athletics Hall of Fame banquet held just prior to the concert this past Saturday night.

“The concert being held in conjunction with the reunions and the Hall of Fame banquet was a great coordination of events, which made things very special for everyone,” Farrell said. “A lot of my and their classmates came back to hear them play.”

The 1967 Bison football team was one of five total inductees who were honored at banquet. Others included longtime school administrator and coach H.R. Woodward, along with athletes Ralph Sieg, Rick Wass and Jacqueline Dement Melcher.

Hall of Fame Committee Chair Quinten Hofer, who was one of the inaugural inductees into the school’s sports hall in 2015, said the weekend was a success overall as it honored elite individuals who performed at a high level, and in turn, made Hot Springs High School proud of them.

“Little did those Inductees know at the time what they were accomplishing in high school was going to show up years later,” Hofer said after the weekend had concluded. “Growing up in Hot Springs, the support in athletics by the community was amazing. That has not changed. I heard that same message Saturday night from the Inductees how the community arrives in full force at home and on the road.”

Getting the 1967 football team together for the banquet was an “interesting task,” Farrell said. “Thanks to the sleuthing talents of Bill Marks we were able to contact all but three team members.”

On a team of 36 members, Farrell added that seven of them are now deceased.

“This team was picked to finish at the bottom of the Black Hills Conference and ended up ranked 10th in the entire state,” Farrell said. “To see these gentlemen and see the excitement in their eyes as they saw former teammates whom they had not seen for 50 years was special and very rewarding, making all the work worth it.  I enjoyed visiting with team members, but most of all the opportunity to recognize some great athletes who were always outsized on the field but had a drive and determination to succeed and were well coached by coaches, including Charlie McGaw.”

Introducing inductee Jacqueline DeMent Melcher was her former coach Cheryl Huddleston, and accepting on her behalf was her sister Genny, due to Jacqueline expecting the birth of a child soon and unable to travel to Hot Springs from her home in North Carolina.

However, Jacqueline was able to join the festivities via live video chat through Facebook Messenger, where she thanked the committee for her induction and spoke about how special her time in Hot Springs was for her and her sister.

Due to moving around a lot when they were younger, the two sisters attended three different high schools in four years, but both graduating from Hot Springs in 1997. During her two years while competing for the Bison in both volleyball and track, Dement won three gold medals at the state meet her senior year (triple jump, 300m hurdles and 200-meter dash) and could have likely been in the running for a fourth gold medal had she not been called for a false start in the 100-meters.

During her live video call from North Carolina, she spoke of how she had been recently wearing her now near-see-through Black Hills Conference t-shirt from high school, when her husband remarked how she needed a new T-shirt. She said she refused to get rid of the T-shirt as it was a constant reminder of her special time in Hot Springs.

A few days after that discussion about the T-shirt, she was notified that she had been inducted into her alma-mater’s sports hall of fame.

Following up DeMent’s banquet induction was that of Rick Wass, who was key factor in the 1974 football team’s state championship season. He was introduced by his former coach Gary Glenn, who also served as the banquet’s emcee for the night.

During his speech, Wass thanked a number of people, including his former coaches Jim Tays, Coach Glenn, his teammates and his family.

Inductee Ralph Sieg was a four-sport standout of the mid-1950s in Hot Springs, including basketball, football, track and baseball. He was introduced by longtime friend Bill Coffield. In addition to playing sports himself, Sieg also coached sports in the area, including a short time in Smithwick before the school was closed in 1959. Several of the students whom he helped coach in Smithwick were in attendance at the induction banquet and stood during his speech to be recognized.

Sieg was a JV basketball coach in Hot Springs and coached the seniors of the Hall of Fame 1967 football team when they were freshmen and sophomores. He was also the driving force behind raising funds for the first wood floor in Case Auditorium.

The final inductee recognized at the banquet was the namesake of the school’s football stadium – Harry R. Woodward, who was served as an administrator, teacher and coach in Hot Springs beginning in 1916 until his death in 1955. Woodward was introduced at the banquet by Quinten Hofer and represented by nine members of his family from across the country, including grandchildren, great-grandchilden and great-great grandchildren.

“Presenting Harry R. Woodward and family was a big deal for me,” said Hofer following the banquet. “This iconic person meant so much to Hot Springs High School as a coach, educator and administrator for 40 years. One of the things that I learned preparing for my presentation was Hot Springs High School started organized football in 1910. Harry R. Woodward starting coaching Hot Springs in 1916. In 1917 Woodward’s team were State Champions. Great success in a short period of time.”

Hofer also said that the Woodward family who attended the weekend’s festivities were impressed with the banquet and community support. “It means a lot to them as they all wanted to be at the activities Friday evening and the Hall of Fame Banquet and Shells of Time concert,” he added.

During his ‘telling of Woodward’s story,’ Hofer spoke of his memories growing up in Hot Springs and hearing the name Woodward and leaning against the stone arch at the football field which bears his name, but not truly knowing of Woodward’s full impact on the community until doing the research and getting to know his family.

At the time of its construction, Hot Springs High School track and football stadium – which were both personally designed by Woodward himself – were considered one of the finest in the entire state and the first lit stadium in the Black Hills.

Woodward’s granddaughter Robin Woodward Robinson of Atlanta, Georgia, who eight years old when her “Grandpa Woody” passed away, accepted the honor on behalf of entire family, who reside mostly in the South.

“I’m thankful that you all still treasure the field as much as I do,” she said during his acceptance speech, which included her recollections of visiting the field as a young girl.

Proud to be a part of not only hosting events to recognize and entertain alumni, Hofer said he was also pleased with the additional benefits of helping out the community of Hot Springs as a whole.

“Another thing that made the past weekend great was that hotels were full, eating and drinking establishments were busy, gas was being purchased in Hot Springs,” Hofer said. “The Hall of Fame Banquet, two class reunions, a high school football game and homecoming weekend brought a lot of people back to Hot Springs and supported the local businesses.”

“As people left I heard a lot say it was the best reunion weekend ever and they hope to come back again,” added Farrell.

Surrounded by his teammates on Hot Springs High School’s 1967 undefeated football team, team captain Bill Case addresses the audience during this past weekend’s induction banquet of the Hot Springs Bison Athletics Hall of Fame. Case, who was an All-State offensive lineman for the 1967 team, accepted the award on behalf of his teammates. Some of those team members pictured with him in this photo include, from left, Casey Dunsmore, Gary Piper, Ivan Mehlhaff, Ben Kaiser and Dan Wilder.