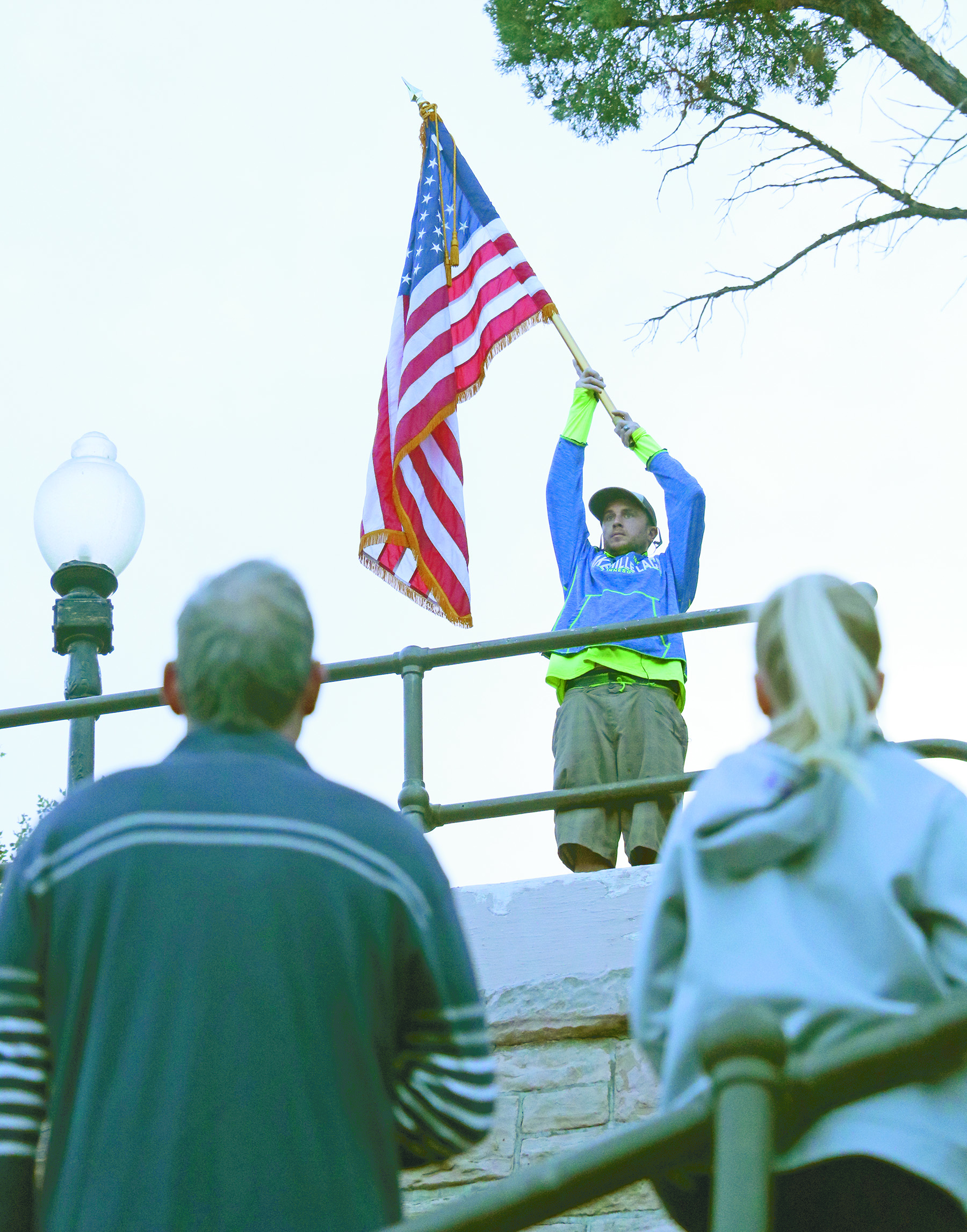 The event was inspired by the late Wade Burns, a local veteran born on Sept. 11, 1972, who came to Hot Springs for treatment at the VA Medical Center. In 2012, he marked his 40th birthday by climbing up and down the Battle Mountain Grand Staircase leading to the Hot Springs VAMC as many times as it took to reach the number of steps in one of the World Trade Center towers, which were destroyed by terrorists on Sept. 11, 2001.

In 2014, along with Burn’s friend Dusty Pence, the two discussed making the stair climb an annual event, in which the public was invited to attend. Burns however did not show up that morning to participate. It was later learned that he had died on or around that same day, an apparent victim of excessive self-medication.

Pence, who has continued to organize the climb every year since, which includes a climb of silence that commences at 6:46 a.m. when the first plane hit the WTC tower, said there were 54 registered climbers last Tuesday morning, compared to 66 the pervious year. However, those 54 climbers averaged 13 flights per person versus an average of nine flights per person last year.

This is important, Pence said, because ChallengeHS gets $1.00 from an anonymous donor for every flight climbed. Including the additional flights climbed by people carrying the U.S. Flag along with flights taken by the two dogs participating, a total of $784 was raised.

“The 9/11 Challenge is a personal challenge, not a competition, but there is often a little informal friendly competition,” said Pence. “Jeffrey VanMeter of Hot Springs heard that Isaiah Cox completed 60 flights last year, at age 12. VanMeter set a personal goal to break the record. Cox had already set a rash verbal pledge to go for 100 flights, but when the big day came he was ill and could not attend the climb. VanMeter not only broke the record, he advanced it to 86 flights!”

Luke Laducer of Hot Springs also broke Cox’s record with 61 flights. Pence said VanMeter offered to have a climb-off with Cox after VanMeter recovers from his 86 flights and Cox recovers fully from his illness. The donor has promised their $1.00 donation for that informal event also, should it take place.

In total, the staircase features 121 steps. To equal that of one World Trade Center, a participant needed to climb a total of 15 flights, or 2,115 steps. This year 22 people climbed 15 or more flights.

Higinio Maldonado of Houston, Texas, climbed several of his eight flights in full bunker gear. Little Miss Hot Springs Aubryanna Schmit was the youngest climber at age 8; she volunteered and also climbed, completing four flights in her crown and sash. Seventy-nine-year-old Sylvia Tannehill of Hot Springs may have been the  oldest climber.

Pence said Karen and Christopher Payne-Taylor of St. Petersburg, Fla., were guests at Red Rock River Resort and came out to see what all the commotion was about. They ended up climbing one flight so that they could be a part of the moment.

Another participant, Hal Glanville of Hot Springs, who several months ago went from walking precariously on two hand crutches to using a scooter, got up out of his scooter and climbed once up and down.