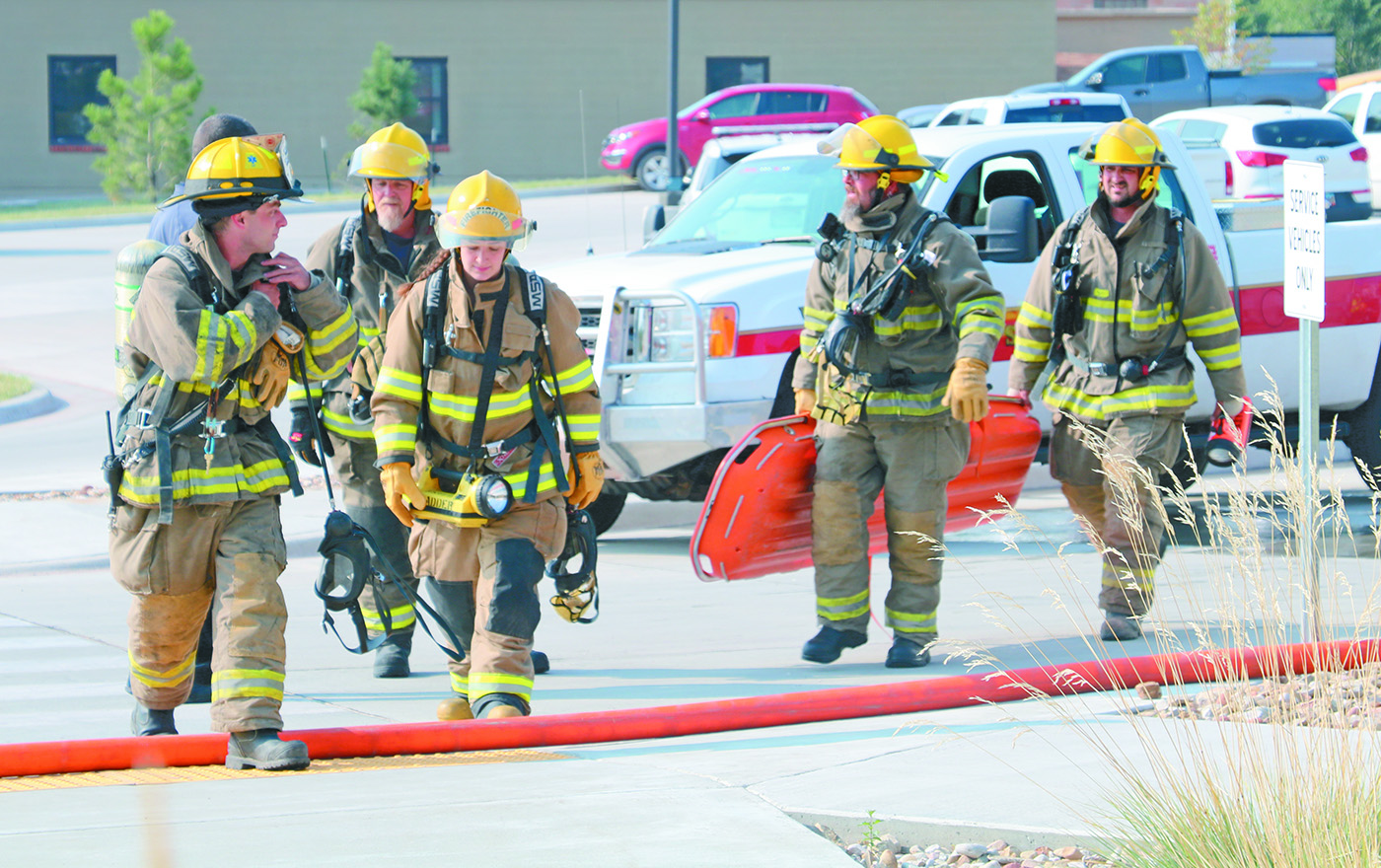 HOT SPRINGS – Alarms sounded and sirens blared across the community of Hot Springs last Wednesday morning, Aug. 22, as emergency personnel including police, fire and ambulance rushed to the South Dakota State Veterans Home where there was an explosion in the facility’s BioMass Plant which caused a fire in the adjacent resident quarters.

On the police scanner, it was reported that at least one person was dead with dozens of others suffering from burns and broken bones. But don’t worry.... it was only a test.

The drill held last week was organized and participated by a number of agencies as a way to test the local response in the event of a large-scale emergency in the town. Additionally, for the facilities involved, including the State Home and Fall River Hospital, it was also a required annual exercise to maintain eligibility for Medicare/Medicaid, according to Fall River Emergency Manager Frank Maynard.

Maynard was one of dozens of personnel on the scene last Wednesday at the State Home with handheld radios constantly in hand while listening and responding to other’s questions and demands at the other end of the electronic signal.

Hot Springs City Police, along with Fall River County Sheriff Deputies and the Hot Springs Volunteer Fire Department were the first to arrive on the scene shortly after 9 a.m. as law enforcement controlled traffic to allow the fire department’s large structure trucks to set up near the BioMass plant and beginning rolling out hoses and spraying water.

Other EMT fire personnel and other emergency health professionals then began entering the building to find victims, get to safety and begin treating them. As the fire department worked to put out the mock flames, the Hot Springs Ambulance Service set up a triage on the northwest side of the main State Home building, opposite the side of the supposed fire. There they began to treat victims – some of them State Home employees wearing makeup to appear injured, and some of them mannequins with visible gaping wounds on the heads – all of whom were wearing notecard lanyards around their necks to tell emergency responders their ailments.

Soon Life Flight arrived on the scene, and after circling overhead for a few minutes, landed on a wide ledge on the west end of the State Home grounds. As “victims” were loaded onto awaiting ambulances and transported to Fall River Hospital, one of the ambulances instead drove towards the helicopter and then loaded its passenger onto the helicopter.

After taking off and “pretending” to head towards Rapid City to the Regional Hospital, the chopper then circled back and instead landed back at Fall River Hospital where the victim – State Home resident/employee Daryl Custer – was taken off of the chopper and treated for his simulated injuries.

“Lots of things went really well. The response was good, the traffic control was good,” Maynard said, but added the one thing that can always be improved upon is communication.

Maynard said calls were made to many outside agencies to request assistance, which could have included sending personnel or simply providing a safe place for victims to go.

He said none of them sent anyone, but they were contacted and then confirmed arrival times for assistance or how many rooms they have available to take victims.

The simulated emergency lasted around an hour and a half, Maynard said, and was considered done at around 10:30 a.m., after Fall River Hospital declared the final victim sent to them had been treated.

State Home employees work together to extract a mannequin portraying an injury victim during an emergency drill held at the home last Wednesday morning.