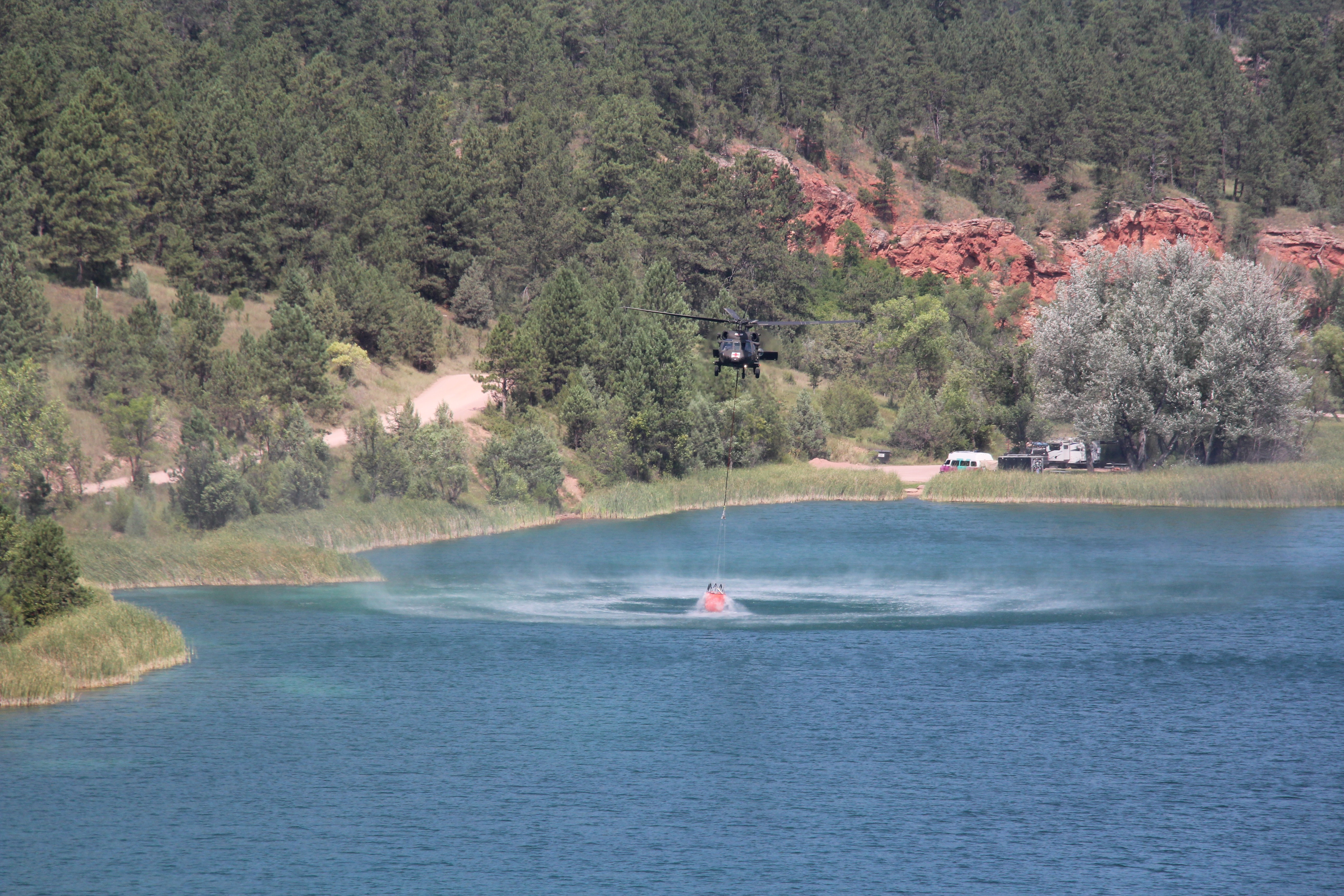 Based on a live briefing report at six a.m. this morning.

The fire threatening Hot Springs, known as the Vineyard Fire, has consumed about 130 acres as of six a.m. Sunday morning, and is still on the move. According to SD Wildland Fire Management Officer Steve Esser, “With fire conditions as they are the fire could easily threaten the town of Hot Springs. We want to make every effort to ensure this doesn’t happen.”

At this morning’s six a.m. briefing, Esser began the incident objectives process.  With hundreds of firefighters from 13 communities milling around the command center – the Mueller Center parking lot – Esser said the objectives of fighting this fire are:

Esser said to the group, “We’re worried about fire fighter and public safety, above all else. Beware when you are up there. Fuels are heavy and going to carry fire real well. It might look green but it’s pretty deceptive. Make sure we have LCES  (Lookout, Communication, Escape and Safety) in place for all operations on the fire.”

Jerome Harvey, Pennington County Fire Administrator, said, “Pennington County has been on the fire since the call yesterday and will remain in active structure protection. Our fire assistance team is happy to be here to support South Dakota wildland fire management, the city of Hot Springs and Fall River County Emergency Management.”

Incident commander Ray Bubb said, “Basically, obviously this fire is hung up right on the very edge of Hot Springs, so protecting on this division Alpha is going to be our main priority; that’s where we’re going to concentrate the hand crew work today, and try to get this buttoned up on this edge. There’s going to be some line construction and those guys will probably have to burn as they come down the hill and get things tied in. With the fire behavior we saw yesterday, it’s very easy if this thing blows up and goes, that we’re gonna be runnin’ and gunnin’, and it’s going to be a defensive mode on structures and we hope not to get there. So when we get a look at the other side, with Division Echo, as soon as we get air attack up this morning, our priority is to get as much retardant along the edge of that canyon as possible and try & hold that fire down and keep that flank held in.

On Bravo, they have a dozer lined up there trying to get closer and ahead of the fire as they do that we might be looking at a firing operation there as well.

As in the objectives, our priority is safety. It’s really hard to get a lot of resources right now because of other fires nationwide. “You guys are the most valuable resources we’ve got right now, and we can’t afford to get anybody hurt, we want everybody to go home from this thing.”

Structures are going to be at risk. Evaluate those structures. If you don’t think you can protect that structure safely…We had issues on Alabaugh with that. Structure before people. If it comes to a close call or somebody getting hurt versus losing a structure, the structure goes first. I want everybody to go home from this thing. We don’t have enough resources nationwide to back you up. We need you.”

Esser gave the local weather report, “This forecast is based on the time of 0600. Gusty winds low relative humidity, 15-20 percent range. Winds will gust 25-30 miles per hour, shifting to northeast Monday morning. Today will be sunny with a minimum relative humidity, chance of rain zero percent, with winds at 15-25, and smoke dispersal very good. “

Also on hand for the briefing were city councilman Bill Lukens and Mayor George Kotti. Lukens said, “The sense we saw this morning is the incident command structure is in place; all the key positions are in place. They have a good action plan, with the priority of protection of people and then the protection of structures. They’ve got their resources allocated to be able to stop this fire. We are really seeing the community pulling together. There’s real teamwork and commitment. They’ve got each other’s backs and they’ve got the city’s back right now. So it’s really good to see. I started chasing fire trucks since I was 16 years old. Things have changed so much. These guys have a plan, they’re not just running out there and throwing dirt and throwing water. They’re doing it right, with forethought and I think we can see that by the progress they made on a very fast moving fire yesterday. I hope to see good progress today.”

Kotti expressed his gratitude for all of the support, “I was very pleased with our police force for their response, getting the folks who needed to be evacuated notified and traffic control. They did a great job. Our Mueller Center folks responded quickly to get that open as quickly as possible. We’ve got a good team in Hot Springs who responded very well. I’m amazed as I look around seeing all the various fire departments come to our aid. This could be a very dangerous situation and we pray that everyone will stay safe on the line and get this fire out as quickly as possible and save Hot Springs.”

As with many disasters, the American Red Cross is on hand to offer assistance to evacuees. Sharon Mode, from Custer said she has three clients thus far. “Especially in this area, everybody takes care of everyone else. The three clients have pets and decided to stay in their vehicles with their pets. Mode added, “The Mueller Civic Center is an awesome facility. I’ve been doing this for 29 years and if every place had a facility like this, I’d be in Heaven.” For more shelter information, go to the Mueller Civic Center.

Incident commander Ray Bubb said the cause of the fire is currently under investigation.

Further information will be shared as it is updated.