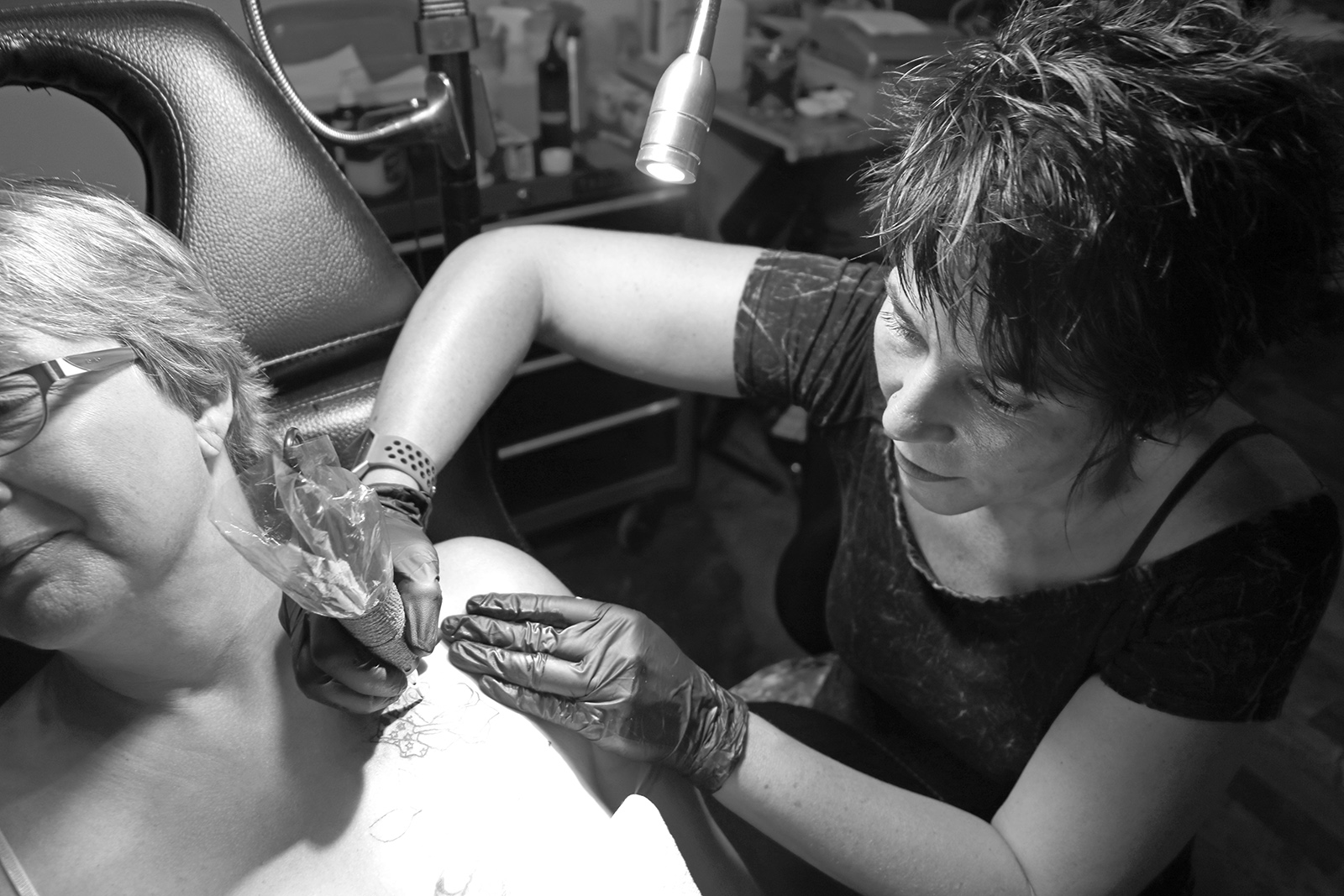 HOT SPRINGS – Since moving to Hot Springs in 2011, Maria March has already made an enduring impact on the community through her work as a mural artist.

From the “Reflections” mural on Evans Plunge and “Branding Time” on Barnyard Veterinary Clinic, to the exterior transformation of the Hot Springs Theatre, to the murals inside local businesses like Coffee Cup Fuel Stop and the Victory Steakhouse in Edgemont – her work is enjoyed daily by hundreds of people and will continue to be for many years to come.

Three years ago, however, through the encouragement of a friend to try a new medium, March is now making very personal enduring impacts on people through her downtown business Body Count Tattoos, now located just across the street from another of her murals entitled “Spirit of the Springs” – the colorful bison painting adjacent to the Hot Springs Police Department office.

For March, she says there’s no better career than “doodling on people and getting paid for it,” as she puts it. But one look at the tattoo’d works of art she creates on people, its certainly far more than doodling for which people are paying her.

She however admits that she was skeptical when she first considered becoming a tattoo artist, unsure of whether or not her artistic skills would be able to translate on to one’s skin. So she began looking at how other artists have taken the skill to a high level by creating beautiful artwork and then began practicing on herself. 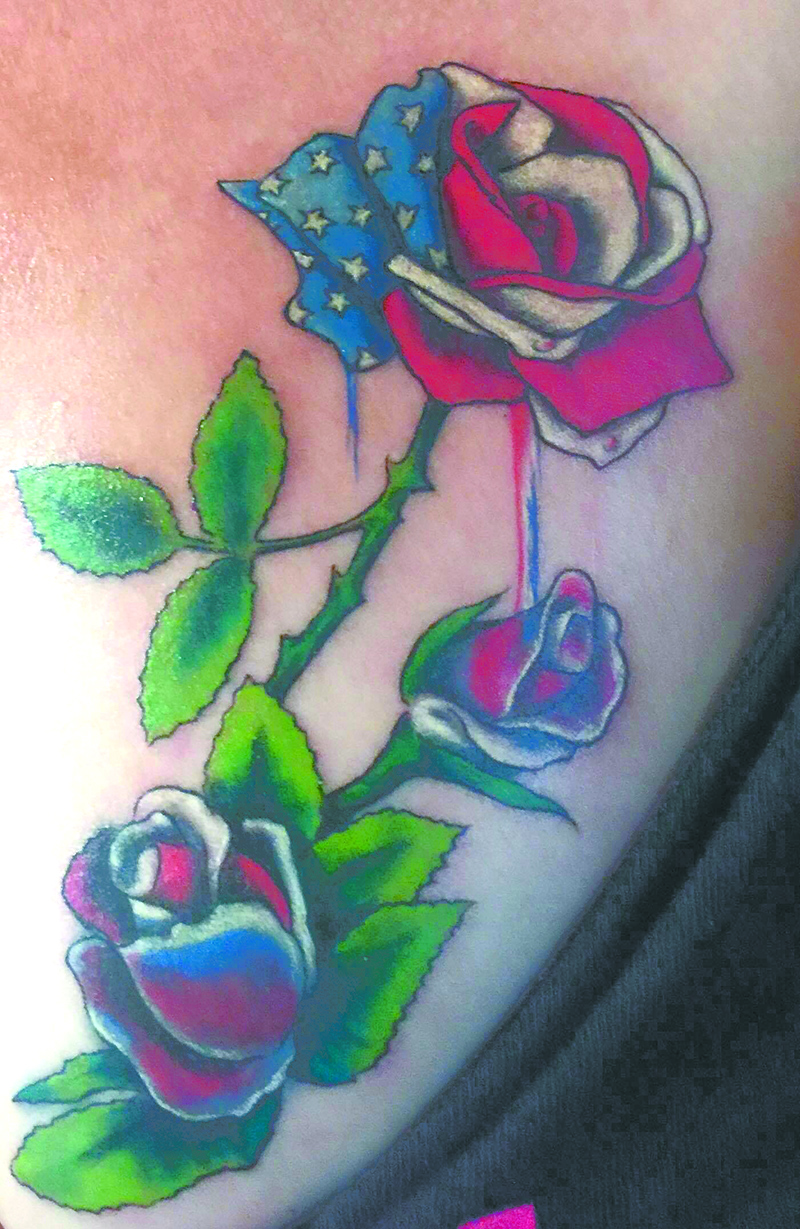 After covering her own leg with her own artistic skills, she was convinced that she could be a top-tier tattoo artists and began offering her services to friends in a make-shift tattoo studio in her Hot Springs apartment.

As word quickly spread of her abilities as a tattoo artist, she soon outgrew her small in-home studio and began renting a small location on North Chicago Street in downtown Hot Springs a couple of years ago.

Recently, that location also became too small, and also with some parking issues, so this past June, she purchased the former Schott Chevrolet building at the junction of Jennings and North River Street, where she performed an extensive remodeling project of the empty building and moved her business.

The mother of two children – Laura age 18, and Kael age 13 – March had also been employed by the Hot Springs School District as the Technology instructor in the middle school, but recently resigned to focus on tattoos full time. And business has been very good, she said.

She’s currently booked into September, and that’s with working full days beginning at 10 a.m., and continuing sometimes until late into the night or early morning hours. Her hours are primarily by appointment only, but on occasion, she has done some walk-in work as well.

Nearly all of her appointments are made through Facebook, and she has a team of friends – Brenda Morrison and Jess Bossingham – who help her out with the scheduling of appointments with them all monitoring the social media site.

About 60 to 70 percent of her customers come to her from out of state – as far away as Texas and California – with many of them either making special trips to her see or scheduling appointments when they plan to be passing through the Hills.

“The word of mouth has been amazing,” March said, as she explained how she hasn’t had a need to do much paid advertising of any kind, as her work advertises itself when her customers proudly show off their tattoos to other and share photos of it on-line.

One of March’s specialties is doing cover-ups of people’s old tattoos. She said most of the cover-ups she has performed are usually due to the original tattoo being of poor quality, sometimes even causing scarring or raised surfaces on the skin. She said oftentimes someone’s bad tattoo can become very traumatizing for a person and cause them to not ever want to have it seen by others, let alone allow someone else to tattoo them again.

“Its really a big deal for them to have trust in me,” she said.

March says her “brain works well” for coming up with creative, and oftentimes, elaborate ways in which to transform someone else’s “bad job” into a magnificent work of art.

As a former educator herself, and someone who was also self-taught in tattoos, March said she enjoys learning new things, so her future career goals include attending tattoo conventions where she can gain access to more experienced tattoo artists and then learn new techniques and ideas.

Listening to March energetically describe her joy of owning her own building and the success of her tattoo business, its obvious she’s having the time of her life, while also appreciating the gifts she has been giving.

“Having people wearing my artwork for life, shows a lot of trust and is a huge compliment,” she said.

ABOVE: Maria March’s Body Count Tattoo business, which started in her apartment, has grown so much in the last couple of years that she’s now in her third location, which the former Schott Chevrolet building she purchased earlier this year.

RIGHT: March creates a work of art on a customer in her new location. A photo of the finished tattoo she is working on here can be seen in the ‘teaser’ column on the front page of this edition.