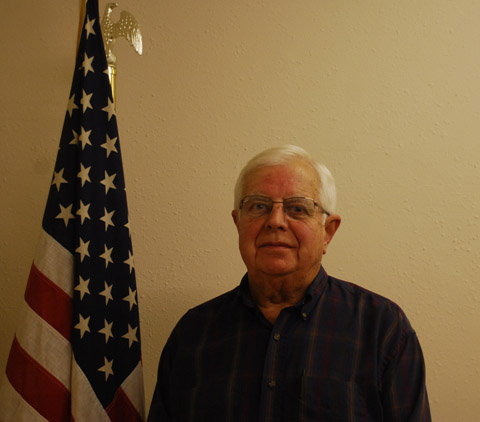 Darrell Du Toit is a Veteran and one of Edgemont's 'native sons'. He was born on June 16, 1935 in the 'Sisters Hospital' at Hot Springs. He is the only child of Donald W. Du Toit and Ella Francis Trotter. In the early 1900's, both families of Du Toit and Trotter homesteaded south of Edgemont, so Darrell comes from real 'pioneer stock.'
The year he was born, was known to have the worse dust bowl storm of the infamous decade known as the 'dirty thirties.' In June of 1935, it also snowed. He was told the first couple weeks of his life he had colic and cried most of the time. That lasted until they put him on a canned milk diet.
Darrell and his parents lived in Edgemont, where his father, Donald, was a barber.
Darrell went to school in Edgemont and graduated in 1953. As a senior, he took flying lessons from Clay Feldhausen at the airport. Those lessons took place three times a week before school started.
In 1942, Darrell's father took over Wade's Grocery store business. The store partnership with Wade dissolved and Don Du Toit bought another grocery store from Mr. Shauld. This store became Du Toit's 'Little Super Market'. Darrell worked there during his high school years, and one of his jobs was delivering groceries. He did that twice a day at 10 a.m. and 4 p.m. He was let out of study hall at school to do the first delivery of the day. After high school, Darrell went to Chadron State College for two years. Du Toit then transferred to the University of Nebraska where he graduated with a degree in business in 1958.
In 1958, he returned to Edgemont to go into business with his parents. He chuckles when he recalls how his parents were 'Uncle Don' and 'Aunt Ella' to all the store employees. From 1958 to 1964, he was in the National Guard. His basic training was at Fort Lenardwood, MO.
Darrell met Evelyn Sumners in Edgemont, while she was visiting her sister and brother in law. Evelyn had gone to Edgemont High School her freshman year. Somehow, since Darrell was a senior, he didn't notice the woman who later became significant in his life. They were engaged in 1960 at the South Shore Boat Club on Angustora Dam. Dutoit recalls the sights and sounds that made the night so special. On the way home the Northern Lights put on a fantastic display, which the newly engaged couple felt was especially for them. They married in Sioux Falls in April of 1961. In the years following, as they began raising a family of three, Tony, Michelle, and Donna, Darrell continued in the family grocery business for 40 years. Darrell and Evelyn eventually took over the grocery store and Wing's Locker Plant, which was where Hat Creek Grill sits today. Darrell was also active in church, Lions Club, the Fair Board, and Edgemont Chamber of Commerce.
During the early 60's, Darrell was a part of a big event. Two big Black Hills Power plant buildings in Igloo were decommissioned and given to the Fair Board. It took three moves to get the buildings here, with the bigger of the two having to be cut in half. There was six inches of clearance as they brought the buildings slowly, carefully down main street, lifting power lines to clear them. Due to complications, Darrell had to meet with the CEO of BHP to finalize the move. These buildings are at the fairgrounds today. One is the big exhibition hall.
Du Toit has been a part of the 'booms' and 'busts' that have made Edgemont the great and diverse community it is today. Some of those were the Uranium Mill's Uranium Days celebration and Wild and Wooly Days. He saw Igloo being created in 1942, and felt the effect on his store when Igloo closed in 1967.
Darrell and Evelyn closed the business in 1998 and sold the buildings. They worked a couple of summers at Heritage Village next to Crazy Horse Memorial. In the year 2000, Evelyn passed away.
For approximately, the next six years, Darrell's job was working for several companies driving truck. He picked up bio-hazard material from hospitals, clinics, and offices in South Dakota, Wyoming and Nebraska. In 2006, he retired and began volunteering at the museum, the senior center and for the bridge building project. He's always pitching in where he can, whether it is a fund raiser or bake sale, and is always good for a laugh or two over something funny.
His current quote is this: "I'm unemployed, and looking for a paying position."