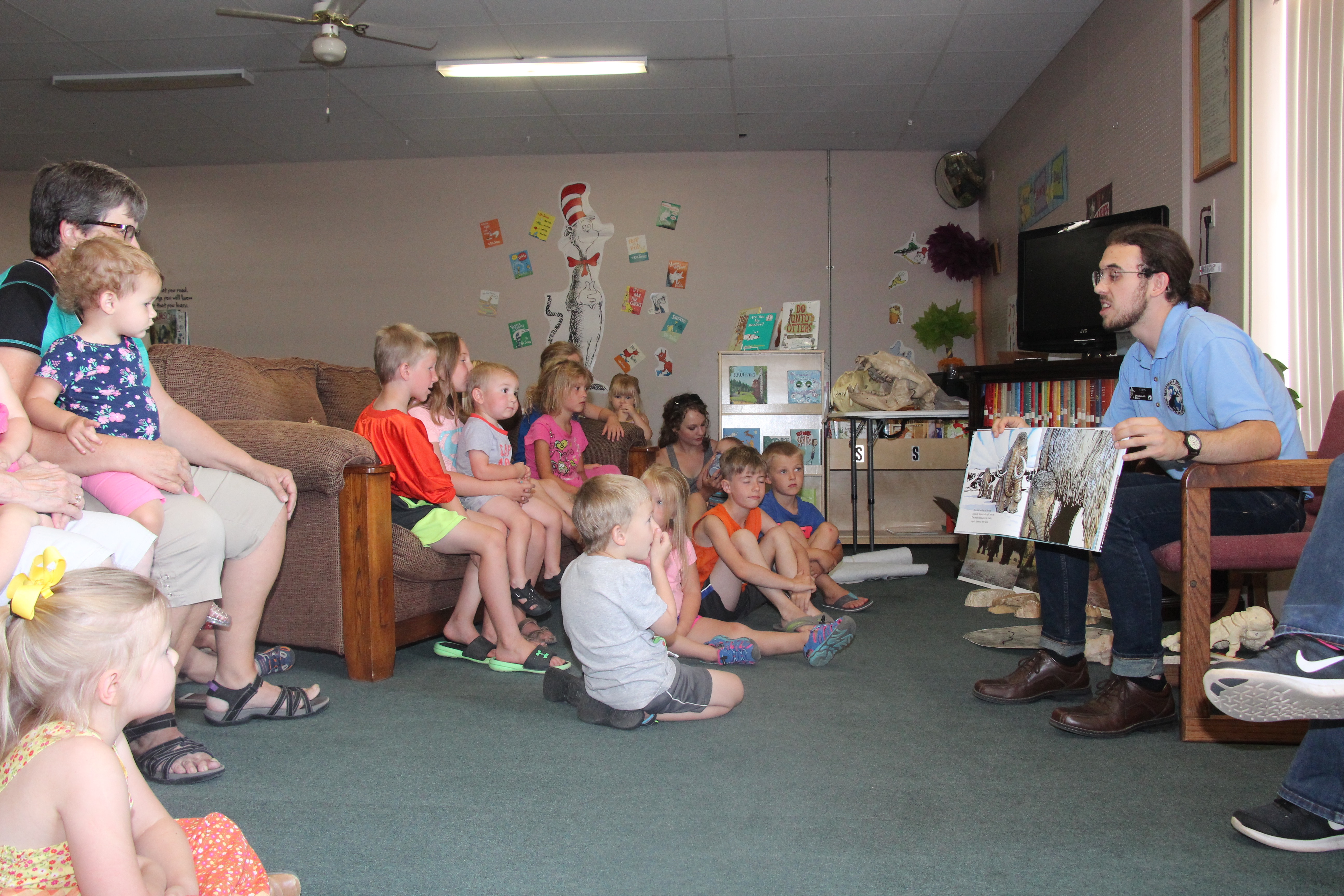 EDGEMONT - On Tuesday, July 24, the Edgemont Public Library provided a very special story time to the young children and library goers of Edgemont. At 10:30 a.m. a large group of children ranging in ages from 7 months to 7 years old, accompanied by several adults, gathered at the library and surrounded the couch to hear all about the area’s prehistoric woolly mammoths.

Ethan Thompson, a 21-year-old summer intern at the Mammoth Site, accompanied the site’s Science Educator and Doctor in Paleontology, Dr. Sharon Holte. Both presented a compelling story time, complete with fossils and an interactive puzzle.

Thompson is in Hot Springs for an internship while pursuing his undergrad degree at Earlham, a small Liberal Arts College in Indiana. Thompson is accustomed to leading learning experiences, as he currently holds the educational classes at the Mammoth Site for its visitors and guides small tour groups throughout the site. While at the library, Thompson read a story to all the story-time goers in an enthusiastic and engaging manner, successfully holding the attention of over a dozen toddlers and young children, evident by the quiet room and still listeners.

During the story, Thompson took the time to inform his little listeners even further by explaining some of the terms he was talking about and relating them to the everyday environment the children experience. Some kids even eagerly offered up their own mammoth wisdom to Thompson as he read the story. Thompson even presented a life-size laminated mammoth footprint to show everyone the sheer size and rounded footprint of a mammoth. The footprint was enormous in comparison to their present day relative, the African or Asian Elephant.

After Thompson wrapped up the story, Holte stepped in to give a more detailed lesson on the bones, teeth and diet of the majestic Woolly Mammoths. She passed around fossil casts of the mammoth teeth for all of the children to feel and interact with. By observation alone, each tooth was approximately the size of a size five woman’s shoe, to provide some context for size.

Holte is no stranger to the Black Hills, having completed her undergrad degree at the School of Mines and Technology in Rapid City followed by her Masters at Eastern Tennessee State University and finally culminating her education with a Doctorate of Paleontology at the University of Florida, Gainesville.

Her research varied throughout her education journey, researching the giant short-faced bears during her undergrad, giant ground sloths for her masters and completing her dissertation for her doctorate degree on 18.5 million year old canids. Even though Holte’s education took her away from the Black Hills briefly, she had spent much of her youth working off and on at the Mammoth Site and returned as a full time Science Educator in mid March 2018. Holte was able to tie her undergrad research into her current position at the Mammoth Site as well as the story time on July 24. With her undergrad degree, she researched the giant short-faced bears, which are also found at the dig at the Mammoth Site. Holte brought along with her the skull of a giant short-faced bear and brought it around for each child to see and interact with. As Holte brought the giant skull around, she had the children point out where they thought various facial features and structures would have been located when the animal was alive.

During this fossil presentation, Holte made the experience even more educational as she discussed the diet of the short-faced bear and how the teeth were shaped differently compared to the herb eating Woolly Mammoths. After she presented the bear’s skull, Holte and Thompson brought out an ice-age old lion skull, far bigger than today’s African Lion’s skull. Once again she had the children examine the skull and observe how sharp the teeth were in comparison to the other two animals, pointing out that the lion had a carnivorous diet and therefore had sharper teeth than the bear and mammoth.

The children listened intently before story time wrapped up with an interactive puzzle. Thomspon and Holte separated into two different groups and had the children all help in putting together a puzzle that would make out the shape of a mammoth.

Suffice it to say, in comparison to other library story times, Tuesday’s gathering provided a story telling of Mammoth proportions.

Dr. Sharon Holte, the Science Educator and Doctor of Paleontology with The Mammoth Site, visits with some youngsters about the plaster replica of a ICE-AGE LION (CORRECTION TO CAPTION IN PRINT) during a recent story time at the Edgemont Library.