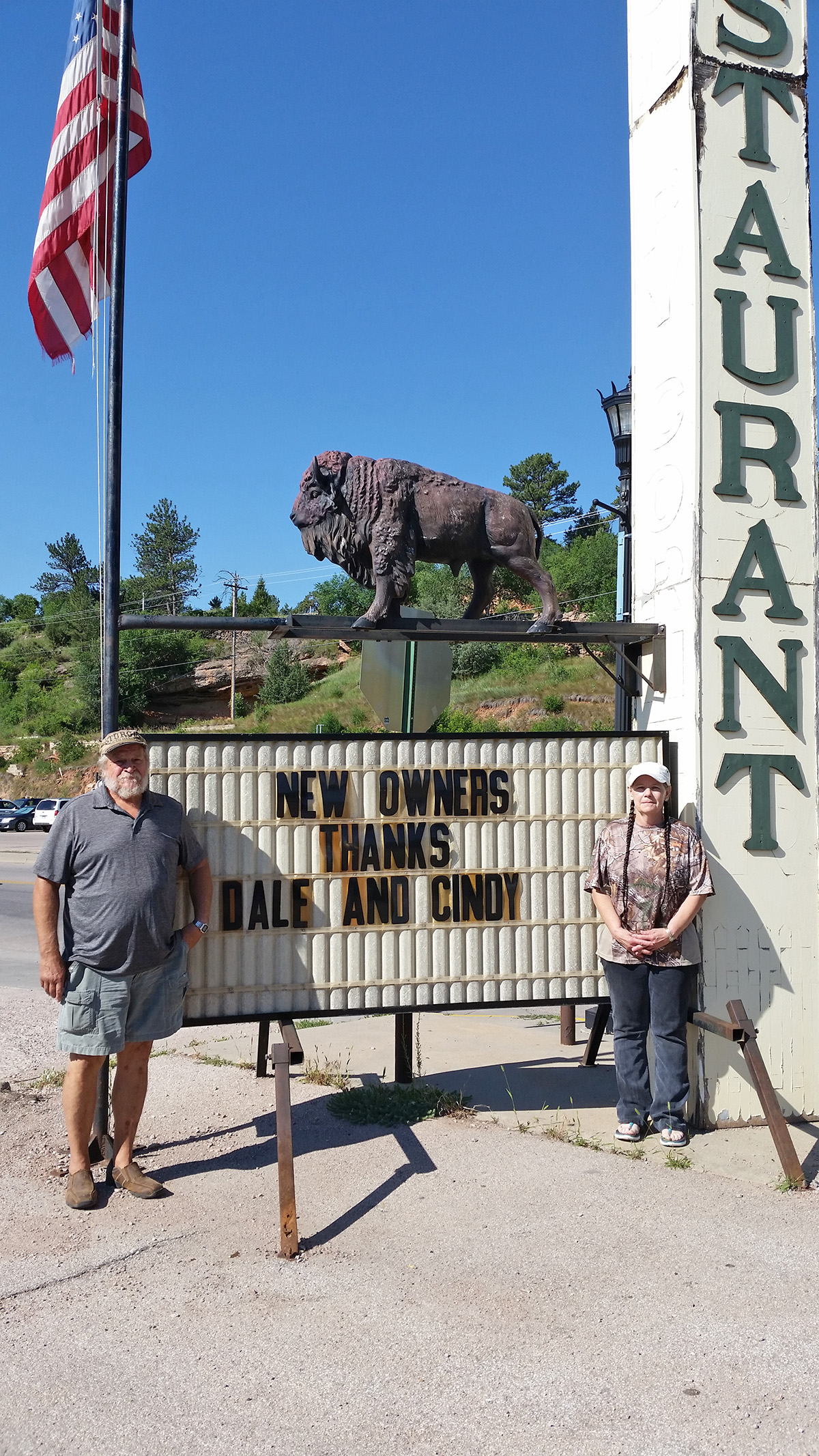 Wedekind’s had owned and operated for more than 18 years

HOT SPRINGS -- If you’ve patronized Dale’s Family Restaurant in Hot Springs recently, you probably noticed there are no more purses, scarves, t-shirts, and other assorted tchotchkes hanging around. In fact, the establishment looks rather different inside, as Dale and Cindy Wedekind have sold the business and relocated the aforementioned sundry products a couple of doors down in Dale’s Trading Post. All that remains are the historic photographs on the walls of the booths.

Despite the missing items up front, many familiar things seem to have remained, as the locals who frequent the restaurant continue to flock to Dale’s, which the new owners -- Aaron and Tara Lauseng -- have declared the name will not change.

A recent cup of coffee and conversation with the Wedekinds in their former ‘home away from home’ revealed their steadfast hold on all things Hot Springs, especially the people they’ve met and known throughout their 18-year tenure at Dale’s.

“We bought it April 28 of 2000,” said Cindy, and they were a bit unprepared for the hustle and bustle of restaurant ownership when they purchased what at one time used to be Cal’s Corner Café. Other names the restaurant has had over the years included Boyd’s and Country Corner.

“I had some experience in food service,” said Cindy, “But Dale didn’t know anything about running a restaurant. We learned by our mistakes.”

In the beginning Dale had a welding shop. “Then my knees went bad,” he said, and he came to work in the restaurant, managing the front of the house, while Cindy prepared hash, biscuits and gravy, and thousands of eggs and pancakes in the kitchen.

Dale said the hard work wasn’t surprising, as he’d milked cows for a number of years, a daily occurrence. “Cindy worked me into it,” he said. “He was my PR person,” said Cindy. Dale quipped back, “No, I was your BS person.”

After 18 years of arising at three o’clock in the morning to do the countless tasks in order to unlock the doors at 5:30am, Cindy said she is ready to sleep in and slow down. One of her favorite things about not having that responsibility any more is that she no longer has to wear close-toed shoes, a must in any commercial kitchen.

“I don’t have to wear shoes anymore,” she said as she looked down and wiggled her toes in a pair of summer sandals. Cindy also said that she’s relieved from the pressure of running the restaurant seven days a week.

Most of their best memories of the business include their customers. “A lot of people come back year after year, especially during rally time, saying they’ve gotta eat at Dale’s,” said Dale.

What they will miss most are the people they have met and served over the years, especially the locals. Cindy said she always wanted it to be a special place for the locals to eat, and they have catered to the local population during their reign as owners of Dale’s.

“All the old guys who come in every day, all the stories you hear from customers, it’s irreplaceable,” Dale said nostalgically. His favorite stories were from Bill Hacker, a Hot Springs fixture who has since passed on. “His stories alone were worth a million dollars,” Dale reminisced.

One customer told Dale he’d counted the number of breakfasts he’s enjoyed there, and tallied a whopping 900, which amounts to about 50 meals annually.

Many of the customers talked about how much they’ve enjoyed dining there. “It’s a great place to go have coffee and visit each morning, and we’re going to miss them,” said Joan Hento. Her husband Jake agreed.

Lena Walker said she and her husband, K Walker, have been going to Dale’s a very long time. “It’s a very nice place and they are wonderful people,” Lena said. K agreed, “We come here at least three or four times a week.”

Marilyn Beeman proclaimed, “I am really happy for them. They have served us so well for so many years and I am so thankful they’ve been here. I wish the new owners such a wonderful business and God’s blessings.”

Perry Holmes, enjoying coffee with friends, said, “The food is good, so I come here quite often, especially in the morning, and there are a lot of nice people.”

Another regular, Judy Klein, remarked, “We’ve come to Dale’s for as long as they’ve been here. It’s a nice little gathering place for the community and we know a lot of the local people, and off-season we get to know the tourists, and it’s kind of nice. We’re going to miss Dale and Cindy.”

Suzanne Embry commented, “We’ve been coming here eight years. I wouldn’t dream of going anywhere else for breakfast. This is our morning home and we know everybody. I’m thrilled for Dale and Cindy and I wish good luck to the new owners.”

Through the summer, the Wedekinds will be operating the Trading Post on weekends. After that, they hope to go camping in the Bighorn Mountains of Wyoming. “It’s been 18 years since we camped there,” Cindy said. “Our main goal is just to get in the camper and go, seeing as much as we can, enjoying life as much as we can, doing things while we still can.”

To all of their customers, the Wedekinds agreed, “It was wonderful to have all the customers be with us all these years to keep us going and all the friends we have made. We already miss them,” said Cindy.

Dale & Cindy Wedekind pose in front of the sign that’s been a Hot Springs fixture for more than 18 years. Retirement beckons as they continue on their life’s journey.