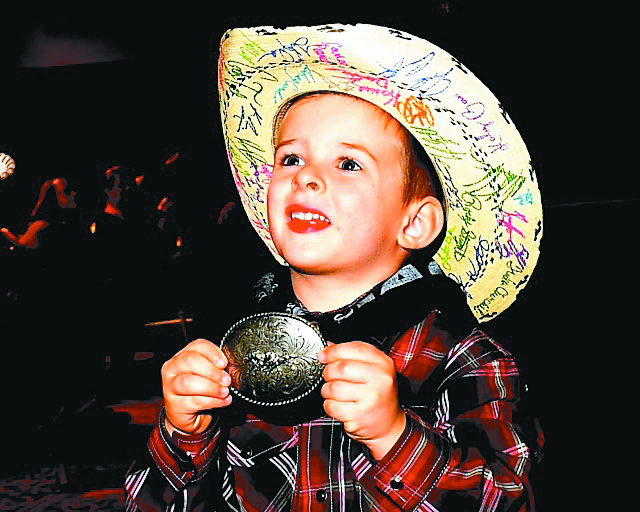 HOT SPRINGS -- The Children’s Western Wish Foundation (CWWF), as the name suggests, surprises recipients by honoring them, often at rodeos. Their mission statements reads, “We are all Children of God” allowing them to select adults or children as recipients. Those who have received include cancer survivors and patients, veterans with severe PTSD, disabled or injured individuals.

A native of Edgemont, Glee Nett, who now hangs her hat in the Hot Springs area, is the founder and national wish coordinator who keeps the organization on the straight and narrow, behind the scenes. She organizes things and the foundation pays for all expenses related to a western wish, but Nett is not the focus—the many recipients are.

The actual presentations are often in the arena by the rodeo committee or by members of the rodeo “family,” who are contestants or others involved in the sport. The WPRA (Women’s Professional Rodeo Association) holds an annual banquet in honor of the top-15 barrel racers of the year. A female wish recipient is invited as a guest, given a tiara and declared an honorary princess at the banquet.

The CWWF was officially recognized by the IRS as a nonprofit in 2006. Though primarily self-supporting, many individuals and groups help out. Each rodeo committee donates tickets to the rodeo performance for the family. Clyde and Elsie Frost, parents of the late PRCA world champion bull rider Lane Frost, annually donate 100 cowboy Bibles to be distributed by the program. A group of women in Laramie, Wyo., has been making prayer quilts for those receiving a western wish.

The Foundation supplies each beneficiary a full set of western wear—Wranglers, long sleeved western shirt, boots, and a cowboy hat so they can be properly attired. One of the standard gifts is a custom belt buckle. Little girls receive a sash, signifying each one is a special princess. The straw hats are autographed with nine different colors of Sharpie markers by the cowboys and cowgirls who are participants at that rodeo.

Wishes are even granted for one male and one female and their families who receive an all expenses paid trip to the Wrangler National Finals Rodeo. Michael Gaughan, owner of the South Point at Las Vegas, sends limousines to pick up the family and deliver them to the front of the Thomas and Mack arena, the location of the National Finals. Gaughan also donates a vest from South Point, embroidered just like the contestants’ vests.

Referral forms are on the website, www.CWWF.org, yet the forms are not the only way one can be referred. Other avenues include veterans’ hospitals, churches and individuals who see a need and pass on information to the Foundation.

Once a selection is made, personal information such as clothing and boot sizes is garnered from a family contact. That person knows there will be a presentation but not the details; it is all a surprise to the recipient. Many of the honorees have never attended a rodeo, and the special designations are simply a gift from the rodeo family.

Recipients have been selected for the Central States Fair and all area county fairs for the 2018 season.

Cayden was seven-years-old in this 2014 photo where he was a recipient at the Wrangler National Finals Rodeo. The photo shows the autographed hat and the custom belt buckle given to wish recipients. Cayden is challenged by a malignant brain tumor and is still in treatment. Doctors have noticed the tumor has shrunk somewhat in the last few months.