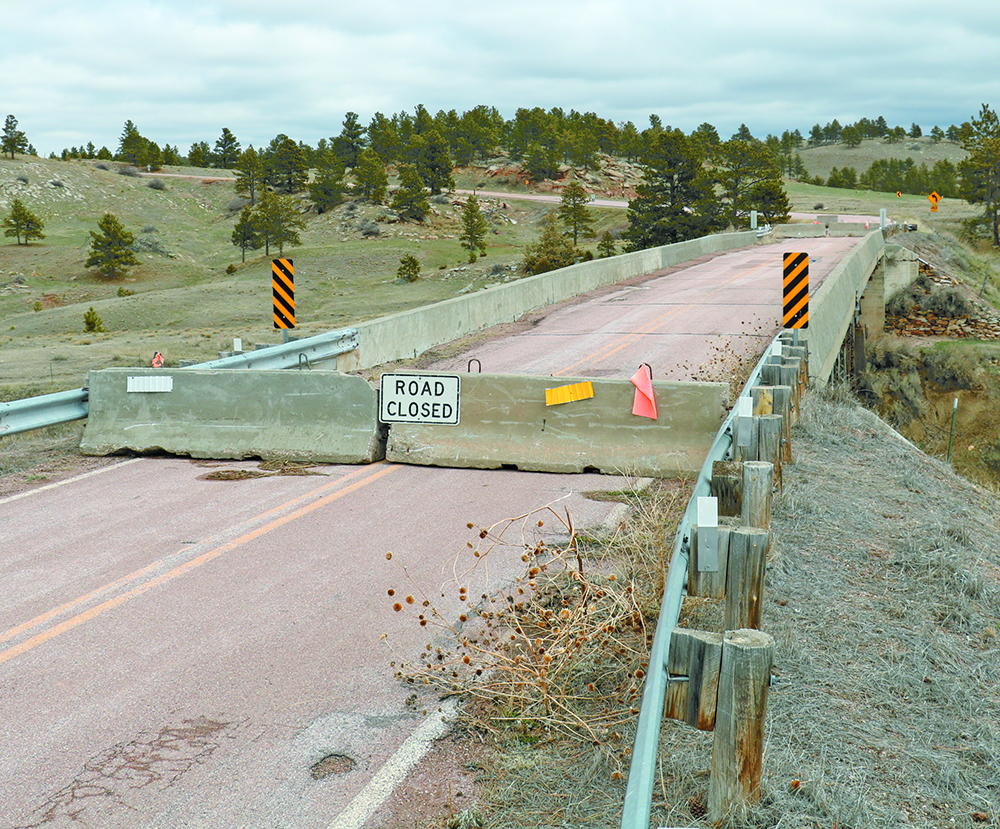 HOT SPRINGS – Four county commissioners want to go forward with building a new Chilson bridge, while one wants to continue investigating a different option that could save some expense.

During the Fall River County Commissioners’ meeting on Tuesday, July 3, Commissioner Paul Nabholz reported that he had received permission from landowner Jim Miller to walk his property to the north of the Chilson bridge to see if a north at-grade crossing would be possible. Nabholz said that the crossing possibly could be built at the cost the South Dakota Department of Transportation (D.O.T.) would pay.

Nabholz also reported that he contacted D.O.T. Engineering Supervisor Doug Kinniburgh about the cost of the bridge, and Kinniburgh told him that the $1.2 million estimate stated at a previous meeting could be low, and that the cost could be $1.7 million. Nabholz also said the daily traffic counts at the bridge were 30 and 45 in 2005 and 2011, which he said is below the 150 count needed to construct an asphalt road.

“It’s still nuts to install a bridge with this low use and high cost,” Nabholz said. “I again make the motion to have Ross look at the detailed budget to see if we can build some form of crossing for the $966,400 offered by the state.” However, the motion was not seconded by the other commissioners. Commissioner Joe Allen said that there had been enough delay, and it was time to move ahead with the bridge.

At their meeting held on June 7, the commissioners, in a four-to-one vote, agreed to move forward with a plan to build a new bridge to replace the now-closed Chilson Bridge that spans the Mickelson Trail along Old Highway 18 between Hot Springs and Edgemont. The original structure was condemned last summer due to safety concerns caused by its disrepair. The estimated cost of $1.2 million, which now could be more like $1.7 million, would be divided between the state paying 80 percent and the county paying 20 percent.

On another topic, Building Supervisor Lyle Jensen presented a quote of $1,659 for three bullet resistant panels for the judge’s bench in the courtroom. The panels are each three feet by eight feet and a level 3 and resistant to .44 magnum. They will be placed inside the base of the judge’s bench area. The county’s cost will be half or about $830. The purchase was approved.

Jensen is investigating ways to improve the acoustics in the South Annex meeting room to make it more desirable for meetings and other events. After checking with Haggerty’s in Rapid City, he said the cost of an acoustic panel was quoted at $5,792, and with installation and hardware, it would total $8,726.55. He has checked into using ceiling tile and carpet, but “they would cost more,” he said. He will try to negotiate a better price for the acoustic panel, he said.

D.O.T. officials will be in Hot Springs on July 18 and 19, Jensen said. They will walk the street through town in preparation for the 2020 reconstruction of the highway through Hot Springs. Jensen said parking spaces will be changed in front of the courthouse from the northbound side to the southbound side.

Dusty Pence of rural Hot Springs was in the audience and said she had talked with the D.O.T. office in Custer and that at least 80 parking spaces will be lost when the highway is revamped. She urged people to attend the D.O.T.’s public hearing in Rapid City on July 12 at the Ramkota at 7 p.m. The Statewide Transportation Improvement Program (STIP) 2019-2022 schedule can be found at sddot.org.

Director of Equalization Susie Simkins inquired about who should pay the cost for workers to take CPR (cardiopulmonary resuscitation) certification classes. She said the cost is $40 a person. After discussion, the commissioners decided to invite a trainer to the courthouse to teach CPR classes.

Emergency Manager Frank Maynard said the county needs more people to sign up to do drought monitoring. Right now there is only one weather sensing station operating in the county.

Lindsay Luper, who recently opened a Edward Jones business in Hot Springs, introduced herself to the commission and invited them to look into the investment options she has to offer the county.

Commissioner Joe Falkenberg reported on Prairie Hills Transit, which is a nonprofit business with an office in Spearfish. He said the City of Hot Springs did not include funding for Prairie Hills in their 2019 budget. “Veterans can ride free,” Falkenberg said. “This transportation is important for older people. This is important for all of us.” He suggested having a public meeting to discuss support for Prairie Hills Transit. “The hospital and nursing home use it a lot,” Commissioner Deb Russell said.

Auditor Sue Ganje reported that there will be an upgrade in voting equipment with no cost to the county.

Ganje also reported on the Payments In-Lieu of Taxes (PILT) class action law suit. The PILT program compensates eligible local jurisdictions for federal lands administered by the agencies within the department and on behalf of the U.S. Forest Service and the U.S. Army Corps of Engineers. Local governments may use the PILT payments for any governmental purpose, including emergency response, public schools and roads. For 2018 Fall River County received a PILT payment of $730,551. Due to insufficient appropriations for 2015–2017, PILT recipients did not receive the full amount to which they were entitled under the PILT statute based on the Department of the Interior’s full payment calculation. To participate in the class action lawsuit and collect possible amounts due them, each underpaid PILT recipient must complete and submit a form “opting into” the lawsuit. The commissioners voted to participate in the class action law suit.

In other business the commissioners approved the following:

• Sheriff Bob Evans’ request to hire Daniel Leetch as a jailer for $14.50 a hour. * A request by Lori and Sean Wieseler of the Winner’s Circle for a temporary license to sell liquor at Allen Ranch on July 7.

• Travel to meetings for Dan Cullen in August, and for Susie Simkins and Caitlin Turner in September

The commissioners went into executive session for Legal and Personnel.