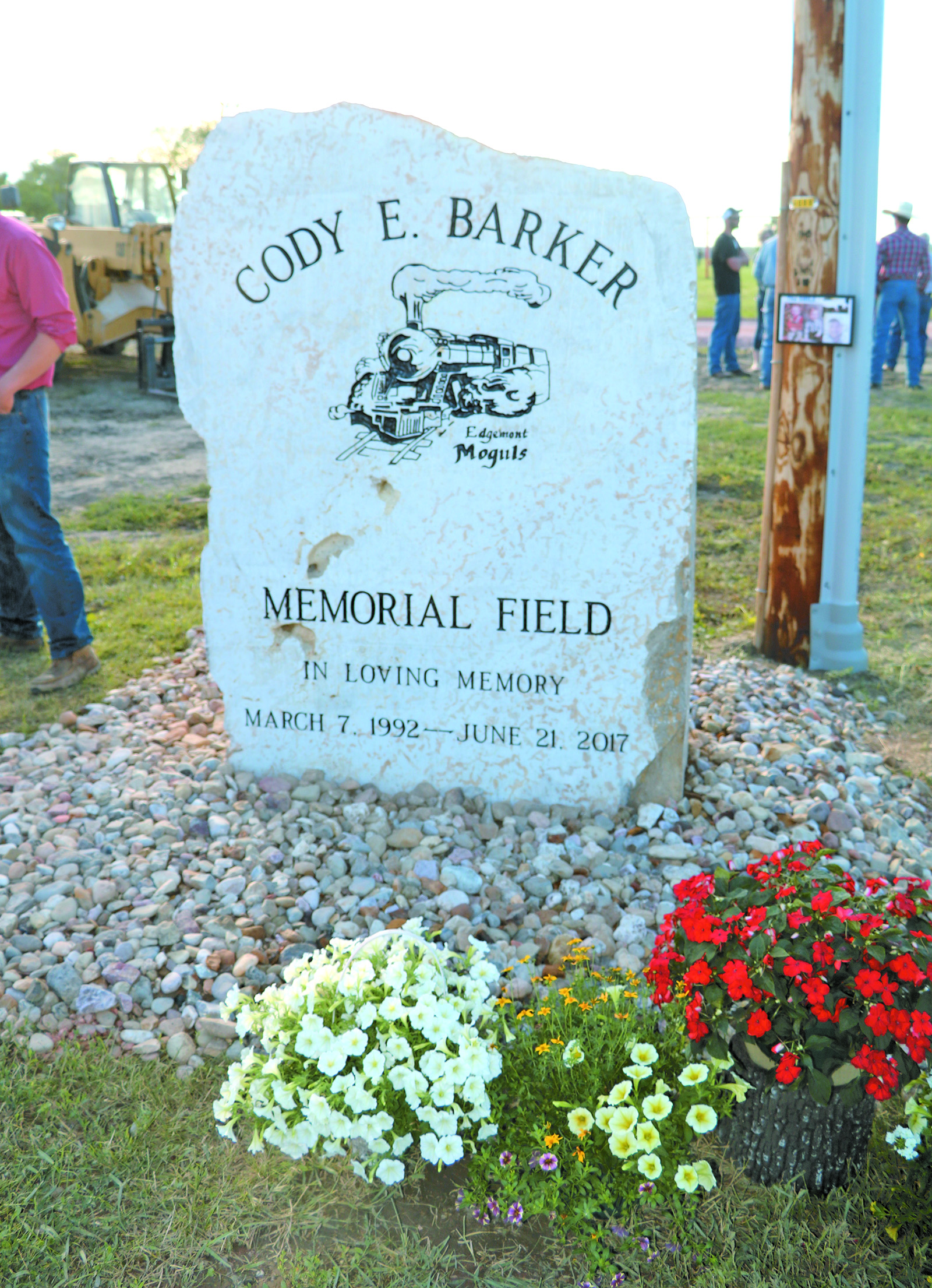 EDGEMONT – Looking around at the near 200 people who had gathered at Edgemont High School’s new football field and track last Thursday evening, June 21, Kerry Barker stood in awed appreciation.

“This is the kind of support we have received throughout the project, and also through the tragedy,” Barker said. “This is just a great community.”

Just over one year ago, Kerry, along with his brother Kelvin and son Cody, had an idea to reposition the school’s football field to add an all-weather track. They presented their concept to the school district, and with their blessing, began work on the project in early June of last year.

Kerry’s son Cody, a 2015 college graduate of South Dakota State University with a degree in Construction Management, had recently moved back to Edgemont and gone to work in the family business – Barker Concrete & Construction – with hopes of one day taking it over, as his own, from his dad. While Cody did not graduate from Edgemont High School, he did spend most of his younger years in the community before moving to Rapid City to live with his mom Gaylene and graduating from Rapid City Central in 2010.

“Cody was very excited about the project,” Kerry recalled last week during the field’s dedication, as he described how Cody had talked to a lot of people to help lay the ground work for the project that was to help give a boost to Edgemont’s community pride and school spirit.

Tragedy however struck, on June 21, 2017, when Cody, at the young age of 25, was killed in a commercial vehicle accident near Shawnee, Wyo. Barker was driving his truck tractor-trailer combination when the front passenger tire failed, causing him to lose control and crash. The incident occurred just days before the bulk of the work on Edgemont’s new football field and track was to commence.

As it has always done, in good times and in bad, the community of Edgemont was quick to respond to the needs of the Barker family, and was there to support and console the many family members who have called Edgemont their home, since Kerry’s father Kenneth moved to the area in 1951 and then raised their six children with his wife Verna. 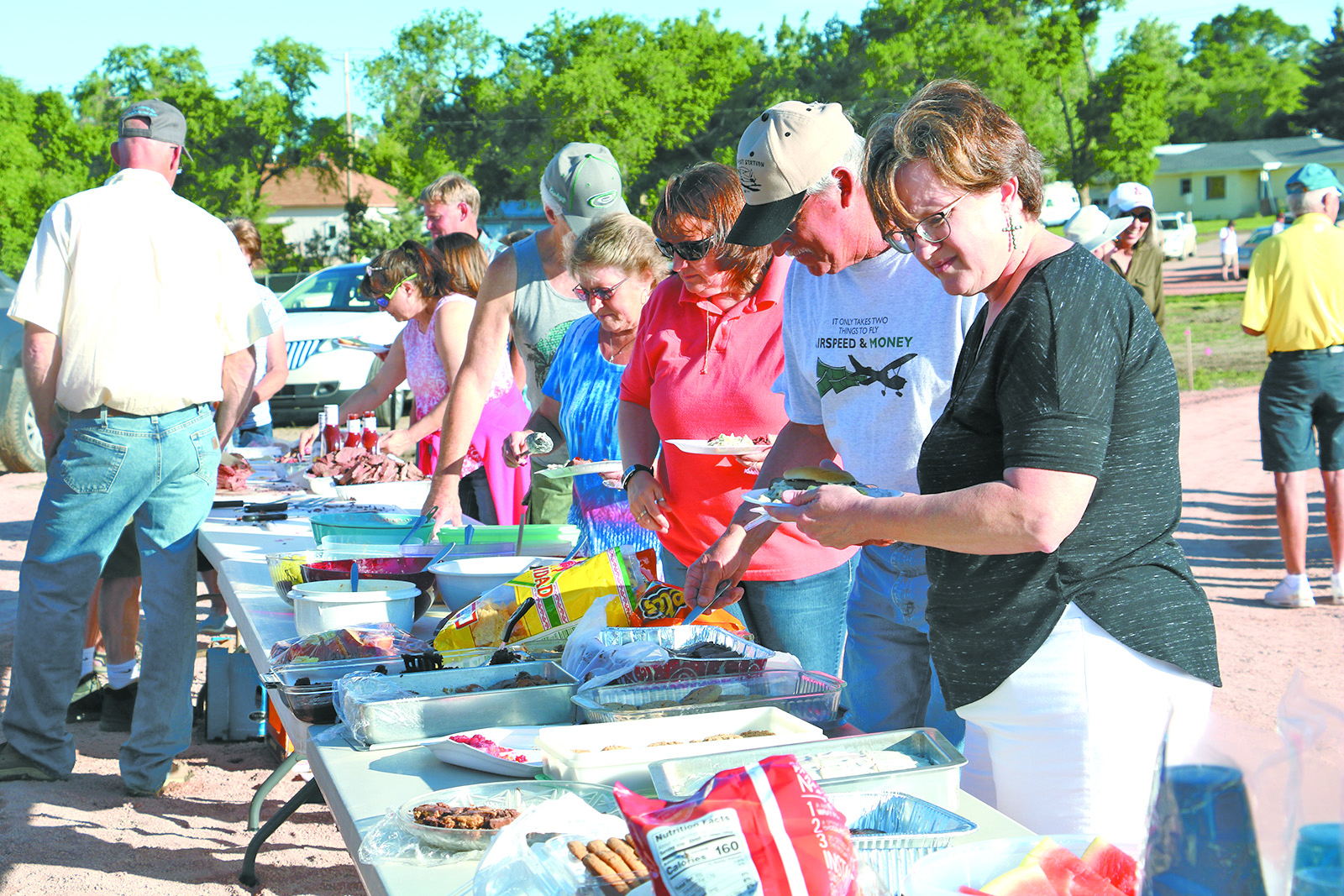 As was the case again, last Thursday evening, June 21, 2018, one full year, to the day, when tragedy struck. The community of Edgemont was there again. But this time in a more joyous occasion, as they celebrated the work that had taken place over the past year on the football field and the track, as it was officially dedicated and named Cody E. Barker Memorial Field.

The ceremony began with the crowd gathered around an approximate 6-foot tall x 4-foot wide stone monument located at the south entrance to the field. Kerry said a few brief words, thanking everyone in attendance and all those who had helped with the project in some way.

“I can’t thank everyone enough,” Kerry said, as he recognized the gargantuan effort of volunteerism that it took to get the field to where it was today. Cody’s mom Gaylene also said a few words of appreciation for those who came.

With that, the monument was uncovered as the crowd cheered and applauded and began taking photos with their cell phones. The monument, made from South Dakota Granite weighing 6,000 pounds and harvested from a field near Highmore, features the Edgemont Mogul school logo and engraved to read: “Cody E. Barker Memorial Field, In Loving Memory

The dedication was then followed by a community potluck, featuring beef prepared by the Barker family, along with a table full of community-provided sides and salads for all in attendance to enjoy.

Lane Ostenson, the school’s new CEO and Activities Director, said the football field itself ready to go for the much anticipated upcoming 2018 football season, after the Mogul team had to play all of its games on the road last season while the field was being built. The former field was located in the same area, but situated slightly different and ran parallel with the nearby streets. The new field is angled slightly and now surrounded by a six-lane rough-surfaced track. Ostenson said the all-weather track is a goal for the future, but that for now, the track teams will use the current surface for practice, but he did say that there is a junior high meet scheduled for the spring of 2019.

Ostenson said the school board had approved $40,000 of school funds towards the project, but he added that he wasn’t sure how much, or even if the school has come anywhere near spending those allocated funds, thanks to the tremendous amount of volunteered labor and supplies that has come forth from the community.

“The dirt work alone that the Barkers have done themselves is probably worth $200,000 to $250,000, which has all been donated,” Ostenson said, while adding that it would be extremely difficult to put a price tag on the amount of work that has been put forth so far.

Likewise, Barker too was hesitant to estimate a value on the amount of work put forth towards the field and track so far.

“When you look at what Hill City, Newcastle and Wall have probably spent recently to do their field, I’m sure they’ve spent a pile more than we have, thanks to all of the community support we’ve gotten,” Barker said. 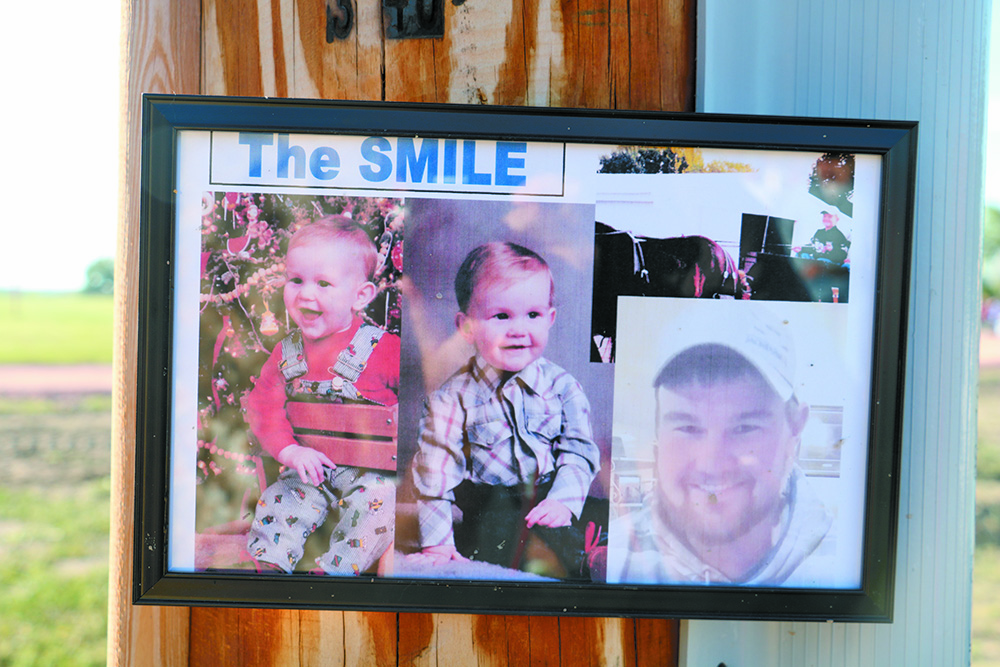 To try and list everyone who has helped so far was something Barker also hesitated to say, in fear of forgetting someone because the list is so long. He did however say the Alumni Association has been a huge contributor, along with so many more families, individuals and local businesses. Donated labor and materials are featured throughout the project – from the sprinkler system, to the light poles, and to the concession stand. Its the volunteers were who made it happen, Barker and Ostenson said.