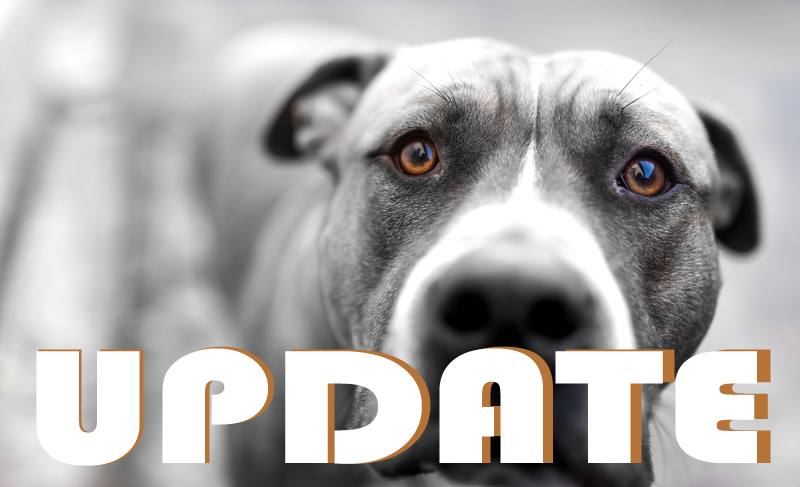 HOT SPRINGS – As of Monday, June 25, the male pit bull, involved in an incident at the Evans Apartments in which two people were bitten while trying to interfere with an altercation between that dog and another, was still impounded at Barnyard Veterinary Clinic.

According to Hot Springs Animal Control Officer John Wishard, the pit bull was in mandatory quarantine for 10 days following the incident, which occurred on the evening of June 11 in the stair well of the apartment building when the pit bull attacked a male lab-mix that was being walked by a citizen nearby. The person walking the lab, who suffered serious bite wounds from her own dog during the altercation between the two dogs, attempted to evade the oncoming attack of the pit bull by entering the Evans, which is also where the owner of the pit bull resided. The lab-mix also suffered wounds which required veterinary care.

Per city ordinance, the pit bull owner, who was also bitten by his own dog while trying to break up the fight, was issued a $500 citation for his dog’s role in “assisting” with an incident in which a person was bitten.

Wishard said the pit bull’s owner, who he did not identify by name, had until Wednesday, June 20, to either relinquish his rights to the dog and have the city euthanize it as a “Dangerous or Vicious Animal,” or request a court appearance to have the fate of the dog determined by a magistrate judge.

According to the Clerk of Courts office, a hearing has been set with the judge for Wednesday, June 27. Wishard said the judge will likely either order the dog to be euthanized or potentially return custody back to the owner but require him to take it out of city limits.

HOT SPRINGS – A male pit bull dog was quarantined and could be euthanized as a result of an incident that took place inside the Evans Apartments in downtown Hot Springs last Monday night, June 11, just after 6 p.m.

According to Hot Springs Animal Control Officer (ACO) John Wishard, and confirmed by Hot Springs Housing Director Greg Foust who oversees operations at the Evans, a male resident of the Evans Apartments was walking his pet pit bull just outside of the apartment building on N. River Street when he lost control of his dog as it reacted aggressively towards another dog being walked nearby.

The other dog, a male labrador-mix, was being walked by a female citizen who did not live in the Evans but sought shelter inside the Evans when the pit bull started to come at her and her dog. Foust said he was told a resident of the Evans attempted to let the lab-mix and the citizen inside a stairwell for safety but was unable to close the door in time, which allowed the pit bull to enter the building and attack the other dog.

During the incident, ACO Wishard said both the owner of the pit bull and the owner of the lab-mix suffered bite injuries, but that it was his understanding, the injuries each person sustained were from their own dogs as they attempted to interfere with the altercation between the two dogs.

Wishard said once the dogs were able to be separated, the owner of the pit bull and his dog fled the scene. The pit bull was located about 30 minutes later nearby, between two buildings along North River Street, but secured to something with a belt tied around its neck. Authorities searched for the owner of the dog for approximately 24 hours, but then did find him.

The female who was walking the lab-mix suffered a serious bite wound to her left forearm which required emergency medical care at Fall River Hospital. Her dog also suffered injuries which required veterinary care. Wishard said there was very little visible blood and visible trauma to the dog, however, he said it could barely walk and just wanted to lay down.

Chief of Police Mike Close said the owner of the pit bull, whose name he did not release, was to be issued a $500 citation under the city’s “Dangerous or Vicious Animals” ordinance, for his animal’s role in “assisting” with an incident in which another person was bitten, even though his dog was not the one that bit the other person.

Wishard said the pit bull was to be held in quarantine at Barnyard Veterinary Services in Hot Springs for 10 days, which ended on Wednesday, June 13, after which the owner could claim his dog and then request a hearing before a Magistrate judge to keep his dog. If he does not claim his dog, or waive his opportunity for a hearing, the dog will be euthanized as being deemed a dangerous or vicious animal under the city ordinance. The owner was also to provide a statement about the incident and proof of vaccination, including rabies, which he still had not as of the press deadline last week.

According to Foust, residents of the Evans Apartments are allowed one pet per living unit, provided the animal is under 30 pounds. However, additional allowances are granted for persons with disabilities whose needs fall under approved Housing and Urban Development guidelines, which make it possible for some residents to have pets much larger.

Foust said this Evans resident with the pit bull had met one of those HUD requirements, but an additional requirement was that he must keep the dog under restraint at all times. However, since the dog broke free of the resident’s control during the altercation with the other dog, he then was not in compliance with the building’s rules and in violation with his lease. Foust said management would be looking at the incident more closely and possibly taking action in regards to the tenant’s living arrangement at the Evans.

In his 30-plus years in property management, Foust said this was the first time he had ever experienced a similar situation in which a tenant’s dog was involved in an incident which required serious medical treatment for a dog bite.

Likewise, Wishard said he has also rarely dealt with an incident in Hot Springs in which the injuries to a human were as severe, but the last time it happened, it did force a change in the city ordinance which no longer gives dog owner’s a second chance, or “freebee,” when their dog is involved or assists with a serious incident.

As the town’s ACO for the past three and a half years, Wishard said he recalls one other incident in which a person suffered a serious bite wound as they were walking on the sidewalk and approached by another individual who was walking a pit bull on a leash. The dog had no history of being vicious, but lunged toward the oncoming person and bit her, causing physical wounds which required medical attention.

Wishard said the city ordinance at that time allowed the dog one “freebee” incident before the city could force serious action, like euthanasia of a vicious animal, but the owner of the that dog eventually decided to remove it from the city limits and live with a relative outside of town. The issue however did force city officials to look at and eventually change the ordinance which allows for quicker action in relation to dangerous or vicious dogs.