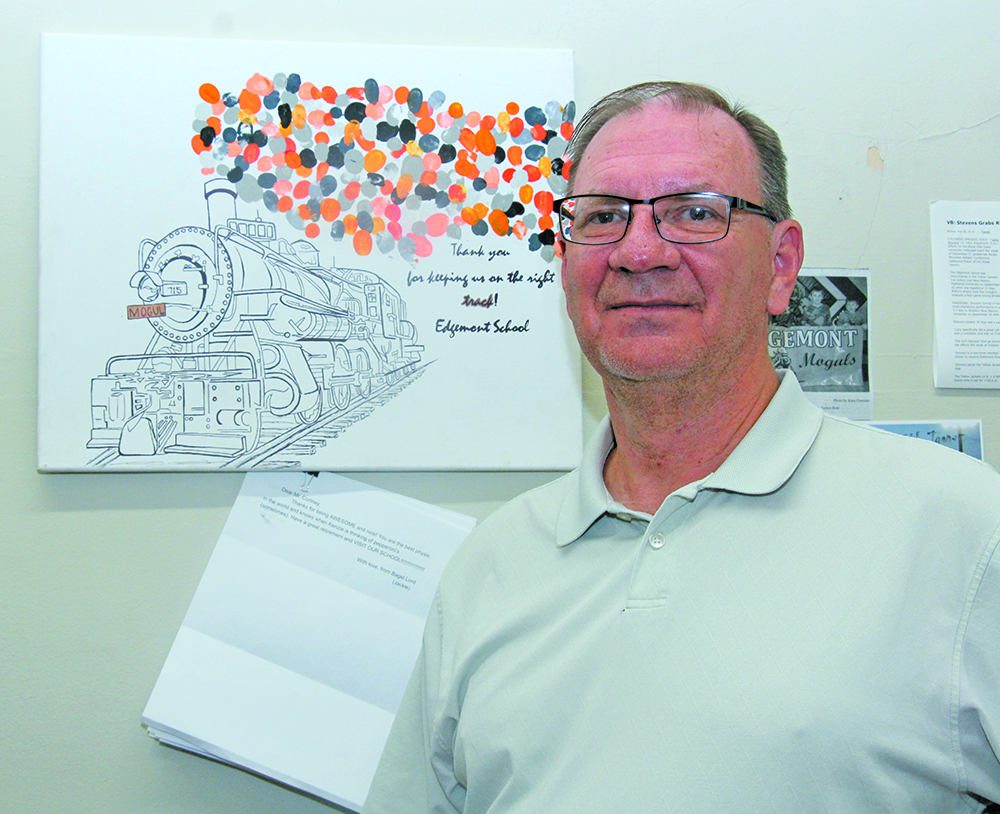 EDGEMONT — After 26 years in the education system and many years fulfilling administrative roles at three different schools, Edgemont Superintendent Dave Cortney is stepping down from his current position and embarking on the journey of retirement.

Cortney graduated high school in 1975 from Kimball County High School in his hometown of  Kimball, Neb. After his high school graduation he went on to get his Bachelors of Science in Physical Education and Coaching from Chadron State College in 1980. Cortney’s encounter with higher education didn’t stop with his B.S. degree and he went back to Chadron State College and acquired his Elementary Education Endorsement in 1987 and a Master’s degree in Administration in 2001.

His additional endorsements and degrees would allow him to expand his horizons and venture outside of teaching Physical Education, leading him through a journey of teaching and administrative positions.

Cortney’s teaching career began at Cottonwood Country School in Sioux County, Neb. where he taught for two years from 1988 to 1990. In 1991, after Cottonwood, Cortney taught for one year at Alpha Country School about three miles east of Chadron, Neb., teaching third, fourth and fifth graders. From there, Cortney ventured to Wolf Creek in Shannon County, SD, teaching one year of eighth grade in 1991 and seven years of third grade through to 1999 before becoming Principal of Wolf Creek for four years from 1999-2003.

Prior to becoming principal of Wolf Creek, Cortney was actively completing his practicum for his Masters in Administration degree from Chadron when the acting principal suddenly left the post, leaving an opening for Cortney to become the new principal. As the principal at Wolf Creek, Cortney oversaw over 500 students and 120 staff members and was thrust into this position during his student teaching years. “I call it baptism by fire!” recalled Cortney of overseeing over 620 different personalities during his very first year in administration.

Following his time at Wolf Creek and having survived over 500 students, knowing each face by name, he continued as principal at another school in Shannon County for one year, Rocky Ford Elementary. Cortney took one year off before accepting a position for the Edgemont School District. Cortney’s career at Edgemont began in 2006 as the 6th grade teacher and soon thereafter taught 7th and 8th grade for two years from 2006 to 2008.

After being away from an administrative role since 2004, Cortney became the Edgemont School District Superintendent and K-12 Principle in 2009, while continuing to teach 7th and 8th grade classes, splitting his time as admin and teacher 50/50. The following eight years, Cortney’s role was altered so he could focus 100 percent of his time as the Superintendent and K-12 Principal, and fulfilled this role from 2009 to 2016. For Cortney’s past two years at Edgemont, his role changed one last time and he took on Superintendent and K-8 Principal from 2016 to his retirement at the end of this month on June 30, 2018.

Through all of his time as teacher and administration, Cortney said he enjoyed it most when he was able to interact with kids on a daily basis, getting to really know each student. His favorite years were spent teaching 6th, 7th and 8th grade at Edgemont.

After being at a school with over 500 students at Wolf Creek, Cortney really appreciated the smaller school system and stated his favorite part about EHS was, “being able to talk to the students and saying good morning everyday as I passed by them. Being able to know how they are doing, learning about what is important to each of their lives and getting to know and understand whats going on their lives.”

In respect to his daily interactions with students, Cortney relayed, “I believe strongly in letting kids know you are around and present for them.”

In a recent interview, Cortney was asked a difficult question, to sum up his time at the Edgemont School District preceding his retirement. Without hesitation Cortney endearingly stated, “It has been the most rewarding, enjoyable time of my life.” He continued on to sing the praises of students, staff and a supportive school board by stating, “In general, the students were well behaved, respectful and helpful and made managing my job so much easier. The school board has been so supportive of me as superintendent, they were in my court the whole time.”

After pausing for a moment Cortney continued by stating boldly, “The staff is the finest group of people that I could ever work alongside. I wish to thank each and every one of them for the work they did for the children and this community. I hope they continue to carry on my feelings for the needs of the children.”

Cortney’s journey as teacher and administrator culminates on June 30, 20018, his official last day before the new administration takes effect on July 1. Next on Cortney’s list, retirement and supporting his wife in her career as manager of the Blue Bell Lodge in Custer State Park. Part of that new journey involves the duo and their three grandchildren moving closer to Custer State Park and into a new home being built on their newly purchased plot of land by Pringle. Their new home, once completed at the end of summer, will reduce Cortney’s wife’s commute down to only 16 miles.

After they settle into their new home, Cortney intends to fully embrace his retirement by dusting off his old woodworking tools and dragging out the fishing poles to do woodwork art and cast away to his heart’s content.

Edgemont Superintendent of Schools Dave Cortney will officially retire from his post at the end of this month. Dave Cortney poses in front of a special peice of artwork created and gifted by the students at EHS. The "smoke" from the train is made up of student and staff thumbprints.