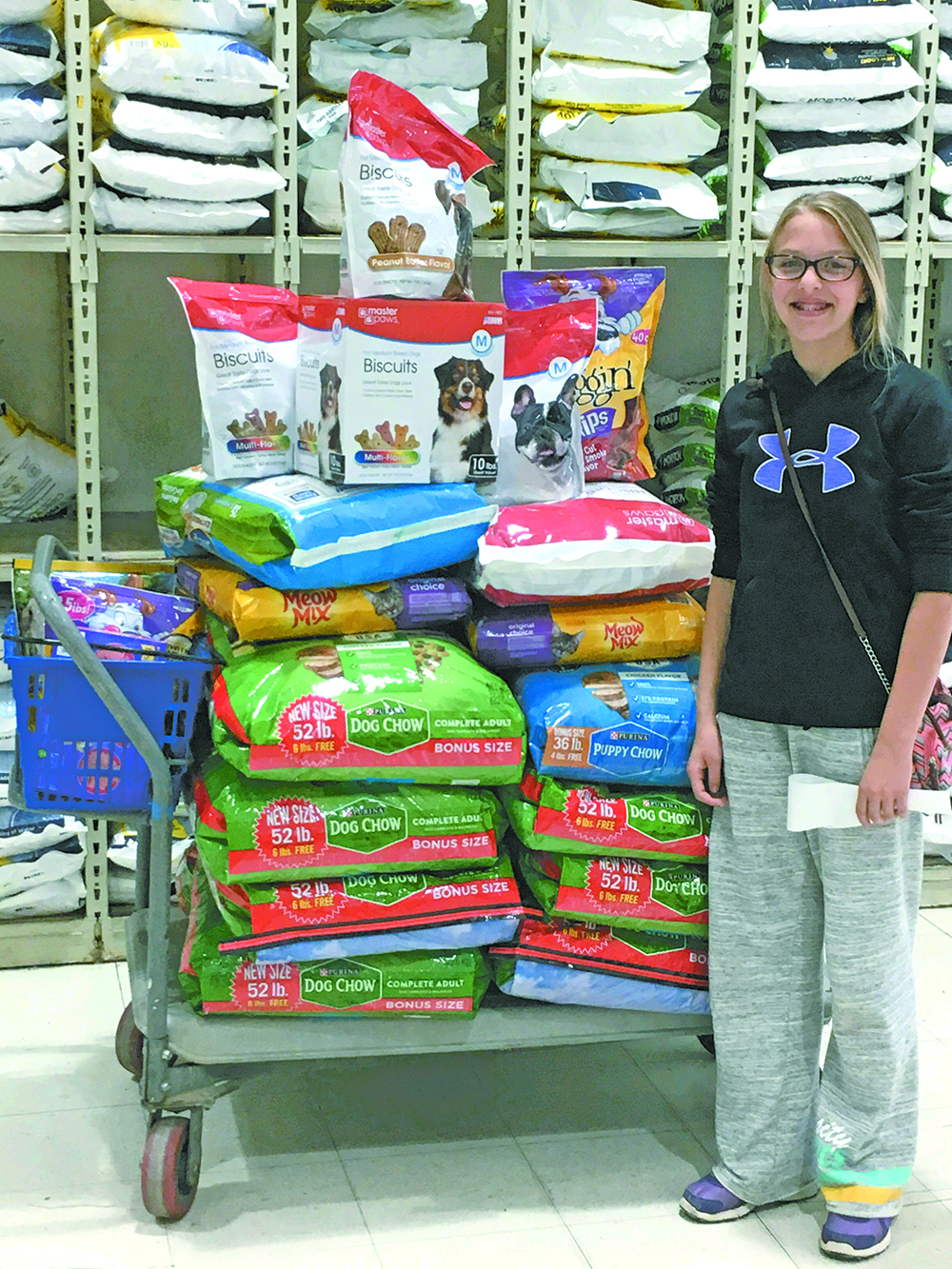 “My grandma needed to start exercising more. I thought if she had a dog, that would motivate her to walk,” said Eva, who lives in Selby, S.D

They began looking at shelters, and Eva discovered that BMHS is a no-kill animal shelter. She said, “At the time I didn’t understand what that meant exactly, but once I found out I was really mad about shelters having to kill animals because there wasn’t enough room and they couldn’t afford to feed them.” Eva said she spent the whole day crying about it. “It just broke my heart to realize what really happens to animals in some of the shelters,” she said. Although Knisely adopted a dog from a different shelter, BMHS became Eva’s go to charity.

As Eva wondered what she could do to help the no kill shelters, especially BMHS, she said, “I decided I could make and sell potholders like I did for the fifth grade business fair.”And the story begins, as Eva has turned a small home-made idea into what could be a cottage industry, for her, her family, and for BMHS and perhaps other no kill shelters.

“I started selling my potholders at my grandma’s rummage sales in Hot Springs,” she said, then progressed to hometown “Stop & Shop,” pop-up vendor fairs and her sales increased beyond her expectations. “Soon it was too much for me to keep up with,” she said, braces shining out from her beaming smile as she rolls on the floor with Tippi, a rescue dog. She enlisted the aid of her mother, Kim, and they started working together. “She would help me cut and pin, and I would sew them,” Eva said, “It really helped things go faster!”

While she began with simple, yet artistic, square potholders that anyone would be proud to use in their kitchen, she added to her inventory by making dog, cat, and horse treats, and coasters as well. “I have made five donations so far,” said Eva, “And have donated approximately sixteen hundred dollars ($1,600!) in supplies, including dog and cat food, blankets, beds, cat litter, toys, gas cards, and gift cards,” she said.

“I think I really did surprise her (Michelle Brock, BMHS manager) with my first donation,” Eva said, noting the donated items completely filled the back of her mom’s and grandma’s SUVs. Kim said that when Eva has enough money to purchase supplies, they make the five-hour trek from Selby to Hot Springs, stopping in Rapid City to fill up with supplies from Menard’s. “One of the best parts for me is to be able to pick everything out,” said Eva. “She typically shops at Menard’s during their 11% rebate sale, and uses the rebates as seed money for future donations,” said Kim.

Eva’s next venture is making dog toys, which is a work in progress. “We’re working on the prototype,” said Kim.

All of Eva’s potholders have denim backing, are well padded, and sell for only three dollars each. She has begun including small utensils such as whisks and spatulas tucked into the potholders, which sell for five dollars each. Soon the dog toys will be for sale as well. “At Christmas I had a lady who bought 10 sets of potholders and included them in gift baskets for her family and friends,” said Eva, excited about the possibilities of more sales. “Sales are slow right now,” said Kim, but Eva hopes to remedy that by keeping up with inventory so she has plenty to sell during summer rummage sales.

In the meantime, Eva will tirelessly continue on her quest to save the animals.

Eva Hannan, of Selby, has found a way to help the local Battle Mountain Humane Society, despite living more than 300 miles away from Hot Springs.