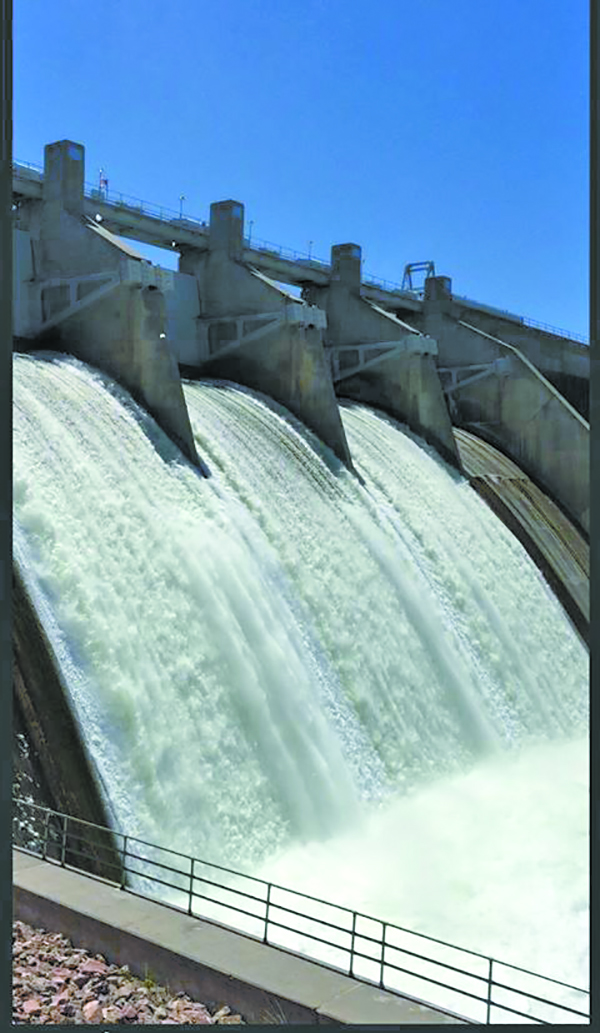 ORAL – Anyone who lives by or has traveled near the Cheyenne River on the downstream side of Angostura Reservoir in the past week knows its been ‘a roarin’ lately. And no doubt, you’ve probably also figured out that the reason for that is due to the Angostura dam gates being opened up to allow space for more inflow from the three waterways which fill the lake – the Cheyenne River along with Horsehead Creek and Hat Creek.

Angostura Reservoir is considered “full” when the pool elevation is 3,186.0 feet, and the based on information found at www.usbr.gov, the lake has been at or around that level for at least the past 30 days. As of Monday, June 4, the lake was considered 95.6 percent full.

According to Angostura Irrigation District Manager Mick Jenniges, water from Angostura filled the irrigation canals for the first time this year on May 14, after receiving water demands from customers within the irrigation district of 30-feet. He said they typically wait to open the canals until there are 50-feet of orders, but due to expected inflows of water on their way to the reservoir from the three aforementioned waterways, Jenniges said they went ahead and began to release some water to take some pressure off. 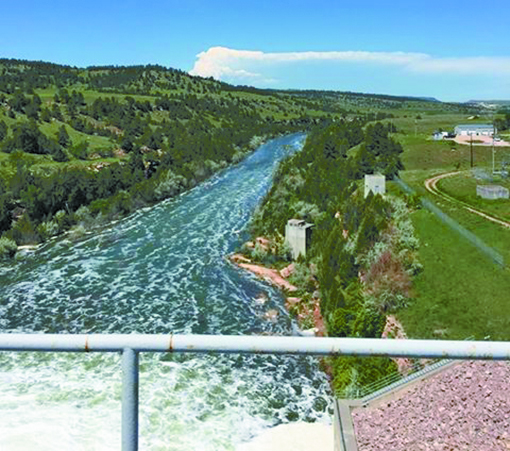 With the irrigation canals open, expected water inflows continued to rise due to above-average precipitation and run-off from throughout the area. So on May 18, for the first time this year, Jenniges said they partially opened one of the five 30-feet x 50-feet gates on the dam. With this gate open – only a few inches – 580 cfs was being released from the reservoir at that time, he said, with the goal of the combined outflow of the dam and the canals together to match that of the inflow, at the very minimum, to avoid overfilling the reservoir.

Last Wednesday, on May 30, expected inflows were going to surge, so Jenniges said Gates 2, 3 and 4 were opened, which allowed 4,570 cfs of water to rush out of the reservoir and into the Cheyenne River downstream. Those three gates remained opened – again, each of them only a few inches – until this past Saturday, June 2, until two of the gates were closed again.

As of Monday, June 4, with only one gate open, Jenniges said they were releasing 750 cfs out of the dam.

Jenniges said precipitation conditions in Wyoming have a great deal to do with what happens at Angostura, as both the Cheyenne River and Hat Creek bring water from there to the reservoir. As those conditions continue to be monitored – as well as our own here in Fall River County as the demand for irrigation water changes as well – you can be sure to see fluctuating water levels downstream of Angostura continue to change throughout the upcoming summer months.

INTRO PHOTO: With three of Angostura’s five dam gates open only a matter of a few inches each, more than 4,000 cfs of water is released downstream into the Cheyenne River, as shown here in this photo taken last week.

IN LINE PHOTO: As viewed from the dam itself, the Cheyenne River flows unusually wide as the released water from Angostura begins its trek downstream where it will soon meet up with water from Fall River, near the bridge on Hwy. 18/385, southeast of Hot Springs.