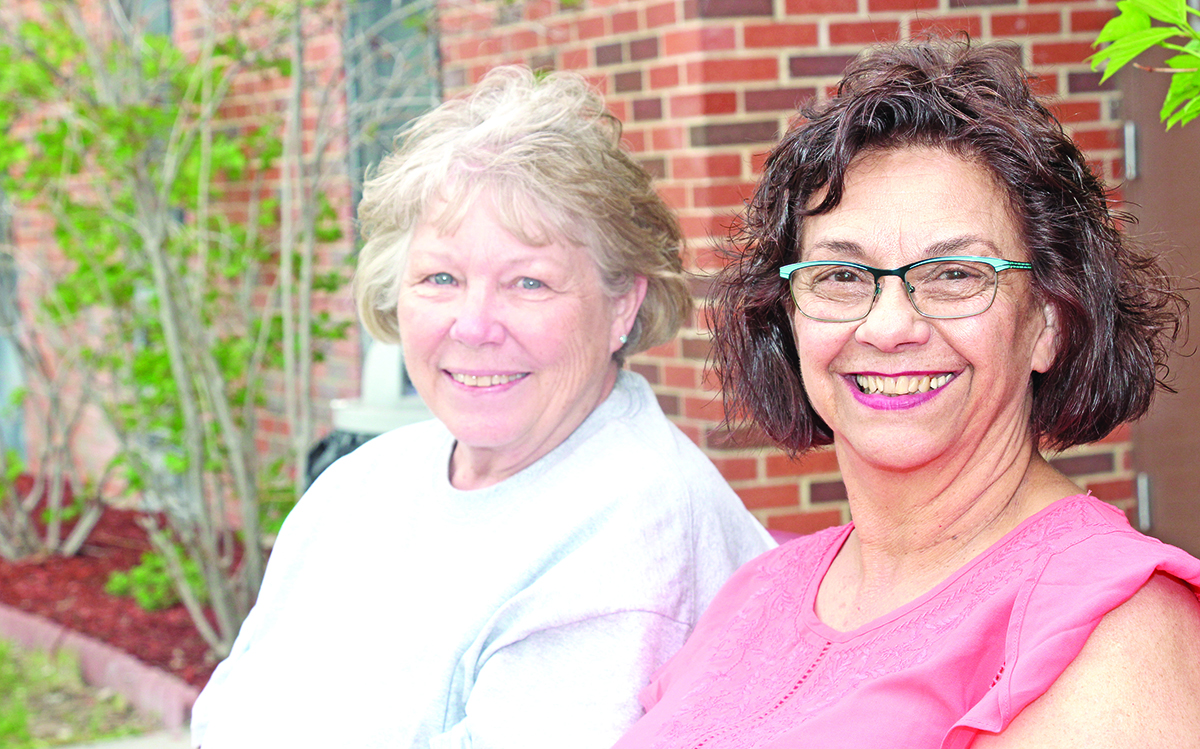 EDGEMONT - Two long and fulfilling educational journeys came to a close last week for two teachers at the Edgemont School District. With bittersweet goodbyes, Kathi Nelsen and Carol Harding both celebrated their last week of school before entering into their much deserved retirements. With the retirement of Nelsen and Harding, the school will be losing out on a culmination of 78 years of teaching experience.

Kathi Nelsen, a 1975 graduate from Chadron State College with a degree in Physical Education and a minor in Science, finished her teaching career as the current Junior High Science and Math teacher. Nelsen had also taken on an additional Algebra One teacher for one high school class in addition to her Junior High students.

Nelsen began her epic journey in teaching in 1975 as a teaching in Oelrichs, SD for seven years before being hired to the Edgemont School District in 1982 where she taught for the next 36 years. While at Edgemont, Nelsen began as the Physical Education and 7th Grade math teacher. According to Nelsen, when the school system switched over to adopt the “Middle School Concept”, adding the 6th, 7th, and 8th grade years as Middle School (now referred to as Junior High), Nelsen and a handful of other teachers went back to their own education and acquired a Middle School endorsement to be able to teach those grade levels.

After Nelsen acquired her new Middle School endorsement certificate, she began teaching Middle School Science and Math. In a recent interview, when asked what her favorite classes to teach were, Nelsen pondered before stating, “I really enjoyed the middle school kids, when the concept you are teaching hits them, they just light up!”

Additionally, Nelsen reminisced about her favorite memories with those same middle schoolers. After being asked to recall her most beloved memory she took a few moments to consider her 36 years at Edgemont High School. Will tear-filled eyes Nelsen began to recall her favorite moments, “The upper middle school classes sometimes tended to pull little ‘end of the school year pranks’ or gifted her with random acts of kindness.” One of those random acts of kindness was a vase full of tulips that sat on her desk during her last couple days teaching.

“One year, at the end of the school year, when I walked into my classroom all of the desks had been removed from the room and instead the students had placed a couch in my classroom and made the room to look like a lounge,” Nelsen smiled as she recalled some of her fondest memories.

After 36 years at Edgemont and with a total of 43 years of teaching under her belt, perhaps her most treasured memory can’t be summed up into one or two small interactions with students. “Really, I treasure all the interactions with the kids in this community and at community events,” Nelson continued as she fought back tears, “We just have such good kids here, I really mean that.”

Although Nelsen continued to interact with students that had “graduated” from middle school and entered into their final four years of high school, one of the enjoyable parts about teaching those students came from witnessing their own personal growth through their middle school years. “To watch as sixth graders come in and mature to their eighth grade selves is remarkable to witness,” Nelsen stated. She expanded on the sentiment by saying, “As I watch their maturity progress, I get to this moment where I go… ‘Okay, you’ve outgrown me and you’re ready to go upstairs’ (to high school).”

If Nelsen had to leave her students and parents with one thought, it would be her philosophy on the position of a teacher. “Teachers merely bridge the gap between what parents have taught their children and how they have shaped them.” Nelsen went on to explain her belief that learning starts at home with the parents being the first line of defense in education. The teachers are there to facilitate and expand on the values and lessons that children bring to the classroom.

Carol Harding, fellow teacher and retiree bringing an additional 35 years of teaching experience to the table, also shared in the bittersweet goodbyes last week as she too, closed her classroom door for the last time. Harding has had quite the teaching journey and has had the opportunity to teach in many different classrooms and subjects.

Harding started her education as a high school graduate in Newell, SD in 1968. From Newell, she made her way to Springfield, Mo. where she graduated from Evangel College - Springfield in 1973 with a Bachelors of Science in Elementary Education. In the state of South Dakota, Elementary Education degrees allowed teachers to instruct all classes from Kindergarten through Eighth Grade.

Harding entered her first classroom to teach in 1973 for the Oelrichs School District teaching at their country school, Pettigrew. Harding taught there for one school year before coming to Edgemont as a Third grade teacher in 1974, thus starting her teaching saga for the Edgemont School District.

From 1974 to 1978, Harding taught the Third grade and in the Spring of 1978 took some time off to welcome her first child. She returned as the Second grade teacher in the middle of the 1981 school year to help fill an empty teaching position and stayed until the birth of her 2nd child in 1983. Harding repeated that same scenario when she returned to fill in for a position in the middle of 1984 and found herself with the third graders once again until the birth of her third child in 1987.

After her time away in 1987, Harding stayed home until all three of her children were in Kindergarten and then returned to school to teach the Gifted Program from 1994-2000. After six years of teaching the Gifted Program, Harding found herself filling several more needs and positions at Edgemont School District from dual roles as First grade and Gifted Teacher in 2001 to the Kindergarten teacher from 2001-2004. After switching several positions to fill the needs of the school, Harding was finally able to settle into a classroom for a long thirteen year journey as the Title I Teacher until 2017.

In her final year teaching for the 2017-2018 school year, Harding put on yet another new hat for the last time and closed out her teaching career as the English, Language, Arts and Title I teacher for sixth through eighth grade. In her resignation letter to the school board and in an interview last week, it was important to Harding to convey that her presence will still be strong in the community. She stated, “It has been quite a journey during my 35 years in the school system.”

“I may be retiring from the classroom but I will still be involved with the school activities and will be present in the community,” Harding added.

When asked in an interview what Harding’s favorite position was, she responded by saying, “I loved Kindergarten and was sad to leave it. I also enjoyed working with the middle school kids and am thankful for the year that I got to experience that, I wouldn’t have known that otherwise.” Harding said she enjoyed this last year with the middle schoolers but was looking forward to her retirement, “I liked it, but not enough to stay another year!”

In her 36 years of teaching, Harding was able to experience the beginnings of the Edgemont School System switching over their curriculum style to the Mass Customized Learning concept. She noted that for her, “In many ways, it wasn’t much different than the Elementary years for me. In many ways, you are always individualizing and customizing your approach to the student’s different learning styles.” One important point that Harding wanted to convey to parents is that contrary to some perspectives, Mass Customized Learning (MCL) does not mean kid are just on their computers, in front of their computer screens teaching themselves.

According to teachers and Administrators Amy Ferley and Lane Ostenson, MCL is a customized approach to meet students where they are and will continually change as the needs of students change, but doesn’t mean that students take on the role as teacher. Instead, teachers adapt their teaching to the learning styles that best serve each individual student’s needs in a way that will enhance the learning experience for that child.

When asked what her philosophy was as a teacher Harding responded, “Just turn in your homework!” She chuckled and then got back to business by stating again, “Zeros are unacceptable for me. Just do your homework and turn it in. We wouldn’t have issues with grades if the work is just completed and turned in for grading.” When Harding reminisced about her teaching career, she expressed her bewilderment when students would fail to do their homework and how some brushed it off so easily. However, no matter what she kept on trying to instill that lesson in her students, show up and do the work.

So, what’s next for Nelsen and Harding? For starters, Nelsen is looking forward to ignoring the 6 a.m. alarm that has been ringing in her ear every weekday for the past 43 years! As for Harding, a self-proclaimed morning person that wakes up every day at 5 a.m., she is looking forward to grabbing a cup of hot coffee and just relaxing in the early morning hours of her day, with no obligations to be anywhere.

Aside from the morning routine, Nelsen isn’t quite sure what to do with her new found retirement. “I’ve been working since I was 16,” Nelsen exclaimed, “I don’t have a clue what’s next for me!” She did mention that her kids are spread across Maine, Colorado and Wyoming and that she will look forward to the flexibility of going and visiting them.

And as for Harding, she is excited to be able to make it to all of her grandkids’ activities in Edgemont and plans to attend as many sporting events and school functions as possible. Harding is also looking forward to all the extra cuddles she will get from visiting her grand babies in Rapid City as often as possible now that she has no obligation during the week.

Although both Nelsen and Harding conveyed their excitement for retirement, one thing remained clear throughout the interview with them both… they have an obvious passion for teaching children and will deeply miss the smiling faces rushing through the classroom doors to great them.

-Look for a special feature story on retiring Edgemont Superintendent Dave Cortney in next week’s edition!-