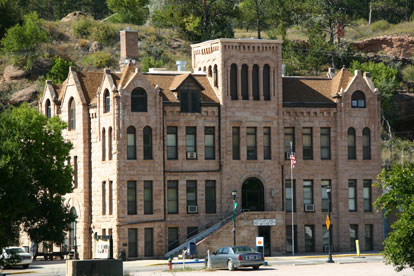 HOT SPRINGS – Despite a desire by some of its members to invest the county’s reserve funds with local financial institutions, the Fall River County Commission unanimously approved the recommendation by County Treasurer Kelli Rhoe to keep half of its now $2 million investment in an ICS (Insured Cash Sweep) account at First National Bank in Lead, but take the other half and invest it in Treasuries with Charles Schwab.

Rhoe’s recommendation at last week’s regular county meeting on May 15 was by request from the commissioners following a discussion about investments at the April 3 regular meeting. During that discussion, which included comments from representatives with First Interstate Bank and Bank of the West – both of Hot Springs – as well as from First National Bank in Lead, the commissioners voted to make their future investment decisions based on the recommendation of the county treasurer. At that time, Rhoe said it was her desire to keep the county’s investments local, but she would investigate their various options and then come back to the commission with a more educated recommendation.

In her written recommendation to the commission last week, Rhoe pointed out the county’s investment policy, which sets the “primary objectives, in priority order being: a) Safety; b) Liquidity; and, c) Return.”

“As your county Treasurer, I must put the interest of the taxpayers first,” Rhoe stated in her report.

With that in mind, she offered her recommendations which included charts comparing the various options and their return on investment.

“Currently we have $2 million in an ICS account making 1.25 percent interest or $25,000 in interest income per year,” her report stated. “Compared to oru local MMF (Money Market Fund) and CD (Certificate of Deposit) interest rates, this is the best option. Keeping an open mind, I studied the options to bring some money back to Hot Springs banks. The best option, to work under that constraint, would be to invest in CDs. I don’t feel this works well with our policy.”

“I then looked into Treasuries. Treasuries are safe for counties to use, they are easily liquidated, and they have the best return,” Rhoe reported.

“As a compromise, my recommendation would be to keep $1 million in the ICS account at First National Bank in Lead. Take $1 million and put into a 36-month Treasury Deposit. With an interest rate of 2.69 percent, we will gain an additional $14,400 in interest income per year,” reported Rhoe.

After reading and hearing her report, both Commission Joe Allen and Joe Falkenburg thanked her for her diligence in coming up with the report, but at the same time, expressed their disappointment with her not recommending to invest the money with the local banks of the county.

“I do agree with the idea of a more local standpoint,” Rhoe said. “But when I look at the numbers, I have to disagree.”

The commissions then voted unanimously to approve her recommendation.

Later in the meeting during Public Comment, during a brief discussion regarding the Chilson Bridge, Commission Chair Joe Falkenburg reported that a meeting is set for Thursday, June 7, with state officials at the Fall River County Courthouse, to answer any and all questions regarding how the county and state will move forward with plans to address the issue. Recently, the county and state had signed a Work Order to begin work to build an at-grade crossing through where the now condemned bridge stands on Old Highway 18. However, it was reported earlier this month in the Fall River County Herald, that the commissioners were now reconsidering that decisions and potentially looking at building a bridge instead.

Falkenburg stated during the meeting that they had from the lawyers of a nearby landowner, the Murdoch’s, that they would fight the eminent domain needed by the state to build the at-grade crossing.

Also during Public Comment, Commissioner Paul Nabholz said he is seeking public input in regarding his efforts into making it possible for county employees to carry concealed weapons while in the courthouse.

“I am a big believer in the Second Amendment rights and that gun-free zones attract fanatics that want to kill law abiding people that are prohibited from protecting themselves,” Nabholz said. “While I would like to have both county employees and the public able to carry arms in the courthouse, the last time I attempted that the judge shut down court.

“While the public doesn’t spend a lot of their time at the courthouse, our employees do and are prohibited by law from protecting themselves. I would propose that we ask the judge if he would accept allowing state and county employees with South Dakota issued carry permits to carry guns in the courthouse.”

In other business, the County Commissioners:

During Emergency Manager Frank Maynard’s report, heard that county emergency personnel responded five incidents thus far in May, including a grass fire on South Dewey Road along BNSF tracks on May 2, as well as three other fire incidents relating to railway tie fires on May 5, 8 and 9. There was also a fatality auto accident on May 6 on Hwy. 18.

Tabled approving the Fall River Consolidated Board of Equalization Minutes from the April 17 pending advice from States Attorney (SA) Jim Sword, due to board taking action following a potential invalid motion made by one of its members during the meeting.

During Building Supervisor Lyle Jensen’s report, voted down a proposal to spend $10,000 - $15,000 to improve the air conditioning system in the courtroom and SA’s office, but approve a firewall quote from GoldenWest for the Highway Shop ($2,368.85) and a fire alarm control panel from Amick Sound, Inc., for the jail ($1,810.00). By a 3-2 split vote (Nabholz and Allen dissenting), the commission also gave the OK to Jensen for him to begin advertising for a full-time maintenance position.

Heard concerns from various meeting attendees regarding poor gravel road conditions recently in the Buffalo Gap area. Some had even reported getting stuck.