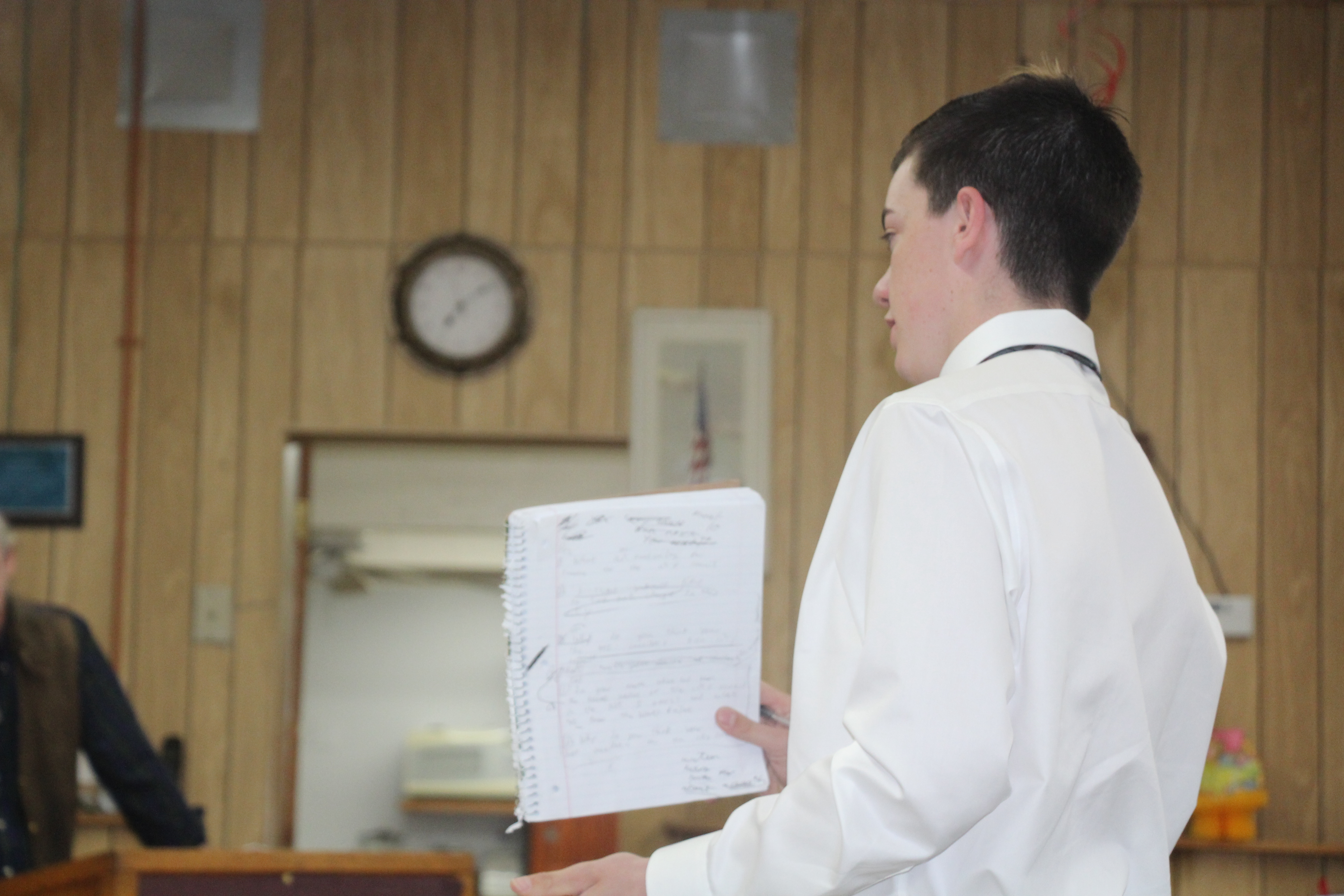 EDGEMONT - Walk into any Edgemont City Council meeting and you won’t find many high school students in attendance, actually none, except for Nate Leonard.

Leonard, a 15-year-old about to wrap up his freshman year at Edgemont High School is at nearly every meeting unless there are extenuating circumstances that prevent his attendance. Based on the average attendance at City Council meetings, Leonard’s dedication to the politics of Edgemont rivals most adults and his passion for learning more about city government is sending him on his way to Los Angeles to the National League of Cities, City Summit.

Leonard was first inspired to start going to meetings in November 2016 when the law enforcement contract with the county was under heated debate in Edgemont and across the county. Leonard recalls, “it was a big deal so I wanted to go to the City Council meeting and learn more about the contract. Going to the meeting answered a lot of questions for me, but it also left me with even more questions.”

Going into his third year of attending meetings, Leonard had been taken under the wing and mentorship of former Edgemont Mayor and Councilman Carl Shaw. With Shaw’s encouragement and Leonard’s growing interest in city politics, Leonard attended the District 9 Municipal Meeting in Wall this past year.

According to Leonard, nothing particularly interesting stood out at the meeting but it did provide a great learning experience. Leonard’s take away from the meeting culminated in this statement, “It was a great learning experience but I think more council members from our community should go, aside from the ones already in attendance.” He continued, “I learned more in-depth of how a council and the district works together.”

At the District 9 Meeting in Wall, Leonard crossed paths with the Head of Municipal League of S.D., Yvonne Taylor. It was Taylor that encouraged and pushed Leonard to seek out more municipal events and meetings so that he could learn more aspects of city government on many different levels. Leonard recapped Taylor’s words of encouragement when she told him, “it was really great to see young people interested in government.”

After the encounter with Taylor, Leonard started looking into the Municipal League meetings across the country and was immediately drawn to the City Summit event held in Los Angeles, Calif., later this year, Nov. 7-10, 2018.

According to their official website www.citysummit.nlc.org, the City Summit is best described as, “the National League of Cities’ conference for local leaders to convene and collaborate on solutions to the common challenges facing America’s cities. Each year, the conference is hosted in a different U.S. city – offering fresh and new best practices for government officials to improve the conditions back home.”

Due to Leonard’s age, he is allowed a substantial registration discount as a “Youth Delegate,” and was officially named, in April, by the Edgemont City Council as the Youth Delegate of Edgemont for the City Summit event in Los Angeles this upcoming November.

All of the formalities are in place for Leonard, but now he is faced with a new difficult challenge - raising enough funds to attend the event. Leonard has been busy brainstorming ideas for town fundraising events as well as talking to sponsors that might help him pay his way. Some of the fundraisers Leonard has been tossing around could be combined into a town carnival event that has the potential to draw additional guests to town. These events include: a spaghetti or taco feed, $1 Rummage sale, t-shirt sales, a car smash, dunk tank, pie smash your teacher, raffle, bags tournament and a hot dog stand.

In addition to fundraising events, Leonard has also started a “Go Fund Me” page on the web that can be circulated on social media. While the Go Fund Me page isn’t his primary avenue to raising funds, it has proven to be a valuable tool in fundraising efforts for many different causes.

Leonard tries to be as transparent as possible when it comes to the costs of the event and has broken down the costs on his go fund me page. Summarized, the overall cost for Leonard and his chaperone, mother Stacie Harter, to attend this event includes roundtrip airfare, transportation, hotel stay for five nights, meals for two and the conference fee. These costs, researched by Leonard based on the actual dates of the event, come to a grand total of $4,598. Due to the anticipated rise in costs as the event draws closer, Leonard’s goal is to raise $5,000 for the event.

In an effort to support the city of Edgemont even further, Leonard states, “I have decided that any excess funds I raise that exceed my expenses will be donated to the Edgemont Volunteer Fire Department for any financial needs they may have.”

With all of Leonard’s interest in government and politics, he plans on joining the US Air Force following high school graduation and hopes to be an Air Force Firefighter. After his first few years in the service, Leonard’s goal is to attend school for a fire-science degree and if all goes well, he plans to climb the ranks of the military and incorporate his love for government and politics.

If you wish to support Leonard in his quest for City Summit, please visit his fundraising page at www.gofundme.com/SendNateToCitySummit or contact him for any additional information or questions.

Full Article Photo:
Taken by Amber Schumacher
Nate Leonard addressing the Ward II Candidates at the Election Forum held in April at the Edgemont Senior Center. Leonard asked the candidates why each of them is the best man for the job.