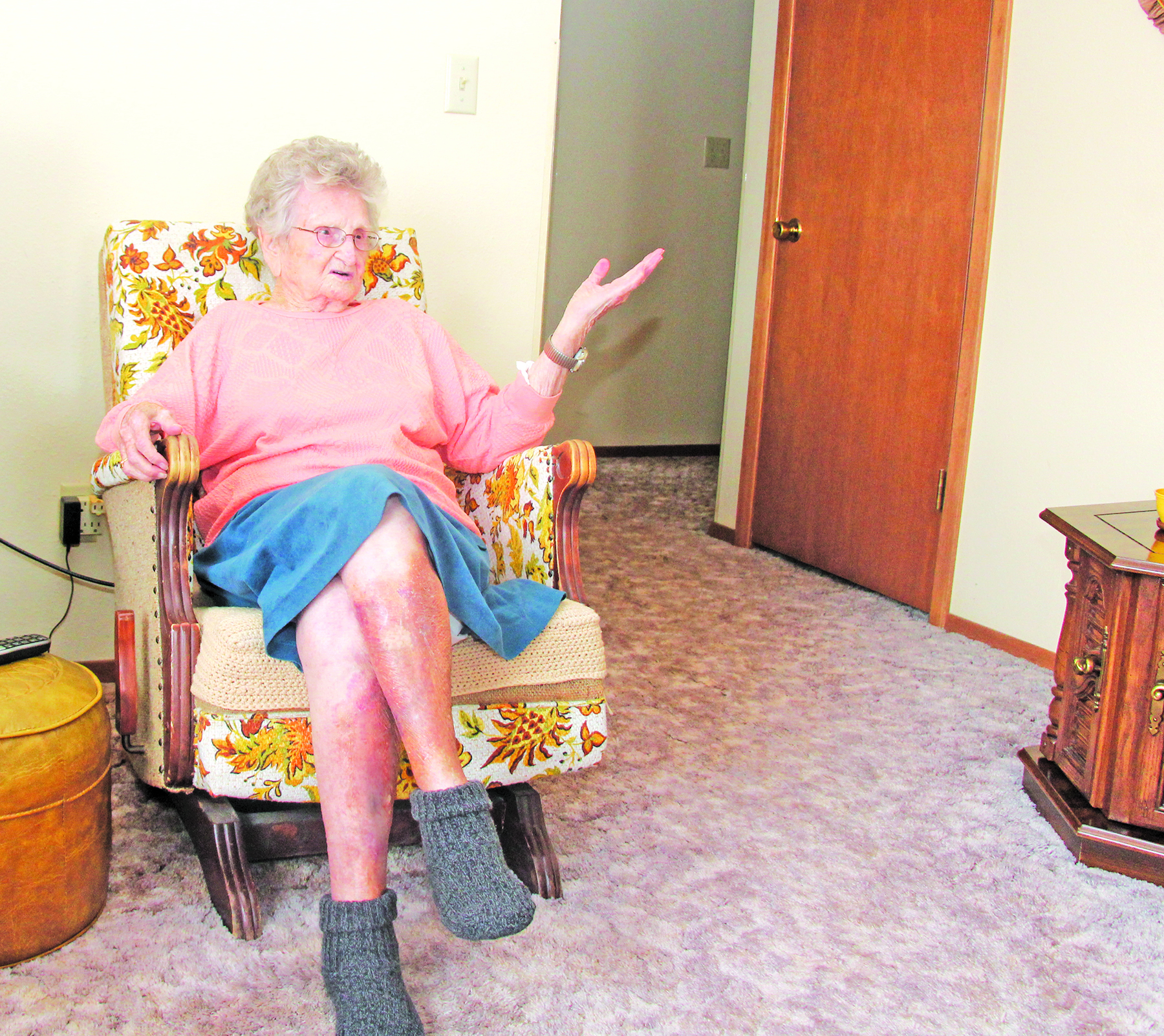 RED CANYON - It was 1914 and the start of World War I was making waves throughout communities both domestic and abroad. Many new inventions were being forged across the nation and the beginning of a new future was forming, especially so on a small farm in Red Canyon, South Dakota, a few miles outside of Edgemont.

On March 29, 1914, Caroline Curl was brought into the world on her family’s farm in Red Canyon where she would grow up and eventually move into a yellow two story house on the outskirts of Edgemont. And now, 104 years later, Curl sits lively in her chair, recounting days of her youth, remembering the first time she heard the radio and spilling the beans on how she’s stayed so youthful in spirit and abilities.

In a recent interview to celebrate her 104th birthday, Curl revealed a few things that have surprised her the most and have left the biggest impressions upon her. Curl recalls the day her family gathered together to listen to the inauguration of President Hoover. The radio only recently made its debut into the world and Curl says she was astonished that you could tune into an event happening in Washington D.C. from the comfort of your family farm in rural South Dakota. Something else that has left a lasting mark on Curl was the ability to fly and the innovations and leaps forward with aircraft.

In relation to the invention of the radio, Curl referenced a bible verse that had stood out to her in her youth, “when the anti-Christ shows up, he will be able to talk to the whole world.” Curl had pondered this idea and added, “I thought, how will that even be possible?” Curl goes onto explain that she has seen this incredible progression from the radio where you could hear someone that wasn’t right before you, to the TV where you can see someone, to the internet where you can reach everyone, anywhere in the world, in seconds.

Perhaps one of the biggest events for Curl is wrapped up in a memory she shared with her father, which she fondly passed along in conversation. Curl remembers when she was 10 or 12 years old, standing outside with her father glancing up at a moon that had just peaked over the horizon, rising up to take its nocturnal place in the sky.

Her father casually said to her, “well, man is going to get to the moon someday.”

Curl recalls being bewildered by his statement and had responded to him, “How? It’s so high in the sky nobody will be able to reach it?” As she reminisced the moment, she smiled and stated she couldn’t’ imagine then how it would be possible and unfortunately her father passed away before he could see the first man on the moon, an actualization of his casual premonition.

Another innovation that has captured Curl’s amazement has been the continual re-invention of the automobile, a stark contrast from the horse drawn buggy she rode to school everyday in Red Canyon. Curl adds, “My generation has seen more innovation in the last 100 years than the 100 years that precedes it.”

But life for Curl hasn’t been all about the leaps and bounds forward she has witnessed, in her own recollection she has been comfortable growing up in a secluded country setting, enjoying the simple pleasures that accompany farm life. She also saw the effects of the Great Depression during the 1930’s and had to adapt alongside her family. When she was then old enough and met the love of her life, she made a promise to her parents that she would wait until 20 to be wed, and three days after her 20th birthday on April 1, she married her late husband Barney. Her and Barney were married for 58 1/2 years and would have celebrated their 84th wedding anniversary on April 1 of this year.

When asked if it bothered her to live all by herself since her late husband Barney passed away in the fall of 1992, leaving her a widow of almost 26 years, she says that growing up in Red Canyon taught her to be comfortable living without many neighbors. The neighbors she does have, says Curl, take good care of watching over her. But Curl does a great job of taking care of herself, keeping an impeccably clean home and navigating the stairs down to her laundry in the basement. During conversation with Curl you’d be hard-pressed to guess her age at all, or even that she was a day over 80.

Curl passed her days as a homemaker and full-time mom until her children went to school. She then became a book keeper for Edgemont Lumber until she retired in the 80s at the age of 68. Curl continued to keep busy and taught Sunday school at Assembly of God in Edgemont for over 50 years and also helped out with their book keeping. Her children, John, 81, of Edgemont and Mary, 79, of Miles City, Mont., have given her six grandsons, one granddaughter, six great-grandsons, two great-grandaughters and two great-great grandsons.

When asked how she feels about being 104 years old Curl responded, “I didn’t feel it, but it really hit me like a ton of bricks when I was at my son’s 80th birthday celebration.” Curl continues to say, “All of a sudden I realized my son was an old man and I thought, what does that make me!?” Not many people get the privilege of seeing their own children grow to be old wise men and women themselves, but Curl happily enjoys this gift of time.

In the interview last week, Curl was asked what her ‘secret’ to longevity is and she smiled and rejoiced, “God has our time clocks wound-up and mine simply hasn’t run out yet.” She also added that she believes her way of life may have helped her stay healthy. “We grew up eating out of our own gardens and milking cows for fresh milk. We didn’t have frozen pizzas, soda pop, bags of chips and all those other things they have now.”  After a conversation about the joys of gardening Curl adds, “gardening your own food is one of the best joys, hardest and most rewarding work.”

Curl says she keeps her mind sharp by reading, compiling the Edgemont Centennial Book, stories of Red Canyon, crocheting and taking care of her home. When asked what innovation she has witnessed that she is least in favor of, she laments, “the abuse of the cell phone, how did I ever grow up without one?” She talked about how she has witnessed the cell phone cause children and adults to lose human interaction. “My grandchildren no longer perk up at my presence because they are lost in their little screens.”

The conversation with Curl moved from the living room towards the kitchen, once again as her agility showed no indication of her age, she talked about the meaning of life and finding joy in some of the hardest seasons of parenting, and how much beauty there is in raising children. She offered up wisdom to a fellow homemaker and shared tips she has learned throughout her century on this earth.