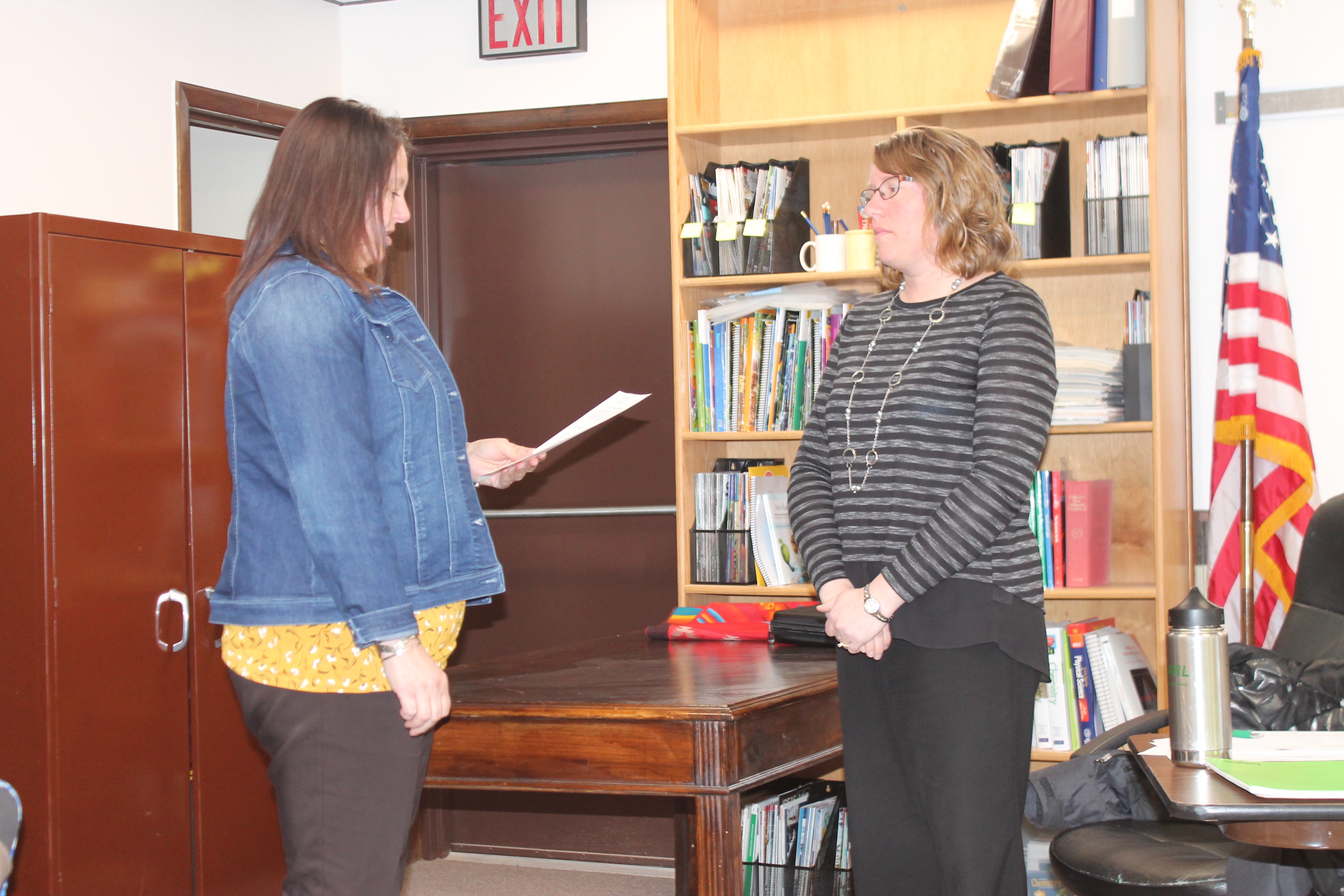 HOT SPRINGS - Kari Sanders took the oath of office to fill a vacated seat on the Hot Springs Board of Education at the beginning of the board meeting held on Monday, April 9. Sanders lives in rural Oral with her husband, Carl, and their three school-age children.

The Middle School Student Council reported on their extensive fund raising that is being used for numerous needs at the school and in the community, such as track and volleyball uniforms, the Ronald McDonald house, and the humane society, just to name a few. The Elementary Student Council reported that they are conducting a recycling program and collect aluminum and plastic items every Thursday.

Next on the agenda, Middle School science teacher Katie Brunson and four of her students presented the innovations they are creating in class as part of the prototype engineering class Brunson is conducting. “Engineering is new to this grade level,” she said. “Western Dakota Tech is impressed with what we are doing and wants to work with us.” Student Braden Grill demonstrated the machine he made that cuts off lambs’ tails. He explained that lambs have their tails cut off because they grow too long and can get stepped on or infected. Other projects demonstrated were a cord organizer, a butter stick and a tea bag with the tea and condiments all packaged together in a tea bag. The projects will be displayed on May 10 in Tays from 6 p.m. to 7:30 p.m. and will include demonstrations of the inventions. The public is welcome.

Board member Kim Henningsen gave a Black Hills Special Services committee report. He said the Technology in Education (T.I.E.) conference he attended emphasized a need for coding in computer science. Superintendent Kevin Coles said that the second grade is learning about coding. Henningsen also reported that Black Hills Special Services Career Learning program is helping prepare students to pass their GED High School Equivalency exam. The GED exam was changed in 2012 to be more challenging. In South Dakota 92 percent passed the GED while nationwide the percentage of students who passed was 79 percent.

The board voted to support having the Hot Springs soccer program set up as a Junior Varsity program next year. After the program was considered as one of the district’s potential budget cuts at the last meeting in March, board member Dustin Kleinsasser said he and others had met with the soccer association and the coach. He said the board’s main concern about continuing to support the program was based on participation numbers. The team currently has a number of younger players but not as many upper-classman.

With the school’s decision to support only a JV program next year, they will not be eligible for post-season play, but will still have a schedul of games versus other nearby schools. As only a JV program, there will be some financial savings to the district.

In other business, the board approved the Associated School Boards of South Dakota worker compensation renewal for the 2018-19 year and the premium payment of $25,692. Ollerich explained that a portion of that will come back to the district based on salaries.

The board voted to continue the Facilities Use Agreement with the City of Hot Springs. They also approved the South Dakota High School Activities Association 2018-19 membership, the school calendar, and the surplus tech equipment and refrigerator.

Administrators reports were next on the agenda. High School Principal Mary Weiss said the prom, which was held on April 13, was “wonderful.” She thanked parents who helped with the post prom party and said the kids told her they had a great time.

Weiss also reported that the Freshman Impact will be held at Crazy Horse, which is a program about the effects and results that can happen from drunk driving. She said counselors are present to help kids who may have had bad experiences or lost someone to a drunk driver.

Weiss said she was disappointed with the turn out of high school parents for this year’s Parent-Teacher conferences and would like to see more parents participate. The other building principals, John Fitzgerald and Liz Baker, however said turn-out in the elementary and middle school for conferences has been very successful.

The high school graduation is May 12.

A dance will be held on April 19 as a fund raiser to help with a student’s medical expenses.

The Elementary has a number of educational field trips planned. Parent volunteers are needed. The students participated in “Meet the Teacher” day to meet the teacher they will have next year. PTA needs officers. A PTA movie night will be held on April 19 at 6pm in the multipurpose room.

Business Manager Deb Ollerich talked about the equalization of revenues, which is part of the state funding formula. She said some schools get more revenue and some less. She said the Hot Springs School District was not affected by it this year, but could potentially see a significant hit to revenues in the future.

The board took a recess and then went into executive sessions for personnel, for legal counsel, and for negotiations. No official action was taken.

Hot Springs School Business Manager Deb Ollerich, left, swears in Kari Sanders of Oral as a new member of the school board after being appointed to the position when the previous member, Brandi Christianson, moved out of the district.