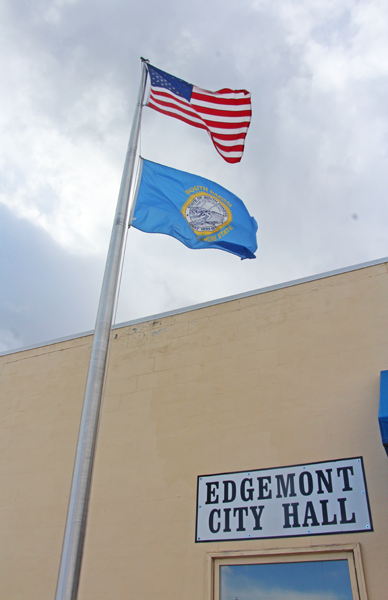 EDGEMONT — Early in the City Council’s meeting on March 20, officer Steve Yenulonis and council members discussed an ongoing issue with a small group of kids that keep finding their way up onto the roof of the city building. The council members are concerned about safety for the kids and the dangerous precedence they may set for other kids. According to Officer Yenulonis, he will continue to monitor the situation and hopes to catch the kids ‘in the act’, sooner than later.

Councilwoman Barb Strozewski even suggested that Officer Yenulonis make a trip to the school to re-iterate the danger to the students and to encourage them to “stay off the city building!”

Mayor Jerry Dibble and councilman Carl Shaw both had completed safety training with the WRA crew at the new water treatment facility in Edgemont. Dibble and Shaw both reported to the council their training covered how to handle the situation in the event of a rupture. Shaw remarked, “we lock the door and call 911!” According to Shaw, the hypothetical event would cause an emergency “if there was a rupture that allowed ‘medium’ to come out. The medium captures any radioactive material. However, the vessels are made out of fiberglass and a poly material and is highly unlikely to cause an incident.”

In other news, Dibble was hoping to give a report to the council on the prospect of Dollar General coming to Edgemont. As of the meeting on March 20, Dibble and the property owner were still waiting to hear back from the engineers and the land acquisition team for Dollar General.

There was a very brief discussion on the topic after Strozewski raised a concern about kids crossing the highway to get cheap candy from the dollar store.

Councilman Jason Shook reminded Strozewski that he feels “that is a parenting concern, not a city concern.”

Dibble added to the conversation stating that “traffic will probably be a problem for everyone.”

During the new business section of the agenda, the council was awaiting a concrete bid from Barkers to pour a new concrete pad at the City’s lower shop. Shook had a strong opinion about the matter and was backed up by Shaw suggesting the city should put base course down instead of spending money on concrete.

Shook added that if the city isn’t doing mechanics down at the lower shop, then it isn’t really necessary. According to Shook, there are other places in town like the muddy mess of a road on G Street between Fifth and Sixth.

Shaw wrapped up the conversation by stating, “we have other places to spend money, I’m with Jason on this.” The council moved to strike the matter dead from lack of motion.

The meeting was then promptly adjourned at 7:15 p.m. after the council approved expenses to be paid for finance officer Karen Cain to attend Finance Officer’s School in Sioux Falls June 5 through June 8.