While the majority of attendees were from within two to three hours of Hot Springs, Anderson said some drove from as far as Pierre and Vermillion to attend. 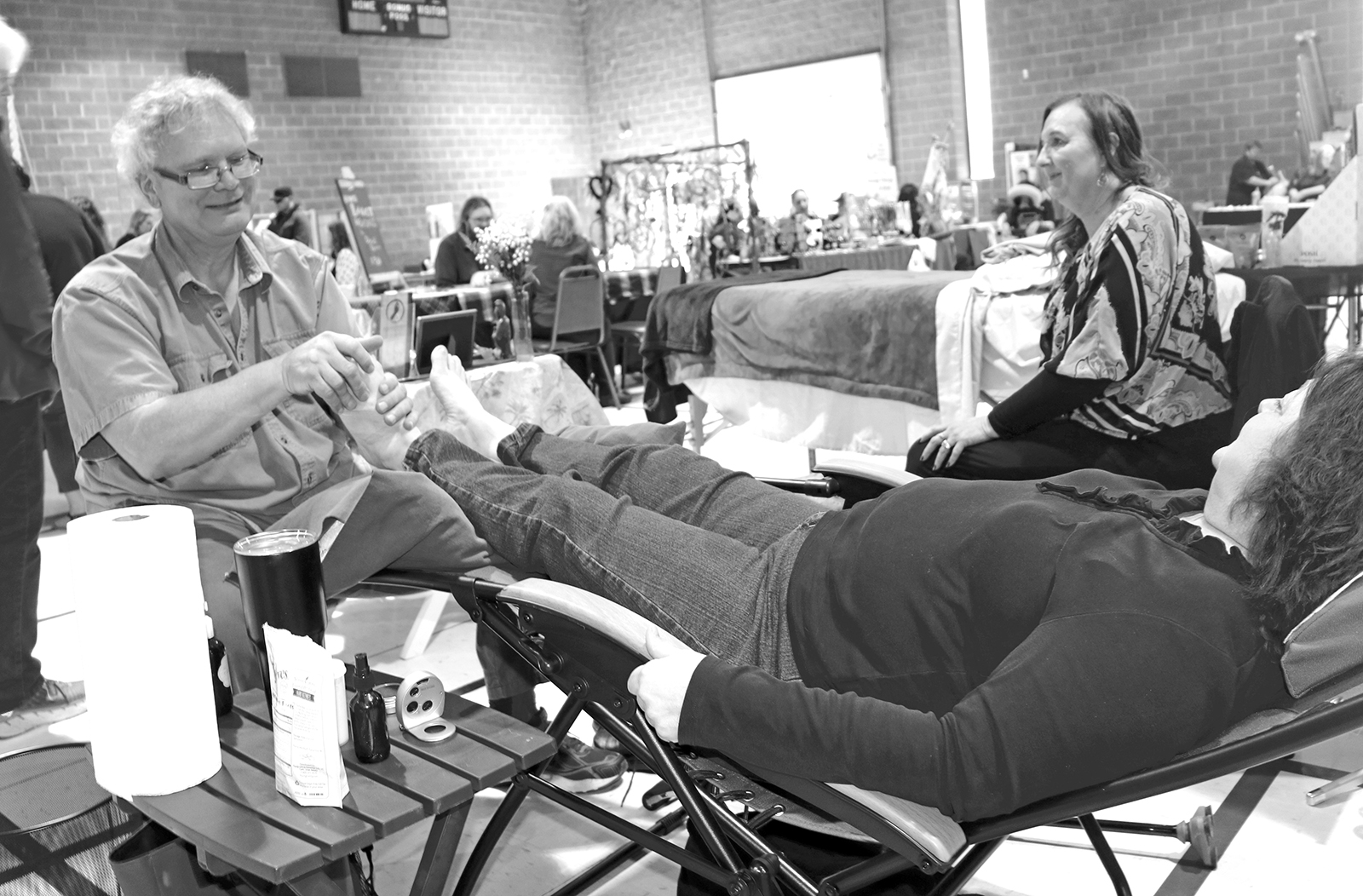 “This is the second year for the Southern Hills Holistic Fair and we were blessed with slightly higher attendance than last year. We had 57 vendors on hand providing mini-treatments, product samples, and sharing their information and knowledge with attendees,” said Anderson, who is a Hot Springs native now living in Rapid City where she works professionally as a Medium and Intuitive.

“Hot Springs has always been about healing – starting with the healing waters,” Anderson said. “There are a lot of holistic providers in the Southern Hills. By providing this fair, people from the region can come to Hot Springs and learn about all of the great services and products we have to offer. This is also a great place to come for a weekend. Stay overnight, shop in the stores, get a massage or treatment, play in the Plunge or visit The Mammoth Site. Hot Springs doesn’t shut down in the winter...they are open for business!”

“Feedback on the Fair has been very positive,” Anderson said. “People attending were able to learn of more services and products that might help them on their quest for total body, mind and spirit health.The fair is an open, safe environment for people to learn more about what might work for them.”

One of those vendors offering assistance was Andrea Potts from Rapid City, who has taken part in the Holistic Fair for two years now. Potts provides something very unique, which she calls Spirit Charms.

She began creating these very personal and meaningful pieces of art several years ago while helping a friend who was suffering from stressful, sleepness nights. Potts said after listening and talking to her friend, the conversation became very visual which inspired her to create something symbolic – in this case a piece of art crafted of wood from a pine tree – that she gave her friend and told her to put by her bed. This gesture in turn vastly helped her friend get the much-needed sleep she had been lacking.

It was with that experience, Potts realized she had something, even though to this day, she is unable to explain what it is, or why it does help people.

A very private person – who had trouble even talking about the gift she has to help people – Potts does not typically do fairs or events like the Southern Hills Holistic Fair, she said. But what she does do and enjoy doing, is talking to people.

An artist, a teacher, a musician and a leatherworker by trade, Potts said people have always seemed to be comfortable talking to her and sharing their feelings and troubles. While certainly not a licensed therapist or counselor, she acknowledges that perhaps that is a career choice she should have taken earlier in the life, while she described how strangers she sits next to in public places often just begin talking to her.

At her booth, people would sit next to her after selecting a charm from her table, most commonly made of wood or stone. They would then begin to tell her what is troubling them or describe a need they are trying to fulfill or something they are wanting protection from. From that conversation, Potts, who said she is a very visual person, begins to see symbols and images in her head which become representations of what is spoken. She then uses her artistic skills to paint those symbols and images onto the charm they selected.

Potts said people are surprisingly very candid and give her a mirror of themselves. She said they then get back what they share in the form of “Spirit Charm” which they can carry with them to help get themselves through whatever is troubling them, or whatever the case may be for that particular person.

“Its really just a conversation between two people,” Potts said. “I listen to what they need and then put that in a visual context and hand it to them.”

While Potts’ customers at the Holistic Fair would leave with something physical they could put in a pocket or a purse to take home with them to aid in their ‘mind, body and spirit,’ many others who attended the fair received their spiritual aids in the form of relaxed muscles or a realigned body.

Don Roberts LMT, CR, of Rapid City, with Body and Sole Massage & Reflexology was at his booth and helping his clients get their body back in balance through a form of foot and hand massage. Roberts said when one’s body gets “out of whack,” the practice of reflexology triggers points in the feet and hands which helps all of the organs in the body to become more in balance and work together to promote better overall health.

With another successful holistic event in Hot Springs this year, its very likely the community can expect this to be an annual draw to the Southern Hills for years to come.