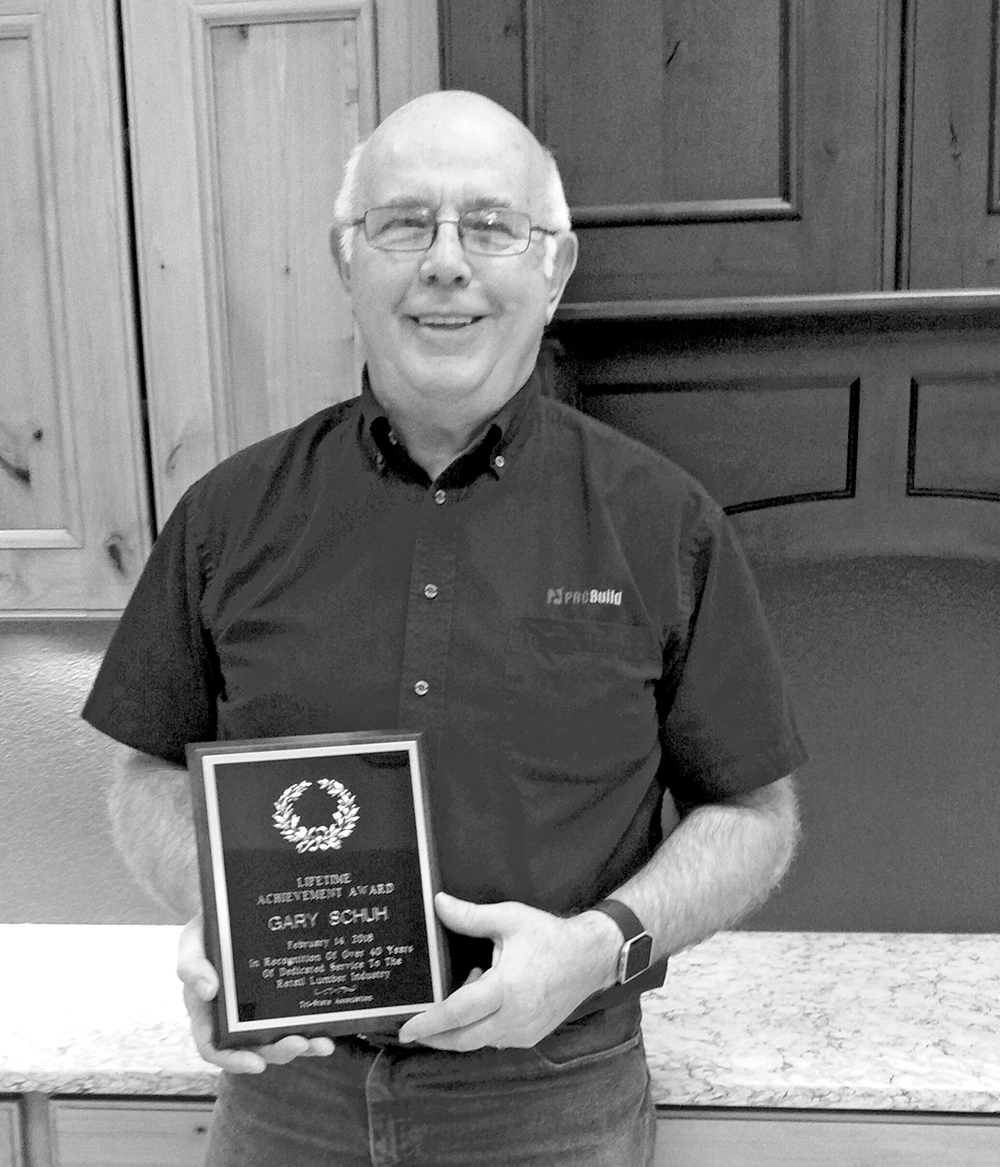 HOT SPRINGS – You can call them ‘building centers,’ ‘building supply businesses,’ or you can call them what they really are, and always have been, at least to Gary Schuh --  “Mom & pop places that are still called lumber yards and cater to the local community,” he said.

Schuh, of Hot Springs, recently celebrated 45 years in the lumber industry and was the recipient of a Lifetime Achievement Award at the 99th South Dakota Retail Lumberman’s Convention in Sioux Falls on this past Valentine’s Day, Feb. 14, 2017. The award is given to those who have 40 or more years of service in the state’s retail lumber trade. He was one of 17 honored at the convention earlier this month.

Since 1973, Schuh has worked in the industry, starting with Lampert’s Lumber in Spearfish. For the past 42 years he has called Hot Springs home, working first for Lampert’s in what is now the American Legion location. “Lampert’s closed in 1991,” he said, remembering that he left on April Fool’s Day.

Schuh met with a Minnesota businessman and together they began Great Plains Supply, which celebrated its grand opening in August of 1991. Schuh has managed the lumber yard, in its myriad transitions, for most of his career.

He didn’t begin with lumber in mind, however, as he earned a BS degree in education from BHSU. “I student-taught in the fall of ’73 in Sturgis and was a substitute during the following spring semester,” he said.

Schuh was born and raised on a farm in Isabel, SD, and received his early education at McIntosh. It didn’t take him long to make the transition from teaching to lumberman. “The manager of Lampert’s in Spearfish called me and offered me the job,” he said, and the rest is history. A history filled with community service and a can-do attitude, in addition to the countless hours he tended to the store.

After Great Plains Supply moved out, it sold to United Building Centers (UBC), which sold to Pro Build, and now the business has morphed into Builders First Source. Schuh is no longer the manager and that is fine with him. He handles outside sales now, and works primarily with contractors. “I have a great boss here, Cody McKinstry, and Drue Schroeder, who went to school here with my daughter, is the three-store general manager,” he said. In addition to Hot Springs, there are locations in Rapid City and Spearfish. “The three stores are basically one, and we all work together,” he said.

Schuh met his wife, Patty, at the old city auditorium at a fireman’s ball. “There was an auditorium in what is now the empty lot across from the courthouse,” he said. Patty was an elementary PE teacher. “She is celebrating her 40th year and will retire this year from teaching,” he said. They have two grown children, Bethany and Josh, and three granddaughters.

Schuh has a strong sense of community and giving back is important to him, as evidenced by the number of awards lining his office walls, including Citizen of the Year and Businessman of the Year, and a “Gary Schuh Day” proclamation signed by the mayor in 1991.

He modestly addressed the improvement efforts he has spearheaded, often with the help of his fellow Rotarians. Through the Rotary Club, of which he’s been a member since its charter, picnic shelters, restrooms, and playgrounds have been installed in parks and schools. “We even installed a restroom behind the Mueller Center, calling it the potty on the path. We lined up the community band and had a ribbon cutting for it, and a drone with toilet paper hanging from it provided the flyover,” he said with a chuckle. That project was completed in May of 2016.

When asked about the countless hours of community service he has provided, through Rotary, the Chamber, and many other organizations, he said, “You’ve got X amount of years of active life when you can go out and do things, and you just go out and git ‘er done. Then, you’ll reach an age when you kinda want to sit back and enjoy the fruits of your labors.”

When Schuh retires, he looks forward to more golfing, and gardening. For the past eight years, he and Patty have worked at the Joe Allen Ranch, planting and tending pumpkins for the annual fall pumpkin patch. He’ll still have that git ’er done mentality, even in retirement.

Gary Schuh celebrates 45 years in the building industry with a Lifetime Achievement Award he received at the South Dakota Retail Lumberman’s Convention in Sioux Falls.