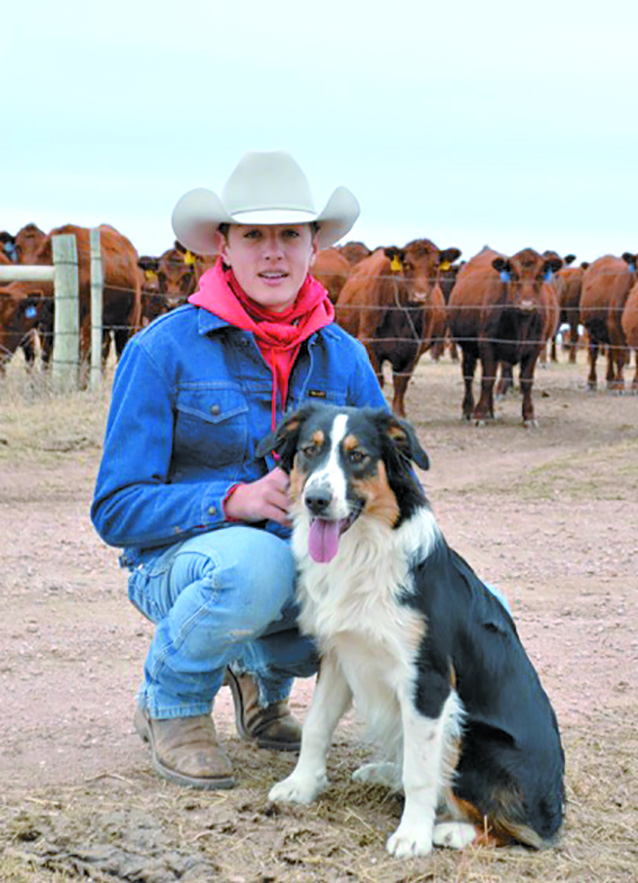 HOT SPRINGS - At only 14-years-old, Hot Springs eighth grader Braden Grill stands just over 6-feet tall and boasts a bright smile and a firm handshake. Grill, son of  Brad and Trixie Grill, has a lot going on in life outside the everyday musings of a teenager about to embark on the last four years of school.

Grill just turned 14 on Jan. 2 and already has his sights set on a future in the military. Since he was 10-years-old, Grill had it in his mind that he was going to go into the military to serve his country. He has known for the past four years that he would choose the Navy once he graduated high school. When asked what division of the Navy he wanted to focus on, without hesitation Grill said he would be excited to serve in the submarine division and is confident that his 6-foot, 1-inch stature isn’t too tall to work in radar detection.

Although Grill had already made up his mind about the Navy, hearing stories from his great grandfather Pete Cymbaluc solidified his passion for military service. Cymbaluc served in World War II as a Navy cook and loved regaling Grill with stories of his time in the service. Grill has also taken the time to visit with World War II vets living at the State Home in Hot Springs. A combination of family stories, veteran stories and his own driving passion has encouraged Grill to pursue his Navy dreams.

After serving in the Navy, Grill plans on using the GI Bill to attend Lake Area Tech in Watertown to complete a two-year diesel mechanic degree. Grill’s mother’s side of the family had attended Lake Area Tech in Watertown and the idea of family tradition has drawn him towards Lake Area Tech. Although he doesn’t particularly enjoy school, Grill says he prefers to be outside with nature and his animals, he hopes to pursue an additional two year degree in finance at Chadron State College in Nebraska.

In addition to Grill’s ambitions of school and entrepreneurship, he has an overflowing passion for Cowboy Poetry and writing short stories. For Grill, writing started as a hobby after falling in love with the “Hank the Cowdog” series by author John R. Erickson. Grill began writing short stories based on the adventures of Hank and was soon writing stories about his own experiences on the ranch his family manages by Pringle. He would write about a myriad of topics, from life on the ranch and things that would go wrong to stories of coyote hunting. Grill even wrote stories about hunting from the coyote’s perspective as the prey.

Being inspired by Hank the Cowdog, Grill went so far as to write the author of the series, John R. Erickson. They began corresponding back and forth, with Erickson critiquing a story of Grill’s, at his own request. Grill continues to write short stories about life on the ranch and features his two dogs Doss and Riz in many of his stories.

Some of Grill’s writing work has been featured in the Edgemont Herald Tribune, and may, on occasion, be featured again in a future edition of the Fall River County Herald.

In addition to short stories, Grill has been interested in Cowboy Poetry after being introduced to it 12 years ago by his grandpa and grandma. No stranger in reaching out to the professionals, Grill managed to get in contact with Cowboy Poet Ken Cook, who ended up helping Grill with a school project.

Grill has taken his interest in Cowboy Poetry a step further by learning to play the guitar. After some motivation by Grill’s parents to learn an instrument, he thought the guitar would be the perfect instrument to accompany poetry. Grill hopes to get more involved in Cowboy Poetry, the guitar and adding a little bit of old western humor to go alongside his poetic interests.

Grill has big ambitions for such a young man, but if his drive and interests are any indication of future successes there is no doubt Braden Grill has big things ahead of him. In the meantime, Grill will continue to fill his days with daily chores starting at 6 a.m., school, sports, music, ranching, hunting and writing.

With all his interests and a lifetime ahead of him, Grill confirmed his top three most important endeavors. His number one interest in life is to continue ranching as he feels it is an important family tradition, and more notably, he absolutely loves that way of life. Number two on his list is serving in the Navy. Grill feels strongly about the Navy and stated, “It’s the right thing to do to serve my country.” Coming in at number three next to ranching and the military is becoming a diesel mechanic. Although Grill has a strong passion for writing and poetry, he stated that he would like that to remain a hobby that he can carry with him throughout his life. Focusing on ranching, military service and mechanics will allow Grill to follow family traditions while also paving the way towards a successful and prosperous future.

Braden Grill poses with his English Shepherd “Doss,” whom Grill named after Desmond Doss, the combat medic from the movie Hacksaw Ridge. A true story of a man who wanted to fight for his country but not carry a weapon. He had a strong faith and carried a bible into combat. After losing his bible while saving numerous wounded soldiers on the ridge at Okinawa, he risked his life to find it.